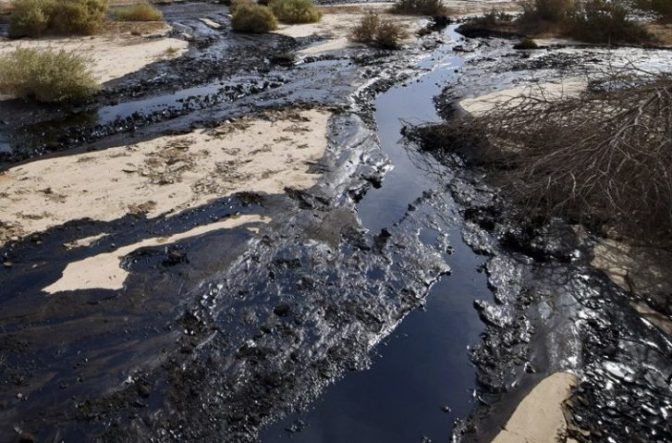 An estimated 150 miles from the location of the months-long protests over the Dakota Access pipeline and its threat of Standing Rock Sioux tribe’s water supply, a pipeline in the western part of North Dakota has reportedly spilled over 130,000 gallons of oil into a creek.

The Belle Fourche pipeline lost a total of 4,200 barrels of crude oil, or over 176,000 gallons, before operators shut it down. The majority of the oil ended up in the Ashe Coulee Creek. Wendy Owen, the spokeswoman for Wyoming-based True Ceompanies, which owns the pipeline, said it is unknown exactly what caused the spill, though she claims the prevailing theory regards the pipeline being buried on a hill near the creek. The “hillside sloughed,” potentially rupturing the line.

Due to a blizzard that occurred last week, it’s been difficult to asses the full damages and environmental impact of the spill. It is unknown when the pipeline initially began to leak. “We have no estimate on when or if it will be operational,” Department of Health spokeswoman Jennifer Skjod said of the pipeline.

According to the Associated Press, the company has declared 36 other spills since 2006, which accumulates to more than 320,000 gallons of petroleum products. The majority of the 6-inch steel Belle Fourche pipeline is underground, though a portion of it was built aboveground, where it crosses Ashe Coulee Creek. Owen noted that the pipeline was built in the 1980s, and used to harbour oil from oil wells close by.

Bill Suess, an environmental scientist with the North Dakota Health Department, explained that the recent pipeline spill was discovered Monday by a landowner near Belfield. He also said that the spill covered about six miles of the creek, damaging an unknown amount of private and U.S. Forest Service land residing along the waterway. Though the creek connects to the Little Missouri River, Seuss assured no oil had gotten that far, and so people need not be concerned over the threat of their drinking water. Though the creek was free-flowing when the spill took place, the water is now frozen. Roughly 60 workers came to the site on Monday to take part in the cleanup, but some of the oil is trapped beneath the frozen creek, making it difficult to truly assess the damages.

“It’s going to take some time,” Suess said. “Obviously there will be some component of the cleanup that will go toward spring.”

Oil-field related spills have given True Cos. a bad reputation. This includes a January 2015 pipeline break into the Yellowstone River, in which the 32,000-gallon spill temporarily halted water supplies for the community of Glendive, Montana. The city, which resides downstream from the river, discovered oil in their water treatment system.

Kevin Pranis, a spokesman for the Laborers District Council of Minnesota and North Dakota, which represents some workers behind the $3.8 billion Dakota Access pipeline that covers four states, noted that regulators need to ensure better oversight of the True Cos.