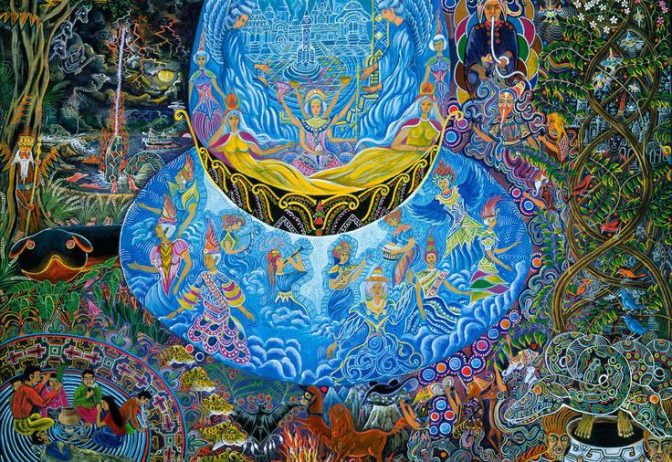 Ayahuasca and the Icaros

Every culture has a collection of folk songs passed on through oral tradition. Many of these tunes are at risk of disappearing due to lack of interest from the general public. Fortunately, the indigenous shamanic music of Peru seems to have found a life raft. Over the past few decades, Ayahuasca tourism has created an economic incentive for the preservation of Peru’s ceremonial songs. People come from all over the world in search of the physical and emotional healing properties associated with this herbal elixir. Communion with plant medicine marks the beginning of a long journey; it can take years to integrate these powerful transformative experiences.

According to the Shipibo-Conibo shamans, ayahuasca is a master plant that opens up spiritual gates through which other Amazonian plant spirits can enter. Each plant in the jungle has its own medicinal properties as well as a unique melody, which the shamans call icaros. The plant melodies are chanted during ceremony to contact the ancestors, take away dark spirits, and protect the integrity of the ritual space.

I sat in a three-day ayahuasca ceremony during Spring of 2009. During this period I was introduced to a variety of plant medicine songs. One of the icaros followed me home and remained in my consciousness for many months. Nobody had explained to me that these songs were connected to plants. They seemed like children’s songs to me. It was only later that I learned about the botanical aspect of the icaros.

Cascadian Herbs and the School of Forest Medicine

In 2014 I was reintroduced to plant medicine music of a different variety, through the work of Scott Kloos, a Portland-based herbalist who specializes in plants from the Cascadian bioregion. His school of forest medicine takes a non-psychoactive approach to meditating with plant spirits. During retreats into the woods, people sit alone with a plant for hours at a time, connecting with the plant spirit and allowing a song to come through their voice naturally. Scott has shared some of his own plant songs on the school’s website. They often resemble Amazonian icaros in their beautiful melodic and aesthetic simplicity.

Around the same time that Scott’s work appeared in my life, I had started writing my first book, Astromusik. As a musician with an academic background in theory and composition, I had taken a road less traveled and attempted to trace Western music back to its esoteric origins in alchemy, astrology and witchcraft. Drawing ideas from ancient Greek and Hebrew mysticism, along with techniques from European and American magical groups, I formulated a practical approach to music composition that would secure its place in the world of ceremonial magick.

The most important element in Astromusik is the practical technique of musical cryptography. I demonstrate how words can be translated letter by letter into a series of musical notes to produce a chromatic melody, often requiring the use of multiple key signatures and chord changes within a single song.

Over the past three years I have written dozens of devotional songs for plants by translating their common English and Latin names i nto melodies using the method taught in Astromusik.

Here is how it works: I sit down at a piano keyboard and drink a tea or tincture of the plant. As the plant medicine moves through my body, I begin playing the melody slowly, observing how clusters of notes naturally bind to one another like stars in a constellation. The plant guides me intuitively toward the chord progressions that will best support the melody, so that the final song sounds like a symbolic representation of how my body experienced the plant.

In Spring 2016, I partnered with herbalist and magician Casandra Johns to come up with a six-month plant music composition ritual. We created a map of the human spine that attributes the cardinal directions to each chakra. A single plant was placed on each directional node, so that each chakra featured four plants total, for a total selection of 28 plants.

A nine-day cycle was allotted to each plant. When one cycle ended, the next one began, and we moved up the spine from the root chakra towards the heart. Nine days provided enough time to connect with each plant, translate the English and Latin names into a melodic cryptogram, and then compose music for it. During this time, Casandra and I would discuss the plant’s history and energetic properties. From these brainstorming sessions, we would then identify six iconic symbols that represented its role within the collective unconscious. As I composed music, Casandra drew images for the plants. Together we created an illustrated soundtrack of our plant medicine journey.

What is Synchronicity Music?

The expression synchronicity music appeared in Philip K Dick’s 1981 novel Valis. The book’s characters are exposed to a trance-inducing music that produces deep visionary states in its audience. This has been accomplished in real life by musicians who embed binaural and isochronous tones into a track subliminally, to regulate brain wave frequencies and draw them down towards the alpha, theta, and delta states. A steady percussive rhythm can achieve similar effects.

There are many pieces of music that achieve a hypnotic effect without the need for binaural brainwave entrainment. Some musicians can successfully enter an altered state of consciousness and transfer part of that experience through the medium of sound.

The Spirit of Damiana: A Strange Attractor

The most exciting application of synchronicity music, in my imagination, is as a strange attractor. This term is used in chaos theory literature to describe an equation that generates a recursive fractal effect. Imagine a method of songwriting that exerts a magical influence upon reality itself, not merely through the mind of an audience, but rather through the psyche of the composers themselves. True synchronicity music would, by virtue of its very existence, generate atemporal and non-linear effects upon the waking dream of life on Earth. Writing and performing this kind of music would transform reality even if nobody ever heard the song. This is the same principle of remote-action that a witch or sorcerer attempts through the recitation of spells.

Allow me to offer an example: For the Gnostic Plant Music ritual, Casandra attributed Damiana to the south node of the sacral chakra, probably because of its fiery aphrodisiac qualities.

The lead character’s in Hunger’s Mate 2 has the same name as me – Ezra – and his younger brother is named Eli. Both characters are jaguars that shape-shift into humans. During a scene in this book, Ezra begins narrating about his experience in the Gunji region of the Amazonian rainforest. He and Eli were studying with a shaman who had given them damiana to heighten their sexual sensitivity.

Coincidentally, I am very close with a friend named Elijah, who is just a couple years younger and is like a brother to me. He works as part of a small team that brings Peruvian icaros sound healers from the Amazon up to Portland. Elijah and I have sat in ceremony together on several occasions. He runs a production company that creates fractal geometric sound mandala videos for the West coast neotribal festival circuit.

Seen through the lens of music as a strange attractor, the audiomancy meditation upon Damiana seems to have opened a fractal portal through which many disparate elements from my own psyche – Amazonian plant medicine, Elijah, the Icaros, and Damiana – were brought together through a fictional narrative in another person’s dream. It is as if the author of Hunger’s Mate pre-cognitively channeled something from the collective unconscious through this scene in her book.

To spell out the magical interpretation of this event in plain language: The spirit of Damiana entered my body and constellated key elements dwelling within my subconscious mind. According to Jung, the subconscious exists interdependently with the collective unconscious, which means that Damiana’s spirit was able to exert an atemporal (outside of time) and non-local effect the author of this book, via her own subconscious mind. A third node in the collective was then activated to discover the book excerpt and show it to me, providing synchronistic confirmation of the efficacy of the musical cryptography method.

I have encountered a subtle bias in spiritual communities towards traditional medicine songs, the implication being that their tried-and-true linkage with the spirits make them the safest and most effective way to establish a connection.

This experiment has led me to believe that plant medicine music does not have to be tied down to one particular aesthetic style. I have a deep appreciation for Peruvian folk music, but I am relieved to know that the plant magic is possible regardless of which instruments and musical styles a person decides to use. Love and devotion are the key ingredients. The limitations are lifted; every genre is permissible.