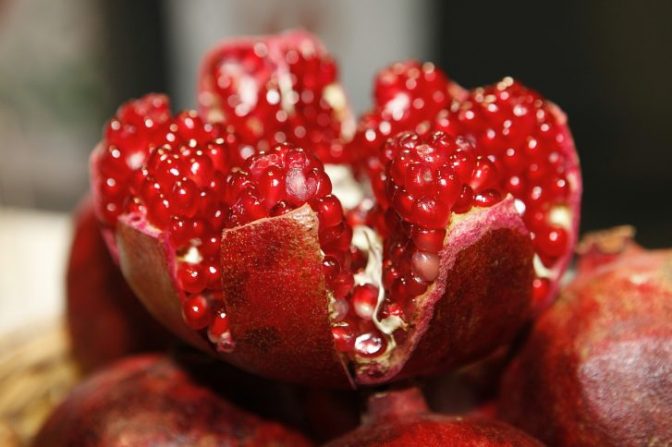 (NaturalHealth365) Heart disease is the number one cause of death in the United States – with nearly 800,000 Americans suffering a heart attack or stroke every year. And, heart disease isn’t likely to relinquish its primacy as a cause of death anytime soon. But, what’s surprising is how pomegranate could help heal the body.

What with the Standard American Diet – laden with unhealthy sugars and fats – and increasingly sedentary lifestyles for many, the risk remains high. However, while mainstream medicine continues to treat heart disease with invasive surgeries and toxic drugs, alternative natural therapies are gaining ground.

Pomegranate juice is emerging as a powerful cardio-protective therapy that can both prevent and reverse cardiovascular disease – lowering risk of potentially fatal heart attacks and strokes.

But pomegranate has been shown to lower risk of heart disease by decreasing oxidative stress, reducing dangerous inflammation and protecting the endothelial cells which line the blood vessels. Researchers have also found that pomegranate extracts can prevent LDL oxidation – thereby limiting damage to cells that line the coronary arteries.

Pomegranate can also increase production of nitric acid, a beneficial substance that neutralizes free radicals and prevents blood cells and platelets from “clumping” along the endothelial cell lining.

In a recent review published in BioMed Research International, researchers praised the pomegranate, scientifically known as Punica granatum, as a “rich source of biologically active compounds.” Sweet, tangy pomegranates get their disease-fighting powers from a group of tannins called punicalagins – as well as an assist from anthocyanidins, a class of natural plant pigments with antioxidant and anti-inflammatory properties.

When it comes to neutralizing harmful free radicals, these polyphenols are serious business. The authors of the review noted that the anthocyanidins in pomegranate have higher antioxidant capability than vitamin E, beta-carotene or ascorbic acid.

And, pomegranate juice was up to 20 percent more potent than such antioxidant powerhouses as black cherry juice, grape juice, green tea and red wine.

It’s official: Pomegranate juice not only slows atherosclerosis – but, reverses it

Laboratory and animal studies show that regular administration of pomegranate juice dramatically slows the growth of plaque formation – and with it, the progression of atherosclerosis.

For instance, in a 2013 study published in Atherosclerosis, researchers noted that pomegranate extract reduced the size of atherosclerotic plaques – while reducing the proportion of coronary arteries that were occluded by plaques.

In another study, one group of patients was given 78 mg of punicalagins – the equivalent to two ounces of juice – daily for a year, while the other group received only a placebo.

The results were impressive!

The researchers found that atherosclerotic lesions in the carotid arteries were reduced by 35 percent in the pomegranate extract group. The control group, on the other hand, experienced a 9 percent increase in lesion occurrence.

In other words, the condition of the control group worsened, while the pomegranate extract group experienced significant improvement – proof positive of the potentially lifesaving effects of pomegranate.

In addition, the antioxidant activity in the pomegranate extract group soared by 130 percent.

Pomegranate works like an ACE inhibitor to lower blood pressure

And, the study yielded more proof of the protective cardiovascular effects of pomegranate.

Researchers found that systolic blood pressure (the top number in the reading, which measures the amount of pressure in the arteries during the heart’s contraction) fell by 21 percent in the pomegranate extract group – a result of decreasing the activity of angiotensin converting enzyme, or ACE.

This is the same mechanism by which pharmaceutical ACE inhibitors work to lower blood pressure, leading some researchers to maintain that pomegranate supplements may be able to replace the use of ACE inhibitors for some patients.

In fact, the University of Maryland Medical Center suggests checking with your physician before taking pomegranate extracts – in order not to lower blood pressure too drastically.

Researchers have found that pomegranate fights plaque and kills microorganisms on teeth that can lead to cavities and gum disease – good news for the heart as well, because pathogens from gum disease are associated with heart disease.
When used in conjunction with Centella asiatia – a medicinal herb known as gotu kola – pomegranate increases the strength of the attachment between teeth and gums and reduces bleeding from gums.

Perhaps most importantly, at least where heart health is concerned, a study published in Journal of the International Academy of Periodontology showed that pomegranate extracts decrease levels of interleukin-1 beta and interleukin-6, a pair of inflammatory cytokines associated with cardiovascular disease.

Bottom line: it is obvious that pomegranate juice and extracts can play a major role in reversing heart disease and keeping arteries clear of dangerous plaque. As if this weren’t impressive enough, researchers say that pomegranate can also help prevent chronic diseases such as diabetes and cancer – a significant roster of benefits to arise from the pleasant habit of drinking a daily serving of refreshing, flavorful juice.