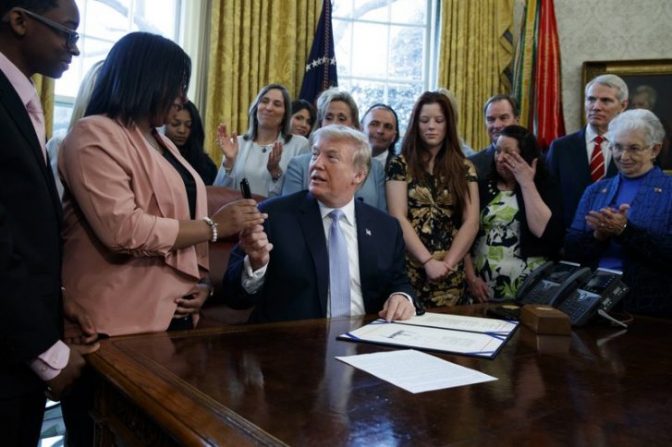 (11 April 2018) President Trump joined the fight against sexually abusive online content with the recent signing of a new law after frustrations arose from classified ad-sites claiming they were not responsible for the abusive content on their domains.  This new legislation holds the site owners liable for the content, effectively closing the loophole which has been used to dodge legal action in the past.

“Most importantly I want to thank the survivors and families who have joined us today.  I am signing this bill in your honor, and we are all together, politicians both republican and democrat, signing this and representing this to you in your honor.” – President Donald Trump

The bill was passed with overwhelming support by Congress, showing Americans that we can set aside our partisan differences to tackle the real issues in our society.

In the following press release, President Trump went on to express his concern for the alarming statistics that revealed how truly rampant the sex trafficking problem was, regretfully reporting that the situation is worse than it has ever been in history.

Yvonne Ambrose, the mother of a 16 year old victim of online prostitution and murder, expressed her gratitude to President Trump as she trembled with sorrow.

“Unfortunately my daughter was not the first person this has happened to, and thanks to you and everyone here, hopefully there won’t be many more after her that have to endure this pain.  The pain that is brought on my family is unimaginable.”

You can also join the fight against human trafficking and sexual abuse by first, learning how deep this problem truly goes, and second, by engaging with the ITNJ.  The International Tribunal for Natural Justice is on the front lines of this issue, exposing the truth on the worldwide epidemic of modern slavery.  You can help us by ratifying the treaty, donating, volunteering, and/or submitting your testimony for the next ITNJ seating.