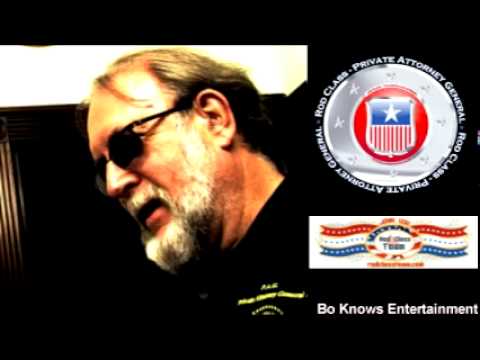 Rod Class, the notorious Private Attorney General, has acted on behalf of all US citizens, obtaining many Administrative Rulings stating that all Government Officials are “Private Contractors”.  Mr. Class’s first suit accused and charged North Carolina State departments with the Embezzlement of Federal funds as well as violations of the Right To Travel issue (Case No. 10 DOT 7047).  He now continues to expose the corrupt behavior prevalent in political authority.

Follow this audio link to tune into Rod Class speaking on the ITNJ: http://recordings.talkshoe.com/TC-48361/TS-971835.mp3

“Think of it as a newborn baby.  A baby don’t come out walking, talking, and with a college degree, ready to run a business.  The United states, when it started back in the 1700s, wasn’t a Nation.  It wasn’t a fully developed country whenever the pilgrims came over here and said ‘okay, were here, this is now the United States of America, and were now the government.’  It didn’t work that way.  Anything new takes time to develop, and the development of that goes back to people that are working on it.” – Rod Class

Restoring the Rule of Law, the International Tribunal of Natural Justice is a court being created for the people.  Contribute to this valiant initiative at http://itnjcommittee.org/projects/contribute/

Offering you the keys to freedom, the Sovereign Voice magazine provides an editorial outlet for the emerging Sovereignty movement.