Protests Persist in Brazil: Calls For Impeachment on President’s Birthday 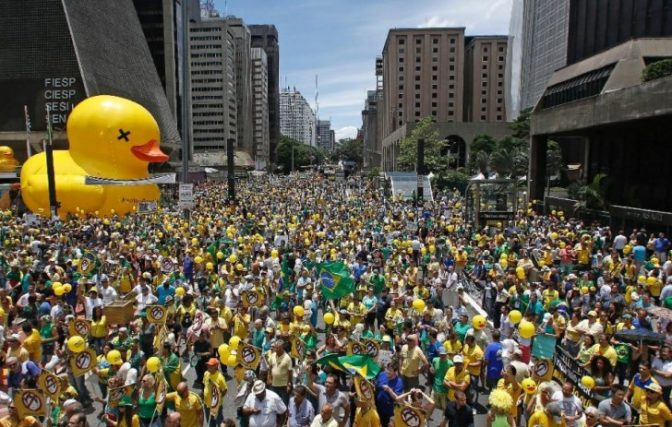 (Era of Wisdom) Rio de Janeiro — This weekend, “up to a hundred thousand” people protested in Rio de Janeiro and across Brazil, calling for the impeachment of president Dilma Rousseff as they have been for a long time, in the midst of a corruption scandal involving an oil company. Today happens to be her birthday.

A few weeks ago, it looked like Rousseff actually might be impeached. The potential victory of the people was dampened by Brazil’s supreme court when they “suspended her impeachment.”

To understand what is happening here, one would have to closely examine the recent history of this situation. Asking a person in Brazil what is happening would probably be the best way to get insight on the topic.

According to International Business Times–

“Up to 100,000 protesters gathered in the financial district on 13 December for the demonstration led by Brazilian anti-government group Vem Pra Rua (Come To The Street).

Leader of the group Michael, said: ‘The street movements are helping to change this country. We had a senator arrested, a bank president arrested, the owner of a major construction firm and the owners of other big companies arrested.’

A few video clips were released by RT.

According to the NY Times–

“Many Brazilians were particularly frustrated that the person who started the impeachment proceedings, Eduardo Cunha, the speaker of the lower house, is himself fighting calls to resign over undeclared Swiss bank accounts and charges that he accepted millions of dollars in bribes in the kickback scheme surrounding Petrobras, the national oil company.”

“Last week, the court ruled 8 to 3 that campaign donations from corporations were unconstitutional.

The Brazilian ban on corporate donations comes amid an extensive corruption scandal that has reached all the way to the Brazilian presidency, with citizens calling for President Dilma Rousseff to be impeached.

During the Brazilian elections last year, close to 76% of the total $760 million donated to the campaigns for congress and the presidency, came directly from corporate sources, according to The Guardian.”

The last 3 years have seen particularly strong activist movements emerge in Brazil. A “Brazilian Spring” of millions came out in opposition to this regime in 2013, simultaneous with Egypt’s 14 million strong “largest protests in the history of the world.” At both of these “protest springs,” the people wore iconic Guy Fawkes masks.