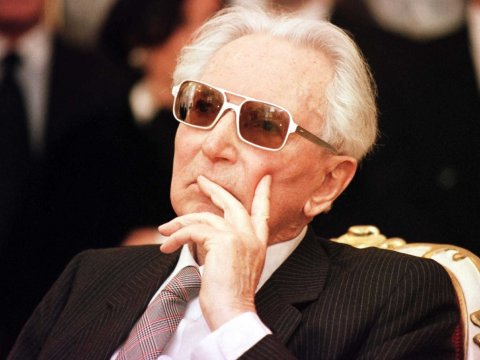 Are you happy? It’s a loaded question that many of us cannot simply answer yes or no to. Yet it’s something we ask ourselves and others, and often. But perhaps we shouldn’t be focusing on happiness. Perhaps happiness is the byproduct of a meaningful life. This is how Viktor Frankl sees it, anyway.

In September 1942, the well-known Jewish psychiatrist and neurologist residing and working in Vienna was arrested and taken to a Nazi concentration camp along with his wife and parents. After three years, the camp in which he was imprisoned was liberated. Frankl lived, but his pregnant wife, along with the majority of his family, did not.

When one is reduced to a mere number — 119104 — for three years, being stripped of your right to freedom and life, how does one survive? Frankl’s 1946 bestselling book, Man’s Search for Meaning, written in just nine days, explores this question through the experiences he endured at the camps. His answer illumines an essential part of what makes us human. The difference between those who had lived and those who had died, he says, came down to the idea of “meaning.”

Frankl worked as a therapist in the camps, and came to find that there was an overwhelming sense of hopelessness that consumed many inmates. In his book, Frankl discusses two suicidal inmates who had come to believe there was nothing to live for.

Frankl writes: “In both cases, it was a question of getting them to realize that life was still expecting something from them; something in the future was expected of them.” One of the men discussed the importance of his young child, who was living in a foreign country at the time. The other man focused on a series of books he needed to finish.

This uniqueness and singleness which distinguishes each individual and gives a meaning to his existence has a bearing on creative work as much as it does on human love. When the impossibility of replacing a person is realized, it allows the responsibility which a man has for his existence and its continuance to appear in all its magnitude. A man who becomes conscious of the responsibility he bears toward a human being who affectionately waits for him, or to an unfinished work, will never be able to throw away his life. He knows the “why” for his existence, and will be able to bear almost any “how.”

Meaning is something that is so easily overlooked in comparison to happiness, but Frankl’s understanding of why we need it is impactful because it brings to the surface the truth that, in the face of suffering, we find a great light by looking beyond our immediate situation.

Frankl found that meaning came from three possible sources: purposeful work, love, and courage in the face of difficulty.

Regarding the “intensification of inner life” that helped prisoners stay alive, he discusses the transcendental power of love: “Love goes very far beyond the physical person of the beloved. It finds its deepest meaning in his spiritual being, his inner self. Whether or not he is actually present, whether or not he is still alive at all, ceases somehow to be of importance.”

He uses the example of his wife, who gave him a sense of meaning:

We were at work in a trench. The dawn was grey around us; grey was the sky above; grey the snow in the pale light of dawn; grey the rags in which my fellow prisoners were clad, and grey their faces. I was again conversing silently with my wife, or perhaps I was struggling to find the reason for my sufferings, my slow dying. In a last violent protest against the hopelessness of imminent death, I sensed my spirit piercing through the enveloping gloom. I felt it transcend that hopeless, meaningless world, and from somewhere I heard a victorious “Yes” in answer to my question of the existence of an ultimate purpose. At that moment a light was lit in a distant farmhouse, which stood on the horizon as if painted there, in the midst of the miserable grey of a dawning morning in Bavaria. “Et lux in tenebris lucet” — and the light shineth in the darkness. For hours I stood hacking at the icy ground. The guard passed by, insulting me, and once again I communed with my beloved. More and more I felt that she was present, that she was with me; I had the feeling that I was able to touch her, able to stretch out my hand and grasp hers. The feeling was very strong: she was there. Then, at that very moment, a bird flew down silently and perched just in front of me, on the heap of soil which I had dug up from the ditch, and looked steadily at me.

Frankl also says that humour is “another of the soul’s weapons in the fight for self-preservation.” He writes:

It is well known that humor, more than anything else in the human make-up, can afford an aloofness and an ability to rise above any situation, even if only for a few seconds. . . . The attempt to develop a sense of humor and to see things in a humorous light is some kind of a trick learned while mastering the art of living. Yet it is possible to practice the art of living even in a concentration camp, although suffering is omnipresent.

Frankl’s outlook directly opposes that of today’s culture, which is so focused on the pursuit of individual happiness that it neglects the search for meaning. “But happiness cannot be pursued; it must ensue. One must have a reason to ‘be happy,’ ” Frankl writes.

Research has shown that having purpose and meaning in life increases overall well-being and life satisfaction, improves mental and physical health, enhances resiliency, boosts self-esteem, and decreases the chances of depression.

Yet according to the Center for Disease Control, about 4 out of 10 Americans have not discovered a satisfying life purpose. Forty percent either do not think their lives have a clear sense of purpose or are neutral about whether their lives have purpose. Nearly a quarter of Americans feel neutral or do not have a strong sense of what makes their lives meaningful.