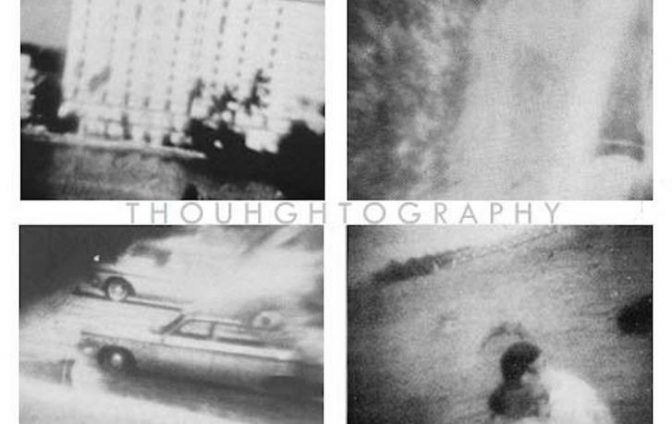 Ted Serios was a Chicago-area bellhop who claimed he could transfer his thoughts directly from his mind onto Polaroid film through a process he called Thoughtography.

Ted Serios was the last person anyone would consider to be a “mystic”, yet in his lifetime he conducted a series of incredible experiments where his thoughts directly reflected onto photographs, using a process he called Thoughtography.

Freudian psychiatrist Jule Eisenbud described Serios as a “psychopath and sociopath, unable to exert self-control or abide by the laws and customs of society”, yet he strongly endorsed Serios’ metaphysical abilities. Oddly enough, each Thoughtograph was made while Serios was profoundly drunk.

The photographs were produced in a few ways, but the most common was using a device which Serios called a “gizmo” which he attached to his forehead. The gizmo consisted of a small section of tubing which was fitted with a piece of photo squeegee. Each of the images produced resembled postcard scenes, which showcased buildings or streetscapes surrounded by dark areas – most of the images were out of focus or skewed. Serios also was able to project images psychically onto film without the gizmo, creating photos he called “blackies” or “whities” (entirely black or white Polaroids).

Whether this was an elaborate hoax, or a paranormal miracle, is still up for debate. Some seriously contest Serios’ work and Eisenbud’s acceptance of it, while others are still baffled/amazed at how this was possible.

If you’d like to learn more about Serios’ Thoughtography, check out the documentary below!