Putin Unveils ‘CryptoRuble’ as Assange Thanks US Gov’t Corruption for 50,000% Return on Bitcoin 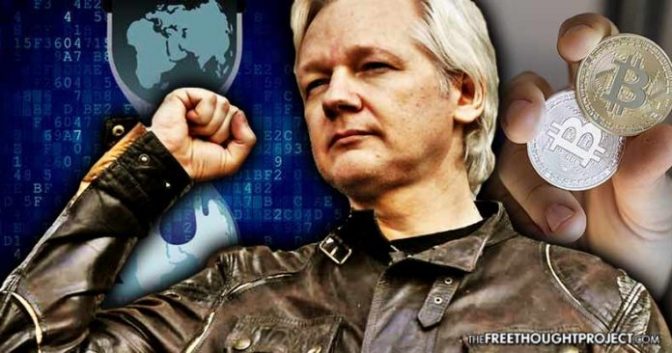 Over the weekend, WikiLeak’s Julian Assange took to social media to give his “deepest thanks to the US government, Senator McCain and Senator Lieberman for pushing Visa, MasterCard, Paypal… et al, into erecting an illegal banking blockade against @WikiLeaks starting in 2010.”

In April 2010, WikiLeaks released footage from a Baghdad airstrike in July 2010 in which revealed Iraqi journalists and others being brutally slaughtered by American forces in what became know as Collateral Murder. Additionally, 2010 releases by WikiLeaks also included the Afghan War Diary and the Iraq War Logs.

Following the release of the explosive secret government documents related to wars in Afghanistan and Iraq – which revealed the wars in all their barbarity — Sen. John McCain and Sen. Joe Lieberman, both known war party/deep state commodities, led a bipartisan effort to cut the flow of donations to WikiLeaks by forcing ‘traditional’ payment systems to block them and disallow donations to the transparency activist government watchdog group.

Subsequently, Julian Assange and WikiLeaks became early adopters of the Bitcoin cryptocurrency, as a means of bypassing the US government’s financial blockade meant to shut down all avenues of public donations to WikiLeaks.

With the value of Bitcoin hitting $5,746.51, Assange took the opportunity to thank the villainous forces in their failed attempt to financially strangle WikiLeaks out of existence, as it precipitated the group’s initial 2010 investment into Bitcoin, and a whopping 50,000 percent return on investment, according to his tweet.

The Wikileaks founder posted his comment on Twitter, after a stunning week of price jumps in the cryptocurrency’s value. The tweet was accompanied by a chart of the value of Bitcoin.

It’s clear that Assange understands the value of having a peer-to-peer based system that bypasses governmental control and regulation, and allows for maximum individual control over one’s own financial instruments – with minimal outside interference or costs.

Assange has been living as a political refugee in the Ecuadorian Embassy in London since 2012.

It seems clear that the advent of blockchain distributed ledger technology, and the ability of the technology to remove the “gatekeepers” of industry and revolutionize numerous systems – from money transactions, to contracts, voting and more – is not lost on Assange as in many ways he leads a parallel fight in regards to freeing information from the clutches of societal gatekeepers.

Ironically, the US government forced WikiLeaks into Bitcoin investing as a means of circumventing the financial blockade they attempted to enforce on the whistleblowing group, only to have them reap a windfall due to the dramatic rise in the demand for the leading cryptocurrency.

Interestingly, Russia’s development bank, VEB, and several Russian state ministries are reportedly teaming up to develop blockchain technology. Russia plans to create a fully encrypted, distributed, inexpensive payments system that has no dependence upon Western banking institutions, SWIFT, or the U.S. government to move money across the world.

Minister of Communications, Nikolay Nikiforov, confirmed that Russian President Vladimir Putin has officially stated that Russia will issue its own ‘CryptoRuble’ during a closed-door meeting in Moscow, according to local news sources.

According to a report by the Bitcoin-focused website CoinTelegraph:

Russian President Vladimir Putin has officially stated that Russia will issue its own ‘CryptoRuble’ at a closed door meeting in Moscow, according to local news sources.
The news broke through Minister of Communications Nikolay Nikiforov.

According to the official, the state issued cryptocurrency cannot be mined and will be issued and controlled and maintained only by the authorities.

“I confidently declare that we run CryptoRuble for one simple reason: if we do not, then after 2 months our neighbors in the EurAsEC will,” Nikiforov said.

Although the announcement marks Russia’s entrance to the cryptocurrency world, it is no affirmation of Bitcoin or any other decentralized cryptocurrency. In fact, Russia recently called for a complete ban on all cryptocurrencies within Russia.