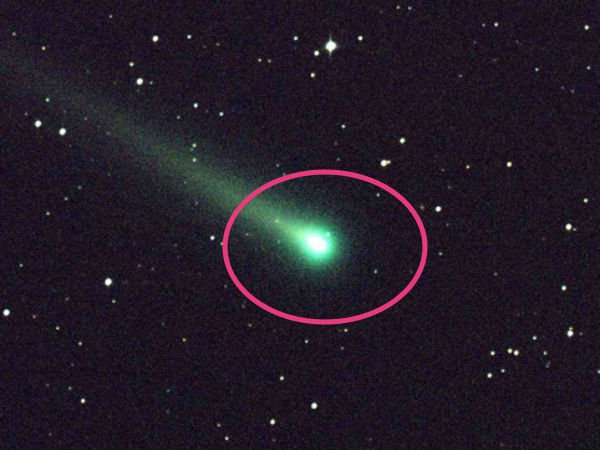 For many, 2016’s New Year’s Eve was a celebration to let go of the negatives that seemed to haunt the year. But even more than the flashy city lights, sparkly dresses, and vibrant fireworks, to ring in 2017 was to view a cosmic light show, as Comet 45P/Honda-Mrkos-Pajdušáková passed near the moon on Saturday. But it’s not over yet, and skywatchers still have a chance to take in the sights.

The comet, which only comes around once every five years, is currently zooming through the inner Solar System. According to Paul Chodas, manager of NASA’s Centre for Near-Earth Object (NEO) Studies, the comet “has a good chance of becoming visible through a good pair of binoculars, although we can’t be sure because a comet’s brightness is notoriously unpredictable.”

Because comets consist of ice, dust, and rocky material, they make following a pattern of predictability for researchers to use extremely difficult. Upon approaching the Sun, they typically heat up rapidly and begin to shed material that leaves behind a mesmerizing dust trail. This transformation can significantly affect how visible comets are in the night sky, with some being brighter, and others much darker.

Though little is still known about comet C/2016 U1 NEOWISE, researchers predict its orbit around the Sun may be nearly millions of years long, making this sighting the first time the comet has passed through the inner Solar System. Given this prediction, this will be the last time we can witness the comet this close to Earth in our lifetime.

The comet made its closest pass to the Earth on December 13, at a distance of about 106 million km. This week, it will be around 140 million km away as it approaches the Sun. This is around 350 times farther away from us than our Moon (meaning there’s no reason to worry about it hitting us.)

Skywatchers can expect to get the best show of the comet zooming by this week by looking to the southeastern sky just before dawn.

“At its brightest, comet C/2016 U1 NEOWISE will pass through the constellations Ophiuchus to Serpens Cauda and Sagittarius, and is best visible in the dawn sky 12 degrees from the Sun at maximum brightness,” Universe Today said.

On January 14, the comet will be at its closest point to the Sun, where it will be right inside the orbit of Mercury, and then will finally head back to the outer Solar System. There may be one last chance this month to see the show, however, on the last day of the month for those residing in the Southern Hemisphere.