Recycling Waste to Save Energy 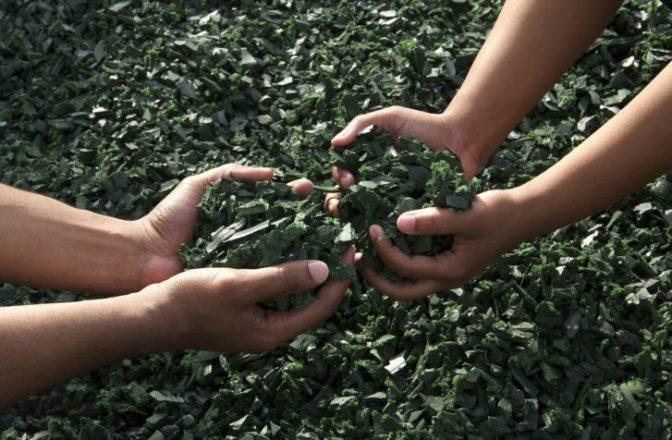 About 90 percent of all garbage in the United States is hauled and buried in landfills. If this continues, the landfills for half of all cities will be filled to capacity by 2000, a survey by the National League of Cities has shown. Establishing new landfills is difficult because people do not want garbage dumped and buried near their home or property for aesthetic and environmental concerns. Recycling waste not only alleviates the problem of too much garbage, but also saves energy, natural resources, and the costs of disposing of solid waste. According to the National Solid Waste Management Association, only four percent of the 165 million tons of residential post consumer waste produced annually is recycled into usable material. Post consumer waste is that product that has completed its original intended useful life and has been discarded by the consumer. Other wastes occur in the manufacturing process and are recycled internally where economic. Much more – 30 percent – is recyclable, but large-scale recycling is largely dependent on source separation – consumers sorting the different products such as aluminum cans, newspaper, glass and plastics. This fact sheet pertains to post consumer waste only. For industrial recycling information contact trade associations in the respective fields.

Recycling aluminum is not without its problems, however. Producing new aluminum creates toxic emissions from the plant. To comply with regulations established by the Environmental Protection Agency, the aluminum industry is developing better anti-pollution devices. Economically, this is a problem because the industry has limited funds to allocate for research and development of better equipment to control pollution.

In 1986, all aluminum recycled – some 2.2 million tons – saved 30 billion kWh, enough electricity for more than 3.3 million homes for one year. However, recycling this aluminum, excluding aluminum cans, creates mixed aluminum alloys, and there is not a strong demand for these alloys. Other problems include: contamination of aluminum scrap with trace elements such as lead, tin, and iron; difficulty in visually identifying and separating large volumes of scrap by type of alloy; the inability of municipalities to establish long-term contracts for purchasing aluminum scrap, limited capital for resource recovery plants; high transportation costs; and costs of disposing of low-value scrap residue from recycling plants.

Using recycled glass in glass production could save about 30 percent of the energy usually required when producing glass from raw materials. Energy is saved because crushed glass, called cullet, melts at a lower temperature than the raw material used to make glass. In addition to saving energy, using cullet to produce new glass reduces the amount of noxious emissions as compared to that produced by making glass from sand, soda ash, or limestone.

Consumers recycle at least 7.5 percent of the total glass produced annually (11 millions tons). To increase the public’s awareness that glass can be recycled, at least nine states have begun funding programs to encourage the recycling of glass. There are several state glass recycling associations. For more information on these programs, contact the Glass Packaging Institute, 1801 K St. NW, Washington, DC 20006. In the private sector, the industry has formed partnerships with states and local governments to set up voluntary collection centers. Such partnerships exist between industry and 22 states. Many of these programs are successful even though the majority of the public is not aware of the recycling opportunities within their states. The industry views the public’s lack of awareness, however, as secondary to the greater problem of transportation costs. The cost of transporting glass to a plant makes recycling no longer cost-effective. Another concern is the requirement to separate colors of glass, since a manufacturer of clear glass cannot use colored glass cullet.

Residents of many towns and cities also collect newspaper for recycling. To give you an idea of how many trees are used for newsprint paper everyday, it takes about 75,000 trees to produce the press run of one Sunday edition of the New York Times.

In 1986, the nation’s newspapers collectively required 13 million tons of newsprint. Consumers collected and recycled about 30 percent of this total demand in 1986, but much more could be recycled. The paper industry believes that to get more people involved in recycling paper, municipal governments should create programs to augment rather than replace programs run by volunteers and businesses. This preserves the long-standing opportunity to raise money for groups such as the Boy and Girl Scouts, schools, churches, and civic organizations.

Other types of recyclable paper include corrugated boxes, mixed papers from offices and industrial plants, and computer printout paper. According to the American Paper Institute, about 28 percent of all paper and paperboard consumed in the United States is being recycled. Higher grade paper such as that from offices can be used to make a variety of products including newsprint, grocery bags, stationery, paper for magazines and books, facial tissue, paper napkins and towels, diapers, and other sanitary products. The paper industry has designed two symbols for consumers to easily recognize recycled and recyclable products.

Recycling paper saves energy, water, space at landfills, and disposal fees. The paper industry saves about 20 percent of the energy required to make paper and paperboard from fresh lumber. Recycling paper also saves about 50 percent of the water required to produce paper from fresh lumber and alleviates the shortage of space at landfills, When waste paper is recycled instead of buried, each ton of waste paper saves the charge to municipalities for dumping, often called the tipping fee. Many landfills, especially in the Northeast where the waste disposal problem is most severe, charge at least $50 per ton.

As a new technology, only one percent, or about 100,000 tons of all post-consumer plastic, has been reaching recycling plants. Most recycling of plastic has focused on the two-liter soft drink bottle since its introduction in 1979. The bottle is made of polyethylene teraphthalate (PET), with its base cup made of high density polyethylene (HDPE). About 20 percent or 72 thousand tons of all PET bottles produced are being recycled each year. Most have come from nine states with legislation requiring that the consumer pay a small deposit for each bottle in addition to the regular cost. Consumers receive a refund of deposit when they return the bottles to the store or distributor. Hence the challenge for plastic recycling is to recover PET bottles from consumers in states without legislation requiring deposit, or encourage passage of legislation requiring deposit, or encourage passage of legislation in more states.

Recycled PET bottles can be used to make products including bath tubs, appliances, and fiberfill.
More plastic could be recycled if PET bottles were included in curbside collection programs. Thus far, most programs have been for collecting newspaper, glass, and aluminum cans.

Another barrier to recycling post-consumer plastic is that unlike recycling cans and glass, it cannot be recycled into the original product. Also, recycling plastics is more complicated because it is difficult and expensive to distinguish different types of plastic from one another, and each requires different specifications for recycling.

For plastics that cannot be sorted, the industry has developed many uses for recycled and mixed plastic such as fences, park benches, picnic tables, traffic sign posts, floating docks, and flooring.
In addition to recycling, plastics can be burned and converted to electricity or steam at waste-to-energy plants. Burning plastic provides significantly more energy than burning other garbage – 19,000 Btu per pound for plastic as compared to 4,000 Btu per pound for non-plastic garbage. Critics debate that burning plastic (particularly PVC) produces toxic emissions such as dioxin and furan. However, all the controlled tests refute this hypothesis.

Recycling offers a variety of benefits. For example, it reduces the amount of waste that flows to our dwindling landfill resources and the pollution potential from landfill. It can help preserve the natural landscape by decreasing the mining of raw materials. And it provides a way to raise funds for schools, service clubs, churches, Boy and Girl Scouts, and other civic organizations. To the extent that recycling replaces curbside collection of trash, it reduces the taxes that would be levied for all solid waste management and in any case displaces the disposal cost.

Recycling and incinerator or other energy recovery are mutually beneficial. Removing metals and glass actually improves combustion processes and reduces heavy metals in ash. Incinerators provide alternative outlets for combustible recyclables when markets are poor or have failed. Most cities will need to use both waste-to-energy plants and recycling programs to alleviate the problems of overflowing landfills.

Despite the list of benefits, many local governments have not developed comprehensive plans for recycling, even as waste disposal costs have escalated to more than $100 per ton in some places. The two most often cited barriers to recycling are cost and lack of convenience. Officials also recognize the lack of demand or markets for recycled materials. Local officials question the economics of recycling. Are the costs of labor, transportation, equipment, publicity, administration, and other costs less than the costs of alternatives such as incineration? How can municipalities impress upon people the importance of their participation and make recycling more convenient?

One method is the curbside program. Consumers sort their recyclable garbage into at least one container. Each material may be sorted into its own container, or all recyclables may be sorted into a single container and those sorted by type of material at a collection center. From homes and collection centers, municipalities transport it to recycling facilities. The Glass Packaging Institute states that curbside recycling takes about 15 minutes per week, and that curbside recycling nationwide could decrease the volume of solid waste 15 to 25 percent.

Many city governments operate successful recycling programs. For example, Minneapolis, Minnesota can boast that an estimated 25 to 30 percent of its 300,000 residents living in single family homes contribute monthly to the voluntary recycling program. Since the city began curbside and alleyside pickups twice a month in October 1987, it has collected an average of 750 tons per month. Only five full-time employees operate the program. The City contracts with two refuse collection companies and one nonprofit organization to collect aluminum and tin cans, all colors of glass, newsprint, and baled cardboard and boxboard. People have learned about the program from direct mailings and brochures distributed by a network of about 2,500 volunteers. These volunteers, called “block leaders,” also post signs before pickup days, answer citizens’ questions, and help boost participation. About half of the volunteers were recruited with a coupon in each brochure which asked residents to send their name to the City’s Department of Public Works. The City of Minneapolis and Hennepin County equally share the cost of the program.

How to Get Involved in Recycling

Locate recycling centers in your area. Start by checking the Yellow Pages under recycling, resource recovery, or the specific item like glass, paper, aluminum, or plastic. Check with your local and state governments; try the Department of Environmental Resources. Some questions to ask the recycling center include: rates, hours of operation, procedures for cashing in the products. Do they offer assistance to groups that use recycling as a fund-raising project? Are there any promotional resources available such as posters, bumper stickers, fliers, or films?