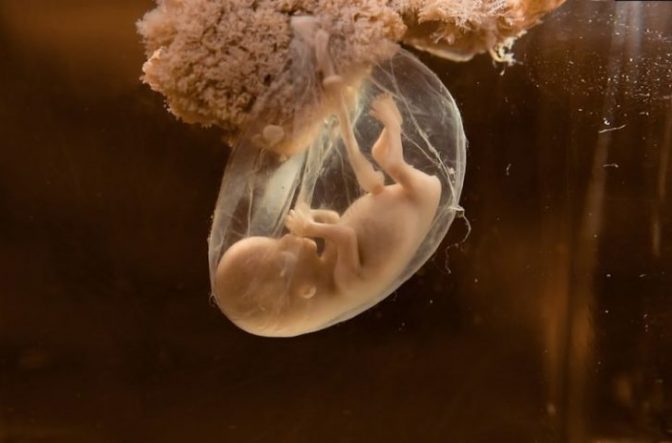 We’ve come to know that human females giving birth is often a difficult and painful occurrence. But why? Researchers have generated a new theory that may give us some answers.

According to a small team of researchers with members from Austria and the U.S., evolution favoured small female pelvises and large newborns for warranted reasons. They also claim the rise of cesarean sections in recent decades may be causing the gap between the size of newborns and their mothers’ pelvises to widen — a 10 to 20 percent increase to be specific.

The researchers, whose results were published in Proceedings of the National Academy of Science, note that babies’ heads are getting bigger, while the birth canal size remains fixed.

For their findings, the team used logic and math. Logically speaking, if babies with oversized heads are allowed to survive into adulthood as opposed to dying during birth, which human history has undeniably seen, and carry on the genes for larger heads, then it only makes sense that more babies with the same genes will be born in the future with this sizeable difference. And yet. they will be healthier than smaller babies, which increases the odds of reproducing.

To see how this logic held up with math, the team crunched birth data numbers spanning the past half-century. They concluded that the global rate of fetopelvic disproportion has risen from 3 percent of births in the 1960s to 3.3 percent of births today, hence the 10 to 20 percent rate of increase previously noted.

“Evolution is happening even in our modern society,” noted study lead author Philipp Mitteroecker, who is an assistant professor with the Department of Theoretical Biology at the University of Vienna, Austria.

But why has the human female pelvis remained so small, despite evolution? And why don’t other mammals have this issue?

“The dimensions of the infant head and shoulders are very close to and even exceed the dimensions of the mother’s birth canal in humans,” explained Wenda Trevathan, a professor emeritus of anthropology at New Mexico State University. But this is not the case for other mammals. “Labor contractions are probably painful for most mammals, but I think it’s safe to say that the long labor required to birth a human baby is more painful and difficult than the apparently shorter labors of other mammals, including apes.”

Mitteroecker theorizes that human females need smaller pelvises to walk on two feet, though he acknowledges that the “empirical evidence for this claim is weak.”

C-sections have been around for hundreds of years, but they used to be performed mainly on dead or dying mothers as a means for saving the baby. But oh, have times changed. Though controversy surrounds the procedure to date, rates of this type of surgery have risen. In fact, about one in three U.S. births is by cesarean.

“If women have the idea that bigger babies are healthier, and to a point they are, they may choose surgical delivery to have a bigger baby,” Trevathan noted. “The risks of this form of delivery in the absence of medical necessity are great for both mom and baby, especially when the child’s lifelong immune function is considered.”

Some research even suggest that an infant’s immune system might benefit from a vaginal delivery, as it picks up helpful bacteria via the mother’s birth canal.

So, if evolution has increased the gap between pelvic size and newborn size, wouldn’t it make sense that non-cesarean births continue to become more difficult; more painful?

“That’s what we predicted,” Mitteroecker began. But he says it’s “difficult to judge how much the rate of birth complications has really increased,” he said.