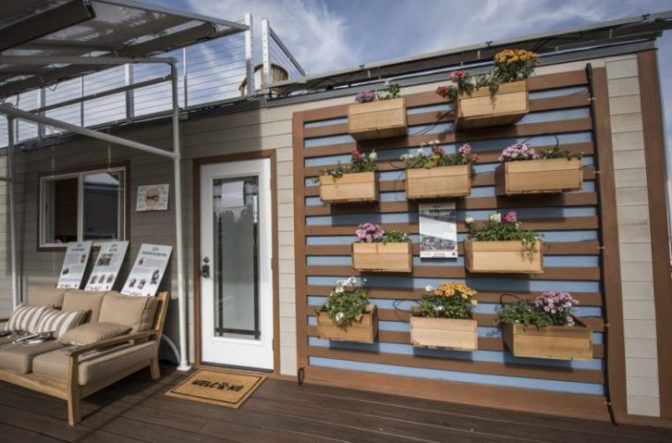 The tiny house movement seems to get bigger and bigger each year (pun intended), and now there’s even competitions for it!

California’s first tiny house competition took place recently, and showed off some genius ideas. Called the SMUD Tiny House Competition, the grand prize was a whopping $10,000, provided by partner sponsor Raley’s Family of Fine Stores along with other sponsors.

The competition was held the week of Oct. 10 at Cosumnes River College in Sacramento. First place was awarded to Santa Clarita University students, who created a 238 square foot structure boasting astonishing attributes from a technological and design standpoint.

Called rEvolve House, which refers to the tiny house’s capability of tracking the sun during the day to elevate solar gain, the prototypical home was designed in partnership with Operation Freedom Paws with the idea of providing low-cost housing to veterans training their own service dogs.

The self-sufficient tiny home is powered by eight 330 Watt Sunmodule solar panels, and stores its energy in saltwater batteries. The batteries happen to be the very first to be Cradle-to-Cradle certified. Furthermore, the Colossus solar tracking appliance boosts its absorption efficiency by 30 percent.

The tiny home, along with being totally off-grid, rests on wheels, and boasts a surprising amount of comfort. There’s a transforming Murphy bed in the bedroom that allows for expanding room during the day. The full-sized kitchen comes complete with a seating area and a fold-out table, and there’s even a wet bathroom that utilizes a dry-flush toilet for the purpose of eliminating black water.

“We are very proud of our team of students who put two years of dedication, time, and energy into building this home,” Godfrey Mungal, Dean of the School of Engineering at Santa Clara University, said.

“The Santa Clara team can conquer the world now,” announced Tim Hight, associate professor of mechanical engineering and the team’s faculty advisor. “They set a huge target for themselves and they exceeded their own expectations.”

The rEvolve House is a green machine, with small planters on the exterior, as well as a spiral staircase leading to a rooftop terrace. But perhaps the most impressive part is the house’s humanitarian intentions.

“I’m on cloud nine,” JJ Galvin, the student team lead on the project said. “It’s unreal that I’m blessed enough to be here and have this team and support. Half the reason I came to Santa Clara was to work on projects like this.”

“The tiny house provides the first step in the journey of empowering veterans to evolve their independence and is a safe haven for them to acclimate and begin training their dogs prior to returning to their respective homes,” explain the students in their design brief.

The competition, new in the Sacramento region, asked collegiate teams to design and build net-zero, tiny solar houses. The event was open to all colleges and universities in California, and served to spark interest in energy conservation, energy efficiency, green building, and solar technologies. Modeled after the U.S. Department of Energy’s Solar Decathlon, the competition’s tiny houses are actually less than half the usual square footage of a home built for the decathlon, plus they are also built on wheels. The altered implications allowed for a greater range of educational institutions to take part.

All of the tiny houses implemented smart appliances, green building materials and techniques, renewable energy technologies, and small living designs. The criteria for the competition was broken down into four categories: architecture, energy efficiency, home life, and communications.

Now that the competition is over, each team is permitted to decide what will happen with their tiny house. Santa Clara University, for instance, has chosen to donate its home to Operation Freedom PAWS. California State University is donating its house to Habitat for Humanity, and College of the Sequoias has sold its home to help pay for other school projects.