RIP Jacque Fresco — The Mind Died But the Idea Lives On 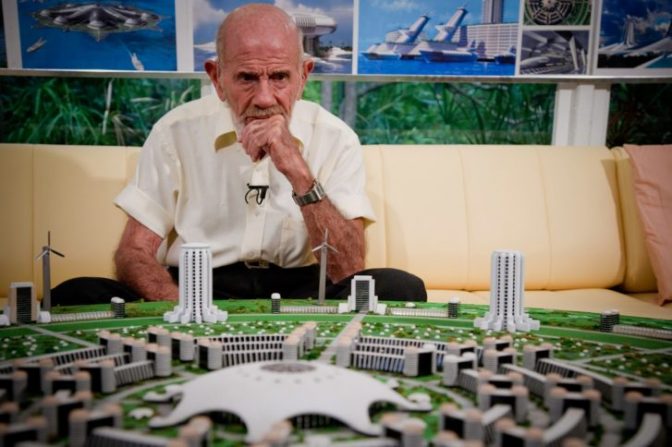 Written by Just Another Human Being

On May 18th 2017, the world lost one of this century’s greatest minds. At 101 years of age, Jacque Fresco died peacefully in his sleep from health complications of Parkinson’s Disease.

In normal Jacque Fresco fashion, his body is now being dissected and examined for science.

Jacque Fresco has inspired millions around the world he has changed my life profoundly. He took everything I knew and tossed it to the side, he shook me to the core.

His ideas and thoughts made me feel uncomfortable and frustrated. After the difficult journey of realizing much of what I knew was a lie bestowed upon me by a backwards society, I began to see and think differently about life.
Unlike the majority,  Jacque was tired of bandaging our societal wounds, realizing these issues needed addressing holistically. War, poverty, mental health and addictions seemed perpetrated by the monetary system we live in.

He understood that we first have to change our value system before we can see lasting positive change for ALL living creatures. His solution — a resourced based economy, where all the earth’s resources are the common heritage of it’s inhabitants.

The means of production is not through currency such as money, but real, tangible things — resources.

His views were ahead of his time and cast off by mainstream society. Put into boxes titled, ‘utopian’, ‘idealist’, and ‘crazy’ to name a few. This did not stop him.

To his last breath, Jacque had a sense of urgency and knew that if his work did not continue, the world would continue its own path to self destruction — a path of environmental destruction, social injustice, violence, nuclear proliferation, and destitution.

Until his passing he continued giving lectures worldwide and created models, illustrations, and blueprints for the betterment of our world. Jacque’s aim of bringing peace and sustainability to all continues to grow through his non-profit organization, The Venus Project.

I urge you all to look into Jacque’s work with an open mind, hoping you too will be inspired and use that energy to make our world a better place. All revolutions begin with small individual acts that expand outwards to society. A brilliant mind of our time has left us, but let this not stunt the evolution of his ideas.

Sincerely,
Just Another Human Being

For more information on Jacque Fresco’s work, check out:

I will leave you with some of my favorite quotes of Jacque Fresco:

‘Democracy is a con game, it is a word invented to outplay people, to make them accept a given institution. All institutions sing ‘we are free’. The minute you hear ‘freedom’ or ‘democracy’ – watch out, because in a truly free nation, no one has to tell you that you’re free.’

‘Scientists today are commercially rewarded. Chemists are working for the drug companies. There is no such thing as a scientist yet, otherwise they would be out here in the [Occupy] protest.

‘People say that the monetary system produces incentive this may be true in limited areas but it also produces greed, embezzlement, corruption, pollution, jealousy, anger, crime, war, poverty, tremendous scarcity, and unnecessary human suffering. You have to look at the entire picture.’

‘Jealousy is not natural. If I reach for my cat, the dog growls. Feed the dog food every time I hug my cat and after a while the dog would wag its tail every time I would hug my cat. If jealousy was instinctive this wouldn’t happen.’

‘We talk about civilization as though it’s a static state. There are no civilized people yet, it’s a process that’s constantly going on… As long as you have war, police, prisons, crime, you are in the early stages of civilization.’

‘At the beginning of World War II the U.S. had a mere 600 or so first-class fighting aircraft. We rapidly overcame this short supply by turning out more than 90,000 planes a year.

‘The question at the start of World War II was: Do we have enough funds to produce the required implements of war? The answer was No, we did not have enough money, nor did we have enough gold; but we did have more than enough resources.

‘It was the available resources that enabled the US to achieve the high production and efficiency required to win the war. Unfortunately this is only considered in times of war.’

‘I have no notions of a perfect society, I don’t know what that means. I know we can do much better than what we’ve got, I’m no utopian, I’m not a humanist that would like to see everybody living in warmth and harmony: I know that if we don’t live that way, we’ll kill each other and destroy the Earth.’

‘War, poverty, corruption, hunger, misery, human suffering will not change in a monetary system. That is, there will be very little significant change. It’s going to take the redesign of our culture and values.’

‘When I was about 13, one of my relatives stuck his hand into a metal fan while it was on. This led me to design a fan with rubber or fabric blades. I submitted the design to some companies, but they showed no interest. Shortly after that, the product came out on the market. This was my introduction to the market place.’

‘In my work I am not attempting to predict the future. I am only pointing out what is possible with the intelligent application and humane use of science and technology.’

‘In our society, we move people out of government. It’s all operated by machines, meaning – not the people, just the products: the farming, the agriculture, the production – it’s all machine-designed and programming.

‘But it does not program or design people. People are free to live whatever lifestyle they want to. If they hurt other people, they’re helped – they’re not put in prisons.’

‘I asked myself, ‘How are you going to change all these people, they have different values, different customs, different language, different interpretations?’

‘The majority of the people of the world today are unsane, not insane, unsane meaning having been exposed to methods of evaluation that have long rendered obsolete, our language in the future will change to a saner language where we have no argument in it, ‘can there be such a language?’ there is, when engineers talk to each other, it’s not subject to interpretation, they use math, they use descriptive systems, if I interpreted what another engineer said in the way I think he meant it: you couldn’t build bridges, dams, power transmission lines. The language has to have meaning.’

‘Instruction in academia did not emphasize what I thought of as essential points. I was interested in the broad range of interrelated connections within the physical sciences, but formal studies isolated each branch of science.”

I feel that I have advantages greater than Da Vinci’s such as access to more information, materials, and methods.’

In an interview with Larry King:

Do you believe in God?
“No, of course not”.
What do you believe?
“I believe if you want to live in a better world, you have to get off your ass and make it better”.’