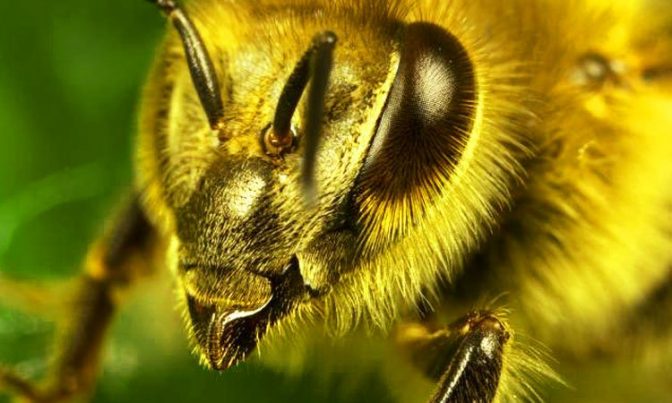 Honeybees pollinate almost a third of the food we consume, but they’ve been dying at alarming rates due to threats like habitat loss and disease, as well as colony collapse disorder (CCD), the phenomenon where worker bees abandon their hives, leaving behind only the queen bee and enough food and nurse bees to help take care of the immature bees and the queen. There is also increasing evidence of a direct link between neonicotinoids, which are the most common type of insecticides, and CCD.

And while honeybees have been dying off in many countries over the last decade, causing widespread concern over how much of the world’s food crops will get the pollination they require, different authoritative approaches have been implemented. The White House gave a task force a mere 180 days to create a plan to protect bees and other pollinators, for instance. The National Pollinator Health Strategy plans to:

But other scientists have taken different avenues for dealing with the crisis, using modern technology to replace living bees with robotic ones. Researchers at Harvard University introduced the first RoboBees back in 2013. Led by engineering professor Robert Wood, the team created bee-size robots that can lift off the ground and hover midair when connected to a power supply.

The details were reported in the journal Science. Harvard graduate student and mechanical engineer Kevin Ma, who co-authored the report, noted that the team is “on the eve of the next big development” and that the robot “can now carry more weight.”

Prior to this development, it had been impossible to put all the necessary things to make a robot fly into such a minuscule structure while still keeping it lightweight enough to actually stay off the ground, but the Harvard researchers believe that these RoboBees could, within a decade, artificially pollinate a field of crops.

The White House determined that the loss of bees and other species “requires immediate attention to ensure the sustainability of our food production systems, avoid additional economic impact on the agricultural sector, and protect the health of the environment.”

The RoboBees aren’t exactly a solution just yet, however, as they still need to be able to fly on their own and communicate with each other to perform tasks like a real honeybee hive is capable of doing.

“RoboBees will work best when employed as swarms of thousands of individuals, coordinating their actions without relying on a single leader,” explained Wood and colleagues in an article for Scientific American. “The hive must be resilient enough so that the group can complete its objectives even if many bees fail.”

And while Wood explained that CCD and its threat were part of the reason for producing the robotic bee, he says the devices aren’t actually supposed to replace natural pollinators indefinitely. This means, despite their efforts, the focus should still remain on how to save these essential creatures.

The RoboBees would serve as “stopgap measure while a solution to CCD is implemented,” the project’s website cautions.

Why Not Just Get Rid of Pesticides?

s it a little to late? It seems that we’ve known for years that pesticides are killing millions of bees, if not billions. More specifically, it’s neonicotinoid pesticides that have been targeted as the culprit, and the province of Ontario, Canada is doing something about it. Ontario’s government recently made the decision that neonicotinoid pesticide use will be reduced by 80 percent no later than 2017.

Neonicotinoid insecticides persist in very high levels in planter exhaust material produced during the planting of crops treated with these insecticides. This runs contrary to industry claims that the chemicals biodegrade and are not a threat, they lied. These pesticide components are found in soil, they are also found in fields where the chemicals are not even sprayed. Bees also actively transfer contaminated pollen from primarily pesticide treated corn crops and bring it back to their hives. Furthermore, bees transfer these pesticides to other plants and crops that are not treated with the chemicals, which goes to show just how persistent these chemicals truly are in the environment.

“The Ontario government has moved to limit the use of neonicotinoid pesticides amid  growing evidence that the substances are responsible for drastic reductions in bee populations in the province. The Ministry of Agriculture, Food and Rural Affairs laid out a three-point initiative Tuesday that it says will ensure “healthy ecosystems” and a “productive agricultural sector” while reversing the downward trend of pollinator numbers.” (source)

“The science is very clear. It is absolutely linked to the problems with bees, the death of bees, but also the sub-lethal effects on bees, such as disorientation, which leads to colony failure. The new information that is before us and very alarming is that the impact on the ecosystem is much greater and much broader. The bees are the canary in the coalmine.” (source)

A study out of Harvard University, published in the June edition of the Bulletin of Insectology puts the nail in the coffin, “neonicotinoids are killing bees at an exponential rate, they are the direct cause of the phenomenon labeled as colony collapse disorder (CCD).”  FYI, neonicotinoid’s are the world’s most widely used insecticides. (source)

A paper published in the journal Nature discusses how bees are twice as likely to die when exposed to pesticides; two-thirds of the bees are lost when exposed compared to a third when not exposed. The exposed bees are also half as successful in gathering food. (source)

Scientists from the US Department of Agriculture as well as the University of Maryland published a study that linked chemicals, including fungicides, to the large scale die-off of bees that has recently plagued the planet, you can read that study as well. (source)

It’s not just bees, it’s other insects (not to mention the effects on human health as well as the environment) like Monarch butterflies, you can read more about that here.

Alarming bee losses have also been recorded in various parts of the world where these pesticides are sprayed, they are dying by the hundreds of millions.

To learn more about this or to find more detailed articles on this subject, check out any of the related articles already available on CE by clicking HERE.

Thousands of Genetically Modified Insects Are Set For Release