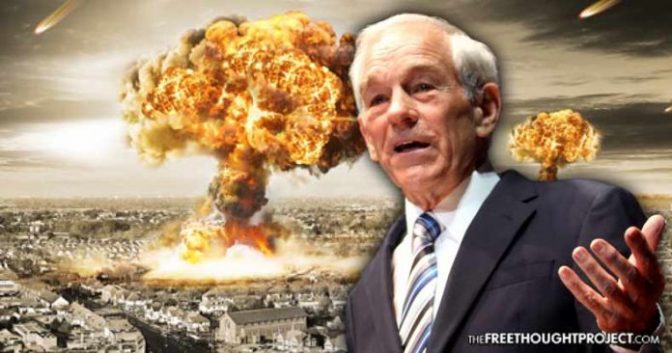 “Somebody’s going to use a false flag and someone is going to shoot down an airplane, just so this war gets started,” said the former Congressman.

Former Congressman and presidential candidate, Dr. Ron Paul is going on the offensive to wake Americans up to this run toward war by this administration fueled by deep state interests. During an interview this week, Ron Paul warned that the deep state could carry out a false flag and use it to lead America into the next major war.

“We are seeing now in regard to North Korea a replay of the type of campaign the deep state and the media used in 2001 through 2003 to stir up the American people to support the invasion of Iraq,” wrote Adam Dick for the Ron Paul Institute as he summed up Paul’s comments on the issue.

During the interview, Paul lambasted the Trump administration for saber-rattling at the North Koreans and trying to provoke them into a conflict.

After illustrating how senseless and dangerous this smack-talking match between Trump and Kim Jong Un has become, Paul explained how the US has no business over there and our mere presence endangers lives and costs billions.

Noting just how serious this push to conflict has become, Paul then described how at any moment, either a real or staged false flag event could be used to catapult the US into a catastrophic world war.

“The stage is set now, the North Koreans are threatening, ‘Well, we’re gonna shoot down an airplane,’” said Paul describing the scenario.

“Now that the stage is set, it’s progressing because of our involvement. Somebody’s going to use a false flag and someone is going to shoot down an airplane, just so this war gets started,” Paul said.

Paul, who noted that he was in high school during the first senseless conflict with Korea, then drew a parallel with how the US is doing the same thing they did to bring us into the Iraq war—lie to us over and over and over until we believe them.

“Just remember … the propagandists, the deep state, and the media convinced the American people that Saddam Hussein was a danger. They’re doing the same thing now with North Korea,” said Paul.

In response to this propaganda, Paul, who has served as chairman of the Ron Paul Institute for Peace and Prosperity since leaving the US House, says Americans “ought to wise up and just not buy into this,” as reported by Adam Dick.

As the majority of the population fights over people kneeling during the national anthem, Donald Trump has given in to the shadow government and has begun marching the US toward war. His methods so devious that he’s managed to pull the wool over the eyes of his support base and push for more war, higher taxes, and the continuation of Obamacare. All the while, people think he’s making America great again.

Trump has reneged on just about every promise he made to his supporters and, sadly, they seem to not care at all. Short of the myriad of symbolic executive orders, he made upon entering office, Trump is proving that he is intent on carrying out the exact same policy of his predecessors—up to and including putting the whole of America in harm’s way to bolster the bottom line of the military-industrial complex.

As Ron Paul said, “President Trump, who holds the lives of millions of Koreans and Americans in his hands, has taken to calling the North Korean dictator “rocket man on a suicide mission.” Why? To goad him into launching some sort of action to provoke an American response? Maybe the US president is not even going to wait for that. We remember from the Tonkin Gulf false flag that the provocation doesn’t even need to be real. We are in extremely dangerous territory and Congress for the most part either remains asleep or is cheering on the saber-rattling.”

As for how to stop this march toward war, Ron Paul has the solution.

Here’s how to solve the seven-decade old crisis: pull all US troops out of the Korean peninsula; end all military exercises on the North Korean border; encourage direct talks between the North and South and offer to host or observe them with an international delegation including the Russians and Chinese, which are after all Korea’s neighbors.

The schoolyard insults back and forth between Donald Trump and Kim Jong-Un are not funny. They are in fact an insult to all of the rest of us!