Sacred Geometry: What Is It and Why Should I Care? 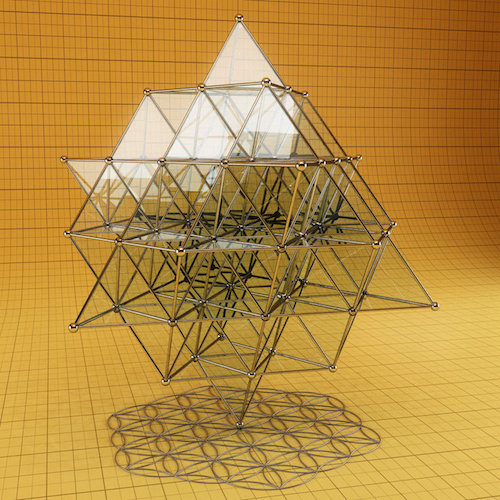 “The harmony of the world is made manifest in form and number, and the heart and soul and all the poetry of natural philosophy are embodied in the concept of mathematical beauty.”
-Sir D’Arcy Wentworth Thompson

Geometry isn’t just math. It’s where the math that you learned in school actually comes from. The origins of all math somehow has a relationship to geometry.

Phi and Fibonacci are two of the most basic concepts of sacred geometry. They are very similar, but not the same. Many of you may have learned about Fibonacci in school. Or at least the Fibonacci sequence. This is a sequence of numbers, in which the first number, when added to the second number, equals the third number (1,1,2,3,5,8 etc). This sequence manifests itself all throughout nature.

Phi, also known as the golden mean, is the number 1.61803399… It goes on forever. This number is very special, here’s why: In any mathematical pattern, you need at least 3 numbers to figure out the pattern. Look at the binary pattern for example. It starts like this : 1, 2, 4, 8, 16… each number is just the previous number doubled. In the mathematical pattern using phi, you only need 2 numbers. This isn’t easily explained with words…

The relationship between these two sequences is very special. It’s almost as if Phi is “gods’” way of creation, and Fibonacci is nature’s way. In all animals and people on this planet, the Phi ratio is present everywhere. It’s in frogs and fish, as well as butterflies and dragonflies.

It’s also present inside of you!

In nature, the ratio is a little different. It’s almost as if nature tries to create what “god” created, only it can’t. So, instead of using the phi ratio, it uses Fibonacci. When you take the numbers in the Fibonacci sequence and divide one of them by the previous, the resulting numbers will continuously strive closer and closer to Phi.

As you can see, the resulting numbers are never the Phi number exactly. One time it is a little bit higher than Phi, the next time a little bit lower. But as these numbers get larger and larger, the distance to Phi is reduced. In nature, you see Fibonacci everywhere.

These may look like Phi ratios, but they aren’t. The way you can tell is by looking at the very beginning of the pattern. The center of the nautilus shell. The pattern starts out rough, and gradually smoothes out as it gets farther out.

Early civilizations knew of the importance of Phi. I suppose that’s why they named it “The Golden Ratio”. They used it in building several of their monuments and statues as well.

I often wonder, “Why didn’t I learn about this in high school?” The ancient cultures obviously knew this very well and used it to the fullest. It is just another amazing part of nature and creation that has been suppressed by the government and the school systems to dumb down the youth of America. But wait, there’s more!

The Flower of Life

The flower of life is a basic geometric pattern that is made by overlapping circles in a specific mathematical way. This pattern of circles, believe it or not, is the pattern of creation!

I know, right? How is this the pattern of creation? Well, let me tell you… This pattern of overlapping circles holds a tremendous amount of information. Inside this pattern are several other patterns that have been used around the world in the distant past. But before we get into that, let’s start at the beginning. The beginning of your creation!

When you are first conceived inside the ovum, you start off as a single cell. Through mitotic cell division, you go from one cell, to two cells, to four etc. You continue to divide this way until eventually you begin to start to form the heart. (The amazing story of the formation of the heart is a story for another time!)

When you start to look closely at your early cell formation, you notice that it looks very much like the pattern of the flower of life, only in 3D. Still not convinced? It’s understandable to be skeptical at first. So was I.

Every religion has a creation story, but the best known is the story of Genesis from the Christian bible. God created the entire world in 6 days, and on the 7th day, he rested. How does this have anything to do with a silly pattern of overlapping circles? Check this out.

When drawing the flower of life, you start with a single circle (much like the way you start as a single cell). After you have your main circle is when the fun begins! The next step is to draw an identical circle exactly one radius away from the center of the original.

This first circle we draw atop the original can be seen as the “first day” of Genesis. In this new pattern, you find the vesica piscis, which is where we get the mathematical information about light (let there be light!).
Continuing in the same way, you begin to draw identical circles exactly one radius away from the center of the previous.

This is the Genesis pattern, also known as the “seed of life”. The pattern of creation! And look, it took us 6 days! (Now let’s take a rest…)

If you continue to add additional circles in the same way as above, you eventually get the original pattern of the flower of life. The seed of life is only one of the basic patterns that come out of the flower of life. Many of you may have heard of the “tree of life” which is a symbol used in the Hebrew Kabbalah.

Another shape revealed by the flower of life is known as the fruit of life.

This pattern of 13 circles was also a very special pattern to several ancient civilizations, including the ancient Egyptians. If you connect the center of these 13 circles, it makes a 3D cube.

It would be a shame for us to claim this as the “pattern of creation” based only on the biblical story of Genesis, mitotic cell division, and other ancient religious symbols, right? Now it’s time to jump back into the geometric pool again.

Metatron’s Cube and the Platonic Solids

If you ever took a geometry class in school, you surely heard of Plato. He revolutionized the world of geometry with his introduction of the 5 platonic solids.

These 5 shapes have very special characteristics: Each side is the same length, each face the same size, each interior angle is the same measurement, and when placed in a sphere as in the example above, each corner will intersect with the sphere perfectly. You may be thinking, “Ok, so what do these 5 shapes have to do with the flower of life?”

The answer isn’t exactly easy when you look at the original pattern of 23 overlapping circles. You have to take it one step further. First, you must extract the fruit of life pattern, and draw lines connecting the centers of each circle to each other. In doing so, you get this:

This pattern is known as Metatron’s Cube. And somewhere in this mess of lines are each of the 5 platonic solids. (Trust me, I’ve looked!)

Through studying the work of Plato, we have learned in modern times that he was really on to something when he discovered these 5 special shapes. On the periodic table, every element has a direct connection to one of these shapes. This is most easily seen when the element is in a crystalline state. An easy example of this is to look at water in the form of a snowflake.

This is just the tip of the iceberg (no pun intended!) when it comes to sacred geometry. There is so much more information in the flower of life alone that I don’t have the time to go into right now. But there’s also sacred geometry and ratios many other places. From the dimensions of the great pyramid, to the distances between celestial bodies- such as the sun and moon, and the moon and Earth.

I didn’t even mention crystals (which are amazing structures that are ALIVE and GROW without the use of reproductive organs or photosynthesis) which also have internal structures that are almost identical to the fruit of life, (much like the snowflakes above), or the ancient Babylonian teaching of circling the square, or squaring the circle. There is so much more to this thing called Sacred Geometry than meets the eye. There’s a reason they don’t teach you this stuff in school, and that very reason is why you should investigate it further.

If you want to learn more, I would recommend reading The Ancient Secret of the Flower of Life, by Drunvalo Melchezidek. (This book was the source of all the pictures used in this article. They are in no way my original examples). It comes complete with stories of our ancient past, and something else that I didn’t have time to get into called the MerKaBa, which is a 3 dimensional star tetrahedron that surrounds the human body known as a “light body”.

Wow. What an amazing subject! I hope you become as curious as I was and begin to explore for your own!

In la Kekech ala Kin
A Mayan greeting
“you are another me, and I am another you”