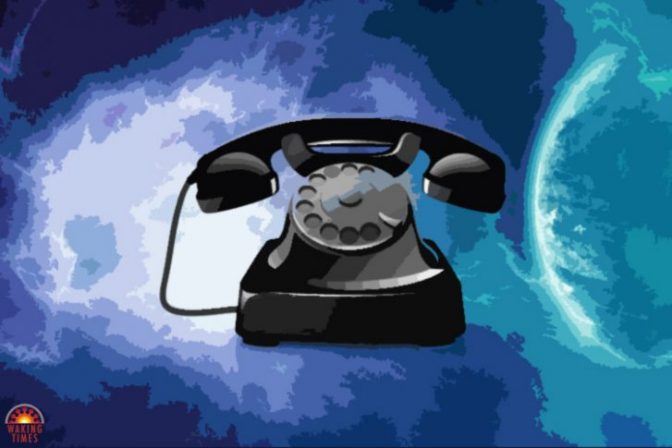 There is a rift between the world as we see it and the world as it really is. Science and spirit are our primary tools for closing this gap in our understanding, and at the edge of this rift has always been psychic phenomenon like telepathy, premonition and the familiar sixth sense.

Many people experience these phenomenon with regularity, yet they escape scientific explanation, even though a large and historically deep body of experiential and anecdotal evidence exists. This library of evidence prevents dismissal of the psychic as either a figment of the imagination or the existence of an archaic belief system that still has imprints on the mind. This evidence implores to investigate further rather than reject.

Some examples of psychic phenomenon are so common that they don’t even really stand out as having significance in our day-to-day to lives, as they are just seamlessly woven into reality. No one demands a scientific explanation. We’ve all experienced them before. The curious moment when a friend or loved one pops into your mind seconds before the phone rings, with them on the other line. You suddenly think of someone you haven’t seen in ages and a few minutes later that person texts you. These are the everyday tell-tale signs that the human psyche is always one step ahead of the human mind.

Unexplainable, perhaps, but why is it that mental telepathy seems to be so commonly connected communication? Is it the brain acting as a radio transmitter, sending and receiving information at immeasurable speeds, or is it something more akin to quantum entanglement?

To determine whether or not the telepathic or pre-cognitive experiences as these were occurring by chance or by some deliberate act of nature, author and biologist Dr. Rupert Sheldrake conducted an experiment which goes a long way in answering this question.

He set up an experiment which had a person receiving a phone call guess who was calling before answering. The subject knew the caller had to be one of four potential callers, giving the experiment a hit rate for chance of 25%, although in reality this phenomena occurs from a much broader base of callers.

Looking at the statistical result, the general sample indicated there was about 44% chance of correctly guessing the caller, a number which is much higher than what can be accounted for by mere chance. More interestingly, the percentage rose even higher when the pool of callers was narrowed down to people who had closer social or emotional bonds with the subjects, such as close friends or extended family members.

The human brain and radios both use the same form of electromagnetic radiation to communicate beyond their physical boundaries. This type of radiation is energy transmitted at the speed of light in waves which can vary in strength, or volume, and in wavelength, the length of the cycle of the wave measured against time. Radios use much higher frequencies of energy than the human brain does, yet the concept is the same.

“Radio waves, which include radio and other wireless transmission signals, as well as other natural signals in the same frequency, peak and trough at between 50 and 1000 megahertz—that’s between 50 million and one billion oscillations per second. The human brain also emits waves, like when a person focuses her attention or remembers something.  This activity fires thousands of neurons simultaneously at the same frequency generating a wave—but at a rate closer to 10 to 100 cycles per second.” [Source]

Electromagnetic radiation emitted by the billions of neurons within the human brain is strong enough, and organized enough to be picked up and interpreted in patterns by EEG technology, which uses sensors that touch the scalp and relay messages to a computer.

Much like the human eye can only see light within a certain range of the total range of all light, the human brain utilizes only a certain narrow range of electromagnetic energy out of the total possible spectrum of signals being carried in and around our environment. The work of Dr. Michael Persinger is aimed at proving that paranormal encounters are illusions created by the brain itself, a sort of temporary broadening of the ability to process electromagnetic energy. The science of this is fascinating, as technology is allowing us to influence the brain in subtle, deliberate ways which trigger specific chemical reactions that change our perception of reality. We now can literally trigger paranormal experiences in the science lab.

Every day on planet earth billions of phone calls, texts and emails are sent all over the globe, representing a dramatic increase in the amount of communication taking place between human beings.

Could it be that this increase is fueling a shift towards more accessible psychic experiences?

Is the precognitive phenomenon of communication related telepathy just an illusion, or can the brain can be dialed into an atypical frequency that allows it to pick up information that is not readily available to the five senses in our ordinary state of consciousness?

The trouble with quantifying these experiences is that it reduces their meaning and their significance to the realm of data and predictive science, often ignoring or devaluing the lasting effects that even short psychic or telepathic experiences can have on a person’s worldview and on their personal development. Paranormal experiences have the power to push an experiencer through to a different level of consciousness than before, which can totally alter their psychological landscape for the rest of their lives.

Psychology is unquantifiable, and the value of understanding our psychic abilities is also immeasurable. To many, however, psychic experiences, such as those that happen with the sixth sense, or those that can occur under the influence of psychedelic drugs, with certain meditation practices or even technologically induced, are all too often deemed insignificant in relation to the material experiences that bind us to our shared reality.

So what do you think telepathy of this sort is really about?

Buck Rogers is the earth-bound incarnation of that familiar part of our timeless cosmic selves, the rebel within. He is a surfer of ideals and meditates often on the promise of happiness in a world battered by the angry seas of human thoughtlessness. He is a staff writer for WakingTimes.com.

This article (Science Unravels the Mystery of Everyday Telepathy) was originally created and published by Waking Times and is published here under a Creative Commons license with attribution to Buck Rogers and WakingTimes.com. It may be re-posted freely with proper attribution, author bio, and this copyright statement.