Scientists Create Shape-Shifting, Cell-Sized Robot That Could Change the World 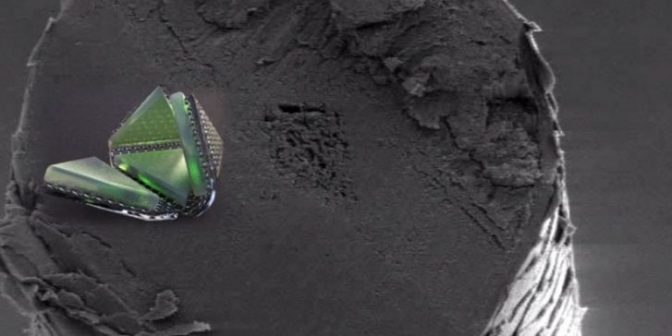 (ANTIMEDIA) — Scientists have taken another step in manipulating the microscopic world by creating a cell-sized robot that is capable of delivering electronic, photonic, and chemical payloads. The nanoparticle, which has been described as a kind of muscle or ‘exoskeleton,’ is capable of conducting electricity, sensing thermal changes in its external environment, and even altering its shape. Physicists say such molecular robots could dramatically change the world we live in.

Together with postdoctoral researcher Marc Miskin, Cornell physicists Paul McEuen and Itai Cohen designed the microscopic bots to travel inside the body and interact with its biological processes. Composed of graphene and glass, the micron-scale robot is a template for a biomorph, which bends as its two constituent materials react to chemical stimuli differently. These bends cause the robot to morph into varying shapes like cubes, tetrahedron, helices, and even bidirectional folding origami.

“You could put the computational power of the spaceship Voyager onto an object the size of a cell,” Cohen said in a news release. “Then, where do you go explore?”

Researchers created the cell-sized robot exoskeleton with a method called atomic layer deposition. This involved the layering of silicon dioxide and aluminum with graphene in a process of wet-transferring.

“If you want to build this electronics exoskeleton, you need it to be able to produce enough force to carry the electronics,” said Miskin. “Ours does that.”

The field of nanotechnology, commonly believed to have been invented by physicist Richard Feynman in 1959, is paving the way towards encoding massive amounts of information into cells and molecules. Some scientists believe nanotechnology will enable humans to use self-replicating microbots to clean up the environment and even destroy cancer cells.

While the Cornell team’s graphene-based biomorphs do not have any commercial applications at present, researchers expect it to contribute to the field of nanobots, which will be a $75.8 billion global industry by 2020.