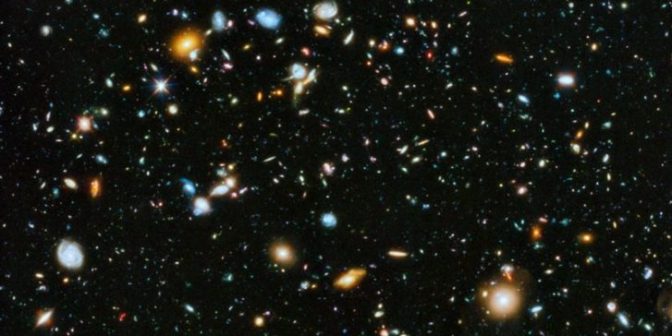 (ANTIMEDIA) — The origin of life on Earth is one of the great mysteries human civilization must unravel. It goes right to the heart of the most baffling cosmic conundrum — what is life, why does it form, and what is its role in a seemingly violent, random universe?

A new study by a team of scientists may render the mystery even more vexing, as recent tests have shown it is possible for the molecular ingredients for life to form in space. The experiment opens the door for theoretically considering that life on Earth originated within the vacuum of space itself. It also has exciting ramifications for how we look at asteroids and comets, including the ancient interstellar asteroid ‘Oumuamua, which was recently determined to have a carbon-rich coating.

Researchers from the University of Sherbrooke in Quebec, Canada, conducted the experiment using thin films of ice containing methane and/or oxygen that were subjected to low-energy electron (LEE) radiation in high-vacuum conditions. LEEs were used because they have been known to trigger chemical reactions.

Sure enough, the research team found direct and indirect evidence suggesting that life is able to form and flourish in the same conditions found in space. The new study, published in the Journal of Chemical Physics, found evidence for small organic molecules like acetic acid, formaldehyde, and methanol, which form the building blocks of life.

The finding is important because it goes a long way toward confirming that organic molecules don’t have to originate from another star system or planet but could actually form in space itself. This widens the scope of the panspermia theory, which holds that microbial life on Earth may have originated elsewhere in the galaxy — or another galaxy — and hitched a ride through deep space via meteorites or asteroids to arrive on our planet.

The incredibly bizarre interstellar asteroid named ‘Oumuamua, which was revealed to the public last month, can now be considered a potential incubator for life. According to researchers studying the object’s reflected light, ‘Oumuamua has a 16-inch layer of carbon-rich goo coating its exterior, which explains why the asteroid is not spewing water vapor and leaving a trail of detritus behind it.

News of ‘Oumuamua has conjured images from Arthur C. Clarke’s Rendezvous with Rama, which is about an anomalous object entering the solar system. The object, in Clarke’s novel, is first mistaken for an asteroid and then revealed to be an enormous artificial craft. Several nations dispatch astronauts and discover that Rama was created by a technologically advanced alien race that terraformed the interior of the asteroid into an artificial world. The origin and purpose of Rama remain a mystery.

While ‘Oumuamua is far more likely to have an interior of rock, ice, and dust than an artificial environment, the University of Sherbrooke researchers’ latest discovery suggests it is possible the asteroid’s exterior contains microbial life. Currently, scientists are scurrying to gather as much observational data from ‘Oumuamua as they can before it leaves the solar system.