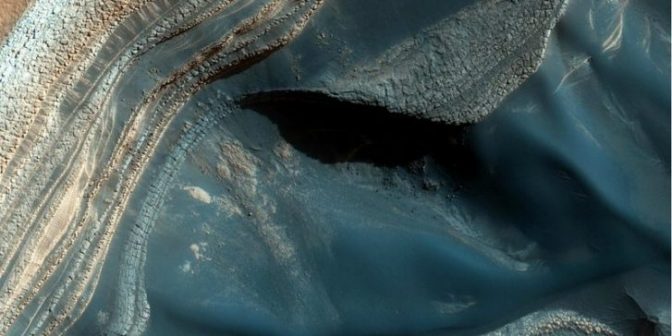 (ANTIMEDIA) — The fanciful notion of human beings living on Mars grew one step closer to becoming a reality this week, as newly published images taken by NASA’s Mars Reconnaissance Orbiter (MRO) show that thick deposits of clean water ice — more than 300 feet deep in some cases — are buried just below the Red Planet’s surface.

The images, part of a study published Thursday in the journal Science, reveal that erosion has formed steep cliffs at several locations along Mars’ equator, where temperatures are warmer. The layers of ice are exposed on the cliff slopes, allowing researchers to judge the deposits’ size and purity.

“It’s like having one of those ant farms where you can see through the glass on the side to learn about what’s usually hidden beneath the ground,” Shane Byrne, one of the study’s authors, told NBC News.

However, that water ice exists on Mars is no great revelation in itself. Scientists have long speculated as much, as National Geographic explained:

“In 2002, the NASA Odyssey mission scanned the planet from orbit and detected signs of shallow ground ice at high latitudes. In 2008, the NASA Phoenix mission dug up water ice at its landing site near the Martian north pole.

“And in late 2016, scientists using the Mars Reconnaissance Orbiter (MRO) found a buried ice sheet at Mars’s mid-latitudes that holds about as much water as Lake Superior.”

The truly exciting part of the discovery is that these relatively pure layers of ice are so close to the planet’s surface. In some instances, they are just a few feet down, which makes the almost limitless water very accessible to human beings.

“Astronauts could essentially just go there with a bucket and a shovel and get all the water they need,” said Byrne, who works out of the Lunar and Planetary Laboratory at the University of Arizona.

As to where the ice originated, Colin Dundas, a planetary geologist at the U.S. Geological Survey and lead author of the study, says it has been hypothesized that “snow could have fallen within the last several million years during periods when Mars’ axis was more tilted than it is now.”

In addition to the discovery further opening the door to the idea of humans having access to a steady supply of water on Mars, study authors say analyzing the sediment trapped within the ice layers can offer insights into the Red Planet’s climate record.

“We’ve learned a lot about the ancient history in other ways,” Dundas said. “This is preserving a record of what conditions have been like in relatively recent times — which is still quite interesting. It’s a different aspect of Mars science.”

There are, of course, issues to consider before rushing into celebration, as WIRED pointed out:

“The eight sites Dundas and his colleagues observed were all located at upper mid-latitudes, between 55 and 60 degrees north or south of the equator, where temperatures can drop extremely low. Most Mars missions, though, restrict their landing sites to within 30 degrees of the equator — as would future crewed missions to the planet’s surface, most likely.”

Speaking to WIRED, one NASA scientist put it another way. “If you wanna stay warm, it’s better to be in Hawaii than Alaska,” said Jet Propulsion Laboratory’s Richard Zurek, who was not involved in the research.

Still, study authors write that the discovery of such vast sheets of ice so close to Mars’ surface has given the scientific community a lot more to work with in unraveling the mysteries of the Red Planet:

“This ice is a critical target for science and exploration: it affects modern geomorphology, is expected to preserve a record of climate history, influences the planet’s habitability, and may be a potential resource for future exploration.”