Scientists: Mars’ Moon Will be Ripped Apart to Form Rings Around the Planet 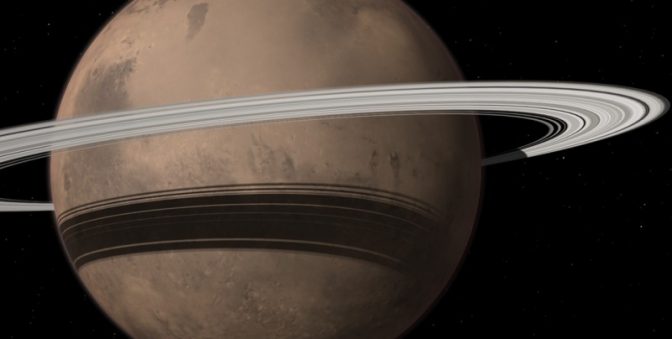 (Era of Wisdom) Mars — Scientists at the University of California, Berkeley published a paper in the journal Nature Geoscience alleging Mars is going to become the first rocky planet with rings.

The paper notes that Phobos, one of Mars’ moons, is inching closer to collision with Mars every year. Eventually they say, Phobos will get too close to the Martian atmosphere, and it will be ripped into a cloud of dust that will form rings around Mars.

Phobos is a particularly unstable moon. According to these scientists, the 10km-wide Stickney crater on Phobos is indicative of huge cracks running through the moon. They say the moon was almost destroyed by the impact that created the crater, and now it’s weak.

According to the Guardian–

“The models drawn up by Benjamin Black and Tushar Mittal show that Phobos is likely to survive its descent for a good while yet, but could start to break up in 20 to 40 million years’ time. But once Phobos starts to crumble, within six weeks it could produce a ring around Mars that holds much of the moon’s ten trillion tonnes of material. “In other words, ring formation will proceed very quickly,” the scientists write in the journal Nature Geoscience. Once formed, the Martian ring could last for a million to one hundred million years.”

In a past Era of Wisdom article, we noted that centaur planet Chariklo was found to have rings, and scientists believe Chiron may have rings too. Centaurs are mini planets similar to dwarf planets with orbits between Jupiter and Neptune.

“Chariklo was surprisingly found to have rings, when the small centaur planet made an occultation to a star. Now, scientists actually think fellow centaur Chiron may have rings too. That’s exceptionally strange, because no known dwarf planets in further out regions of our Solar System, such as the Kuiper Belt, have rings.”

The full study on Phobos can be read at this link.