See How This Mutilated Sea Turtle Received A 3D-Printed Jaw 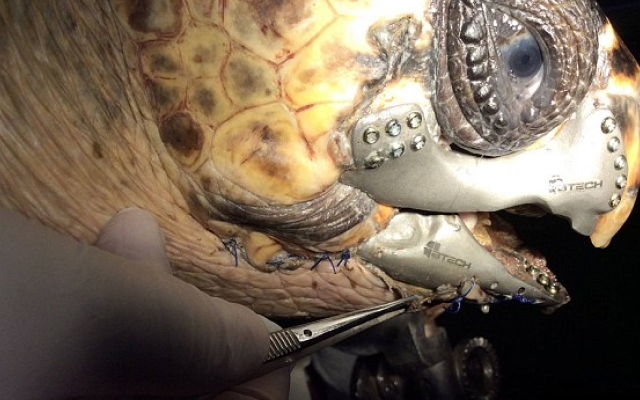 3D printing never ceases to amaze. The fact that we are now able to print prosthetic implants in the comfort of our own home should be enough to make any tech-snob gasp in amazement.

But it’s not just humans who are benefiting from this remarkable technology. Animals that have been injured in the wild are now able to receive much better medical intervention thanks to 3D printing.

Take AKUT3, for instance. During a casual swimming escapade in his natural marine habitat in Turkey, AKUT3 was tragically struck by a boat’s propeller.

The accident left him unable to eat on his own, leaving his chances of returning back to the wild looking very slim.

But a team from Pamukkale University’s Sea Turtle Research, Rescue and Rehabilitation Centre wanted to change AKUT3’s story, putting 3D printing to the test and creating a prosthetic jaw implant that would forever aid the loggerhead turtle.

The company used CT scans and computer software to create a 3D model of the turtle’s beak. This enabled them to design a prosthetic replacement, which was then 3D-printed in medical-grade titanium.

The surgery, which employed a team of surgeons and veterinarians, took two-and-a-half hours to successfully complete. So far, the turtle shows no sign of rejecting the implant, said Dr. Anas M. Anderson, a surgeon who helped perform the operation.

The team plans to release the turtle back into his ocean life once he is fully healed.

They hope that this pioneering surgery will pave the road to help other injured animals in need of implants.

Check out the team’s video detailing the incredible procedure (in Turkish) below!

Thanks to 3D printing, the future is limitless.