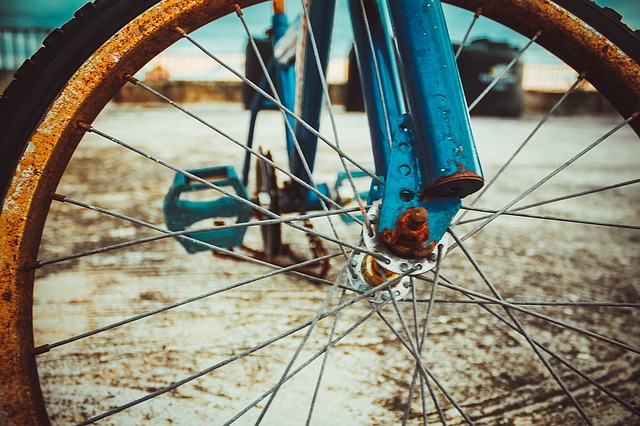 Ever since the arrival of fossil fuels and electricity,

human powered tools and machines have been viewed as an obsolete technology. This makes it easy to forget that there has been a great deal of progress in their design, largely improving their productivity.

The most efficient mechanism to harvest human energy appeared in the late 19th century: pedalling. Stationary pedal powered machines went through a boom at the turn of the 20th century, but the arrival of cheap electricity and fossil fuels abruptly stopped all further development.

Rotary motion has been the fundamental mechanism of most machines throughout human history. There have been several important innovations in applying human power to rotary motion, many of which already appeared in Antiquity: the bow (see the article on human powered drilling tools), the hand crank, the capstan and the treadwheel (these are described in more detail in the article on human powered cranes). Successively, each of these brought an improved mechanical advantage, being the factor by which the mechanism multiplied the human (or sometimes animal) input force into an higher output force. The treadwheel had another advantage over the hand crank: it replaced the use of the arm muscles by the use of the much stronger leg muscles, and it allowed the use of two limbs instead of one. The same effort could thus be sustained over a longer time – or a higher force could be exerted over the same time. To a lesser extent, the same advantage was valid for the capstan, where the legs did a large part of the work.

Another novelty appeared in the Middle Ages: the treadle. From the 10th century onwards, the Chinese used wooden treadles to obtain continuous motion for water pumps, textile machinery and wood saws. In the western world, treadles were mainly applied to spinning wheels and lathes (machine tools used for working metal and wood).

Treadles were inefficient compared to capstans and treadwheels (feet and legs must be accelerated and subsequently decelerated by the muscles) but they were more compact and a viable alternative when power requirements were low. Their main advantage over the hand crank was that they left both hands free to control the machine.

A boom of pedal powered machines

The cleverest innovation in applying human power to rotary motion only appeared in the 1870s. Some of us still use it as a means of transportation, but it is rarely applied to stationary machines anymore: pedal power. Initially, pedals and cranks were connected directly to the front (or sometimes rear) wheel. With the arrival of the ‘safety bicycle’ shortly afterwards, this direct power transmission was replaced by a chain drive and sprockets – still the basics of most present-day bicycles. Pedal power did not come out of the blue: some of the first bicycles were equipped with treadles, which could be considered the predecessor of the pedal.

Moreover, using the appropriate gear ratio (using chains and sprockets of different sizes) a mechanical advantage similar to that of a capstan or a treadwheel could be achieved (multiplying torque at the expense of speed or vice versa). This made pedal power suitable for a much larger variety of applications. From 1876 onwards, pedals and cranks were attached to tools like lathes, saws, grinders, shapers, tool sharpeners and to boring, drilling and cutting machines. These machines – which became very popular – were intended for small workshops and households without electricity or steam power. They were made with heavy cast-iron bodies that could be collapsed for shipping.

Pedals and cranks did not make treadles and hand cranks obsolete. On the contrary, these tools became more sophisticated (made of steel instead of wood, for example, or using gears inspired by bicycles) and became increasingly popular for low or brief  power applications. The historical importance of pedal powered machines can be easily overlooked by people who grew accustomed to fossil fuels and ubiquitous electricity. Therefore, it cannot be stressed enough how much of an improvement pedal power was in the light of thousands of years of human drudgery. Pedals and cranks make use of human power in a near-optimum way. The circular pedalling motion mainly activates the thigh muscles or quadriceps which are the largest and most powerful muscles in the human body. Furthermore, using the appropriate gearing, pedals and cranks make use of these muscles at an optimal speed: about 60 to 90 revolutions per minute. Research in the twentieth century has shown that muscles develop maximum power when they are contracting quickly against a small resistance.

Historically, the motions used to harvest human muscle power used inappropriate muscles moving against resistances which were too large at speeds which were too low. While human powered capstans and treadwheels were much more efficient, their use was limited because of their sheer size (and especially in the case of treadwheels, their high costs).

In the 1977 book Pedal Power in Work, Leisure and Transportation‘, David Wilson explains three ways in which the application of human muscle power could fall short of the optimum:

“First, the wrong muscles could be involved. We find time and time again that people were called upon to produce maximum power output, for instance in pumping or lifting water from a well or ditch, using only their arm and back muscles. Second, the speed of the muscle motion was usually far too low. People were required to heave and shove with all their might, gaining an occasional inch or two. A modern parallel would be to force bicyclists to pedal up the steepest hills in the highest gears, or to require oarsmen to row boats with very long oars having very short inboard handles. Third, the type of motion itself, even if carried out at the best speed using the leg muscles, could be nonoptimum in a rather abstruse way.” Good examples of the misuse of human muscle power throughout history were large human powered rowing boats, as well as most farm work. In the third edition of ‘Bicycling Science‘, the same David Wilson writes:

“The muscle actions used by these unfortunate oarsmen were typical of those considered appropriate in the ancient world. The hand, arm and back muscles were used the most, while the largest muscles in the body – those in the legs – were used merely to provide props or reaction forces. (They didn’t have the sliding seat of today’s competitive rowers). The motion was generally one of straining mightily against a slowly yielding resistance. With five men on the inboard end of a sweep, the one at the extreme end would have a more rapid motion than the one nearest to the pivot, but even the end man would probably be working at well below his optimum speed. Most farm work and forestry fell into the same general category. Hoeing, digging, sawing, chopping, pitchforking, and shoveling all used predominantly the arm and back muscles with little useful output from the leg muscles. In many cases, the muscles had to strain against stiff resistances.” Pedal power is a product of the industrial revolution

All these actions – and many more – could have been made much more efficient using pedals and cranks, making the life of people in Antiquity and medieval times much easier. However, no matter how simple it seems to us today, pedal power could not have appeared earlier in history. Pedals and cranks are products of the industrial revolution, made possible by the combination of cheap steel (itself a product of fossil fuels) and mass production techniques, resulting in strong yet compact sprockets, chains, ball bearings and other metal parts.

Prior to that time, the available materials were not strong enough to take the large force that was acted upon them. This is even truer for stationary pedal power than for road bicycles, because the strain on parts is considerably larger. Experiments in the 1970s designing pedals, cranks and bearings for stationary pedal power units using pre-industrial materials like wood failed. And while the frame of a pedal powered machine can be made of wood or bamboo, steel is a better option – contrary to road bicycles, a lightweight frame is not an advantage for a stationary machine. And yet, this is what we are heading to. In spite of the many advantages of pedals and cranks, the heydays of pedal power were over fast – shortly after the arrival of the combustion engine and the electric motor. Even though pedal powered machines were designed to operate for 100 years or more, most were scrapped for metal during World War One & Two. The Barnes Company, one of the most famous manufacturers, began turning away from foot powered tools in the 1920s and stopped producing them altogether in 1937.

The revival of pedal powered machines

Several individuals and organisations experimented with a new generation of pedal powered machines. Although their efforts did not result in commercially available machines, a great deal of progress was made. The applications of pedal power were extended to include almost every possible machine. Moreover, several inventors designed and build universal pedal power units, which could be used to drive a wide range of tools and machines (see part 3: “Pedal powered farms and factories: the forgotten future of the stationary bicycle”). However, the present interest in stationary pedal power differs considerably from all earlier efforts: it is largely aimed at generating electricity, which is not an efficient way to harness pedal power. Furthermore, the lessons learned during the late 1800s and during the 1970s seem to have been forgotten, resulting in far from optimal machines that do not harvest the full potential of pedal power and – worse – have a doubtful ecological advantage (see part 2: “Bike powered electricity generators are not sustainable”).

Sources (in order of importance)