Snowden Blasts The NSA Over Global Malware Attack, Says They Could Have Easily Prevented It 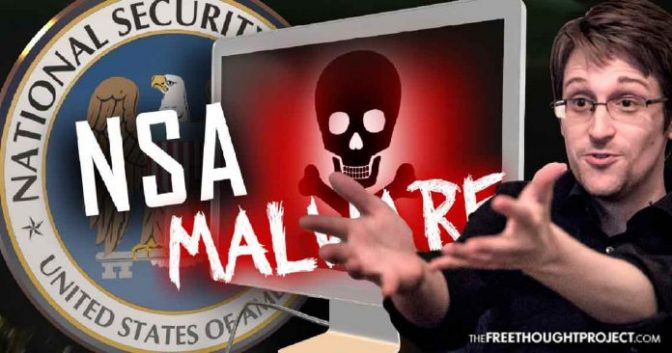 Just one day after U.S. President Donald Trump signed an executive order designed to improve the country’s national security against cyber security threats, nearly 100 countries, including the United States, were hit with a powerful Ransomware cyber-attack. An Attack, that former National Security Advisor contractor Edward Snowden is blaming on the NSA.

It was the one of largest known cyber-attacks in the history of the world and demanded frozen computers all across the globe buy bitcoin and pay in bitcoin to have their computers released.

The attack, carried out on Friday, affected and infected computer systems all across the globe, hitting the UK’s National Health Service the worst, according to some reports.

It even affected the server which hosts the Free Thought Project’s website. We experienced outages of over an hour before reverting back to our backup server in another part of the country.

Hours after the attack, carried out by unknown assailants, Snowden said it all could have been prevented.

In a series of tweets, Snowden attacked his former employer, pinning the burden of blame squarely on the backs of the NSA. Demonstrating the serious nature of the attacks, the whistleblower emphasized lives were on the line in the latest cyber attack.

The tools used in this hack were released online last month and belonged to the NSA.

Snowden, seeing the grave danger posed by the NSA’s spying and irresponsible nature, tweeted, “Whoa: @NSAGov decision to build attack tools targeting US software now threatens the lives of hospital patients,” indicating it was a leaked NSA cyberwar tool, created by the NSA which attacked the UK’s hospital system.

Pinning the blame on the NSA, he then tweeted, “Despite warnings, @NSAGov built dangerous attack tools that could target Western software. Today we see the cost:”

Graham Cluley, a computer security expert, agrees with Snowden, saying, “The US intelligence agency found a security hole in Microsoft software and rather than doing the decent thing and contacting Microsoft they kept it to themselves and exploited it for the purposes of spying. Then they themselves got hacked. And it was at that point Microsoft thought, ‘Jesus we need to patch against this thing’.”

Still acting as the patriot he claims to be, Snowden then called on Congress to call the NSA to the carpet and demand they acknowledge, address, and shore up vulnerabilities in other systems. He said in a tweet, “In light of today’s attack, Congress needs to be asking @NSAgov if it knows of any other vulnerabilities in software used in our hospitals.”

Not mincing words, the whistleblower — who some have called a traitor — tweeted, “If @NSAGov had privately disclosed the flaw used to attack hospitals when they *found* it, not when they lost it, this may not have happened.”

The blame, according to Snowden, lies within the NSA and could have been prevented. He elaborated in his follow-up tweet. The former NSA contractor said the government agency should have approached the hospital systems privately and revealed the Microsoft Windows vulnerability years ago, instead of letting the tool fall into the wrong hands and jeopardize lives.

He tweeted, “This is a special case. Had @NSAGov disclosed the vuln[erability] when they discovered it, hospitals would have had years — not months — to prepare.”

While it’s true that Microsoft is no longer providing updates and patches to its Windows XP platform, Snowden implied the security agency had a fiduciary responsibility to shore up any and all known vulnerabilities within XP. He tweeted, “If NSA builds a weapon to attack Windows XP—which Microsoft refuses to patches—and it falls into enemy hands, should NSA write a patch?”

Some might say Snowden’s last suggestion makes a lot of sense. Microsoft could have continued support for its aging platform, but when it didn’t, the NSA could have stepped in and provided such a security patch. Or, at the very least, informed people of the flaw.

Once again, Snowden’s words appear to haunt his former employer. In the ground shaking documentary, Citizenfour (2014), Snowden went on camera to tell the world just how powerful the NSA’s systems were, and to warn all Americans and world citizens alike of the dangers of cyber-warfare.

Only now is the world beginning to see, arguably, just how true his predictions would become. The switch has been flipped and the world is at war. The only problem is, no one knows precisely who is pulling the switches. But according to Snowden, the NSA knows how to fix it.