Sovereign Exercise: Your Understanding of Fiction vs. Reality 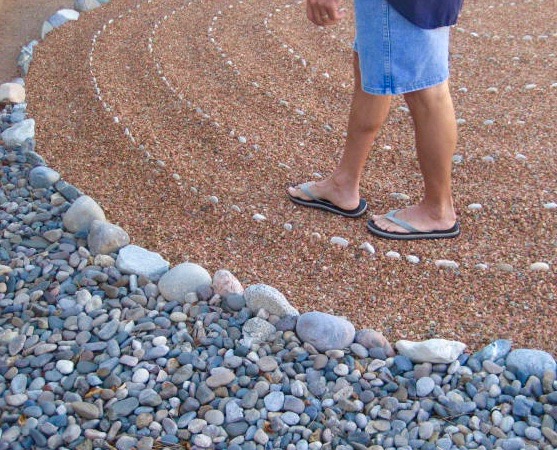 It is crucial to the sovereign exercise of inherent natural rights that one has a fundamental and visual understanding of the line between fiction and reality.

For the purposes of this understanding, reality refers to that which has substance in this third dimensional (3D) plane of existence; and fiction refers to anything that is a product of the mind of wo/man.

Generally, one may consider land and people to be real, with pretty much everything else being fictional.  There are various levels of fiction.

Taking land as an example: The land itself (which law considers to include everything above and below it) is real.  There is then a bundle of rights relating to that land: fiction.  There is also a ‘certificate of title’ relating to the land/bundle of rights — more fiction.  And, there is a registry at which ‘certificates of title’ are usually recorded and the entries therein: both fictions.  There may also be any number of other fictional titles and interests in a landed estate depending upon the degree to which the estate has been carved by operation of law.

The same fiction applies to people.  In this instance, the ‘certificate of title’ is called a birth certificate.

It is the voluntary attachment by a wo/man of real land, or him/herself, to the fictional certificate of title, which gives a fictional government jurisdiction over real land and real people.

Seeing clearly the distinction between fiction and reality is paramount to successfully navigating through life as a sovereign being.

The following is a general (loose) guide of the line between fiction & reality: 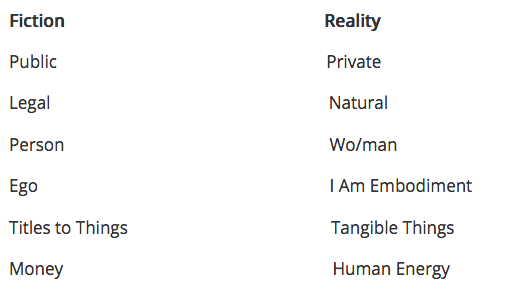 governments, corporations and other institutions do not actually exist

All governments, corporations and other institutions do not actually exist anywhere, but in the collective minds of people, which is fiction.  In reality, they do not actually exist!  Their existence is given the effect of life through the belief of people, and they are given power by the willingness of those people to act on their behalf.

For a fictional government to enforce its rules and regulations upon real wo/men, that belief must remain intact.  However, many years of blind voluntary compliance have allowed governments to develop extremely complex webs-of-fiction to make it harder for wo/men to recognize how they have been volunteering, so that even when they decide not to continue voluntarily comply, they remain unwitting subjects of its powers.

The exact procedures for how governments achieve this position varies from country…to country.  Please refer online to birth registration for further details.

By definition a legal fiction is:

An assumption that something is true even though it may be untrue, made esp. in judicial reasoning to alter how a legal rule operates; specifically, a device by which a legal rule or institution is diverted from its original purpose to accomplish indirectly some other object.  – Blacks Law Dictionary, Eighth Edition.

Legal fiction is the mask that progress must wear to pass the faithful but blear-eyed watchers of our ancient legal treasures [unalienable natural rights of wo/man]. But though legal fictions are useful in thus mitigating or absorbing the shock of innovation, they work havoc in the form of intellectual confusion.  – Morris R. Cohen, Law and the Social Order 126 (1933).

Learn more at ITNJ.org, website of the International Tribunal for Natural Justice; and through related articles in, The Sovereign Voice, a complimentary digital magazine from Humanitad Press and The Committee to Support the ITNJ.