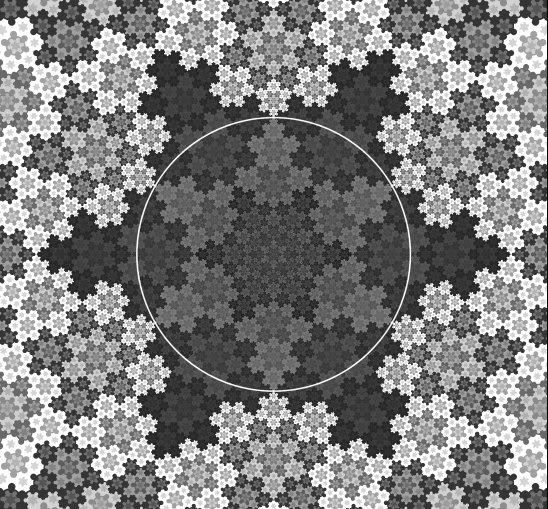 Geometry is an integral part of our lives. We study it in school in its theoretical form. After that, we may consider it in patterns we see, in the proportions of buildings, and the styling of jewelry. But outside of a classroom in high school, you may not have given geometry much thought. And Sacred Geometry? Most people have never heard of it. If that includes you, get ready for a fascinating topic that’s older and more intuitive than most people realize.

Since we’ve existed, humans have looked for patterns in

nature. We often see it in the plant world, and early cultures used the geometry of plants to help divine their medicinal and spiritual qualities. The ten seeds in an apple or pear reveal themselves as two parallel five-pointed stars when the fruit is cut across its core. The wild rose has five petals. Honeybees make combs, which are composed of perfect hexagons. The leaves of trees present highly complex patterns.

The world is full of naturally occurring geometry. Humans have been learning from this natural geometry throughout our existence and our understanding of it has evolved alongside civilization. From the beginning of recorded history, humans have understood patterns and geometry as sacred. We still understand geometry this way, though it is often a subconscious knowledge or intuitive understanding for us.

Artists have always used sacred geometry to describe the spiritual world. The simplest and physically most stable of the geometric shapes is the triangle. The triangle is that point where one dimension, the line, gives way to two dimensions, the plane. The pyramids of ancient Egypt were based on the angles of sunbeams breaking through clouds. The triangle and its three dimensional form, the pyramid, illustrated for ancient Egyptians the permanence of the afterlife, and the constancy of the sun.

Later, during the Renaissance, the triangle was used as a compositional pattern, with the head of Christ or the Virgin as the apex, and the rest of the body forming the base of the triangle. Similarly, the circle represents continuity and eternity; the square represents solidity, protection, and earthly existence. This is a rich area for study, and you can find many examples of the symbolism of shapes in the world around you.

The mandala is usually associated with Eastern religions, primarily Hinduism, and Buddhism, although many religions understand and use their power.

A mandala is a circular design, which radiates from a center, like the rays of the sun. The designs are often developed as prayers for a particular spiritual outcome. They contain religious symbols, figures of saints or Bodhisattvas, astrological aspects, and much other information that is meant to influence physical reality from the spiritual plane.

Mandalas are also used as a teaching tool to visually place different concepts in relation to each other. They can be temporary, as the sand mandalas, which Buddhist monks make. Or they can be permanent paintings, preserved and protected by the faithful. During the process of making the design, the monks maintain a meditative state, because the very act of creating a mandala is sacred.

You may have seen the ancient drawings constructed by pre-Columbians in South America. There is a giant hummingbird that can only be seen from the air. There is also a monkey, and several other drawings, simply made of arranged rocks and earth. They have existed for thousands of years, before humans had the ability to view the earth from aircraft.

How did the artists make these images? What significance did they have to the culture? Who was their intended audience? One can only think the ancients made these drawings for the gods. They are beautiful things to see, with their straight lines, and geometric purity, balance, and proportion.

Sacred Geometry in the Middle East

Sacred Geometry has maintained its importance in the Middle East.

Early in Muslim history, the Koran forbade realistic images of people and animals, fearing a return to what they saw as the paganism of past religions. However, artists began to use abstract, geometric patterns to beautify the houses of worship, and to represent the divine pattern of the cosmos. This is why mosques have glorious geometric patterns inside and out. This is why rugs from the Middle East are so beautiful, and instill a sense of peace in the room where they are placed. They are the modern heirs of ancient Sacred Geometry.

Incorporating Sacred Geometry into Your Life

The important thing is to respect your own spiritual outlook. Explore how patterns and geometry have influenced your growth and development. Search for the Sacred Geometry within your own tradition and the traditions of others. This is a very rich area for study, and one, which has the potential to bridge gaps of understanding between different peoples. Look at your own environment for clues to how Sacred Geometry works in your own life. It is a beautiful way to experience the Divine.