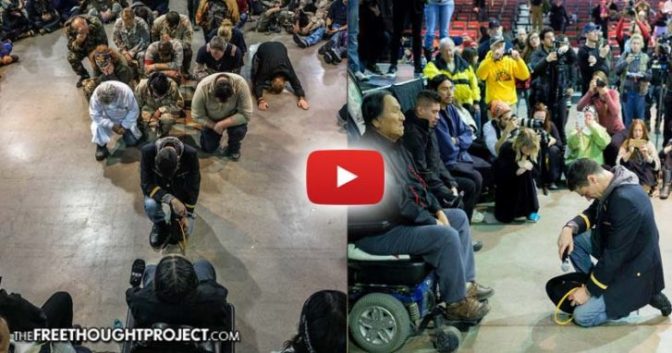 Standing Rock, ND – In an amazing display of humanity and reconciliation, U.S. military veterans that came to Standing Rock as part of “Vets for Standing Rock” movement, led by Wes Clark Jr., stunned tribal members when they gathered and took a knee, and asked for forgiveness for the genocide and war crimes committed by the United States military against Native American tribes.

While the U.S. government has never officially apologized for the genocide it committed upon tribal nations, these courageous veterans accepted responsibility for the actions and asked the tribe for forgiveness.

“We came here to be the conscience of the nation. And within that conscience we must first confess our sins to you because many of us, me particularly, are from the units that have hurt you over the many years. We came, we fought you, we took your land, we signed treaties that we broke, we stole minerals from your sacred hills, we blasted the faces of our presidents onto your sacred mountain.

Then we took still more land, then we took your children and then tried to take your language and tried to eliminate your language that God gave you and that the Creator gave you. We didn’t respect you, we polluted your earth, we’ve hurt you in so many ways, but we’ve come to say that we are sorry, we are at your service and we beg for your forgiveness.”

Leksi Leonard Crow Dog on behalf of the tribes in attendance accepted the apology and in turn asked for forgiveness for any hurt that might have been caused from the defeat of the U.S. 7th Cavalry by the Great Sioux Nation on June 25, 1876.

The last thing he said to the veterans was, “… and today we forgive and ask for world peace.”

All the veterans replied in a single unified voice, “WORLD PEACE!”

Additionally, musical artist Tina Malia also posted about the highly emotional moment — noting that there were no dry eyes in the room

Acts of truth telling and reconciliation are paramount to heal the centuries-long divide between Native Americans and the state that oppressed them. These gestures of peace, love, and forgiveness are the start to healing the brutality of the past. Although the U.S. government has never been willing to officially acknowledge the devastation

Although the U.S. government has never been willing to officially acknowledge the devastation perpetrated upon the Native tribes, these brave veterans, acting as “the conscience of the nation” have taken huge steps towards healing centuries of trauma and victimization.

Please share this amazing story of reconciliation and truth-telling!