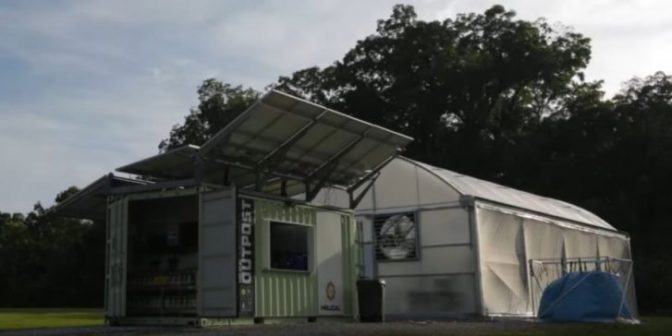 If you have ever dreamed about breaking away from society and starting your own settlement, or simply preparing for the worst, the Helical Outpost is your new best friend.

With zero carbon footprint and an abundance of features, one outpost can sustain life for about 50 people.

Never before has independent, off-the-grid living seemed so easy. With 3,000 – 6,000 square feet, or the size of a large shipping container, you can now have satellite internet, 2,000 gallons of purified water every day, solar power, crops grown hydroponically, and whatever other idea you can come up with using this amazing invention.

With the new Helical Outpost you can turn murky, brown water into drinkable water, or water to be used to feed your crops. The catch here is that you will have capture your own water. Some ideas for this could be using rain water, or water from lakes and rivers.

The Helical Outpost’s water purification system filters and cleans waters throughout four different stages: carbon, sediment, reverse osmosis, and UV. It is so efficient that it can clean up to 2,000 gallons of water per day.

One feature that really stands out is the internet connectivity of the Helical Outpost. Harnessed using satellite technology, it can provide internet access for up to 9 square miles, and 8 unique devices. This means that you can take a Helical Outpost out to the middle of nowhere in the Amazon Jungle, for example, and still have reliable internet.

Using hydroponic technology, the Helical Outpost is considerably fast at growing crops. It is so efficient that is can produce 10 times that of a 3-acre farm with only 6,000 square feet. For example, it is capable of growing around 2,300 plant units a week at 3 times the speed of traditional growing, using 80% less water.

The solar power panels generate up to 11kWh of power per day and is capable of storing up to 50 kWh. The U.S. Energy Information Administration said that the average electrical consumption of a residential home in 2015 for Americans was 10,812 kWh, which means that the Helical Outpost is already capable of competing with the typical daily usage of the average family.

What is the Best Place to Live Off-the-Grid?

With tightening regulations, , living off-the-grid is becoming harder to do every year. The state of Nevada has taken this one step further, and recently imposed a 40% solar power tax.

That being said, the best place to live off-the-grid is probably wherever you can stay out of sight. While there are many places which have relaxed off-grid policies, there also seems to be an influx of regulations to make this lifestyle harder.