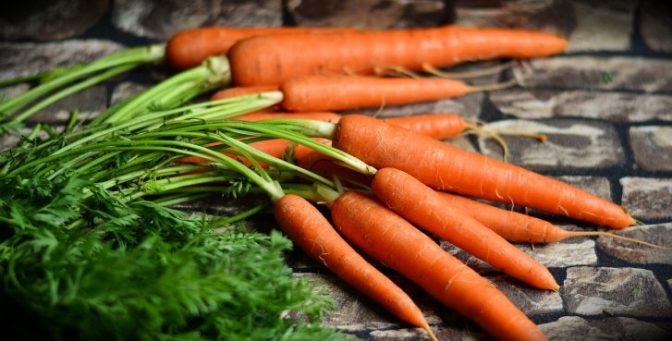 (Naturalhealth365) Over 95,000 people in the United States currently have stomach cancer – the third leading cause of cancer deaths. Rising rates of this deadly disease are driving the search for methods of prevention and treatment that are both safe and effective. Thankfully, many cancer solutions are easier (and far more pleasant) than you can imagine.

For example, conventional wisdom has held that carrots can help maintain sharp eyesight – a belief that has been verified by modern science. But, now it appears that carrots offer another important health benefit. Current research shows that this wonderful root vegetable may also hold the key to preventing stomach cancer – demonstrated by its truly extraordinary disease-fighting properties.

How to lower your stomach cancer risk – naturally

In a scientific review published in the Journal of Gastric Cancer, the authors evaluated 81 studies from around the globe – and combined the results of five to conclude that carrot consumption decreased stomach cancer risk by an average of 26 percent. (can you imagine the news reports – if this was a drug?!)

For example, the largest study involved 120,852 participants eating only 25 grams – about a fifth of a cup – of chopped fresh carrots, per day. Other studies featured amounts as small as three carrots per week.

The most impressive results came from a Lithuanian study, in which roughly 1,100 participants ate between one and six carrots a week. The result was a dramatic 47 percent decrease in the occurrence of stomach cancer. Again, if these results were from a pharmaceutical drug – it would be reported on every mainstream media outlet.

In addition, researchers found that eating carrots reduced the risk of a particular type of stomach cancer – gastric cardia cancer, which affects the top of the stomach – by a substantial 38 percent. The researchers noted a clear link between diet and stomach cancer, reporting that diets high in red and processed meats, salt and alcohol increase the risk.

On the other hand, consuming green tea, fresh fruits and vegetables has been shown to be protective against stomach cancer.

(Significantly, the researchers noted that carrot consumption was more effective in preventing stomach cancer in individuals who had a family history of stomach cancer – evidence that people at risk for stomach cancer may be able to prevent it with healthy lifestyle and dietary choices).

By the way, evidence is emerging that carrots can help protect against other cancers, as well.

Prostate cancer, the third leading cause of cancer death in adult male Americans, currently affects over 161,000 men in the United States. In one encouraging meta-analysis published in the European Journal of Nutrition, researchers found that eating carrots reduced risk of prostate cancer by 18 percent.

The scientists were even able to calculate the dose/benefit ratio for carrots and cancer prevention: for every 10 grams per day of carrot consumption, the risk of prostate cancer was reduced by 5 percent.

The implications are stunning!  Theoretically – the researchers said – a single serving of carrots a day could slash prostate cancer risk by 64 percent.

Why are carrots so effective at stopping cancer cell growth?

While research has shown that carrots can protect against cancer, scientists are only now discovering their various anticancer mechanisms and constituents. You see, carrots are extremely high in beneficial beta- and alpha-carotene – natural antioxidant plant pigments that help to stop the formation of harmful free radicals.

In addition, carrots are rich in zeaxanthin and lutein – a pair of important antioxidant phytonutrients – along with caffeic acid, ferulic acid and coumaric acid. They are also a great source of insoluble dietary fiber, which has cancer-preventing properties of its own.

At a mere 94 calories a cup, carrots contain four times the recommended daily value of vitamin A – essential for normal vision – and 21 percent of the RDA of vitamin K, needed for blood clotting and bone health. They are also a good source of the B-vitamin folate.

How carrots can effectively protect our DNA

The most potent anticancer weapons found in carrots may be a pair of plant compounds known as falcarinol and falcarindol. These “natural pesticides” exist in carrot plants in order to fight off diseases such as fungal rot.

(Although falcarinol is toxic in massive amounts, scientists say you would have to eat 881 pounds of carrots, at one time, in order to ingest a lethal dose, so: no worries).

But, research has shown that falcarinol performs another important function as well. The compound promotes the repair of cell DNA, thereby reducing cancer risk.

In an animal study conducted at Newcastle University, a team of English and Danish researchers found that rats given ordinary orange carrots were one-third less likely to develop tumors than rats that had not received the vegetable.

The study, helmed by Dr. Kirsten Brandt, was published in the Journal of Agricultural and Food Chemistry.

Dr. Brandt, who grows her own organic carrots and says she eats “more carrots than most,” advises eating one small carrot a day, along with other fresh vegetables and fruits.

Although much of the research has focused on chopped raw carrots, carrot juice has also shown potential in preventing cancer.

In one study, researchers found that carrot juice extracts caused apoptosis – or self-destruction – of human leukemia cells. In another study, women who consumed 8 ounces a day of carrot juice for three months experienced a lower risk of the return of breast cancer.

According to Stanford Health Care, a single cup of carrot juice contains amounts of nutrients and phytochemicals equivalent to 5 cups of chopped carrots. (However, carrot juice does contain less fiber and more sugar than fresh raw carrots, and natural health experts note that it shouldn’t replace fresh, organic fruits and vegetables in a daily diet)

For maximum benefit, you can combine carrot juice with apple juice – or spice up a carrot smoothie with piquant flavors such as cinnamon and ginger.

It turns out that ordinary, everyday garden varieties of organically-grown carrots pack a powerful punch – when it comes to cancer prevention. Of course, research into the anticancer properties of carrots is ongoing – and just may yield even more encouraging and intriguing results in the near future.