Stuff They Don’t Want You to Know: Orgone Energy 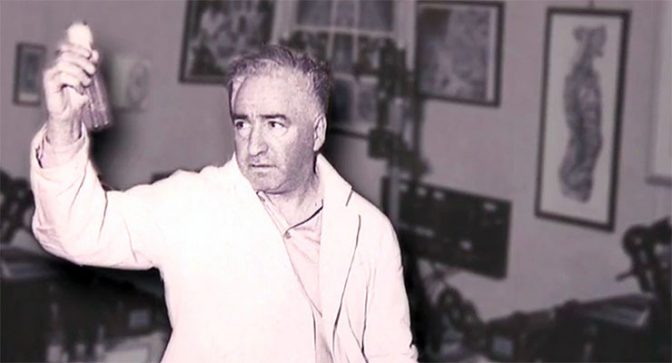 Wilhelm Reich was a little-known Austrian psychoanalyst that proposed a rather interesting theory on our universal life force. “Orgone energy” as he called it, originally proposed in the 1930’s, was believed to be a massless omnipresent substance (similar to luminiferous aether), but more closely associated with living energy than with inert matter. Reich believed this substance could “coalesce to create organization on all scales, from the smallest microscopic units—called “bions” in orgone theory—to macroscopic structures like organisms, clouds, or even galaxies.”

The term “orgone” was derived from “orgasm” and “organism”, which he believed to be essentially the “God” force. In 1940 he started building orgone accumulators, devices that his patients sat inside to harness the reputed health benefits, resulting in newspaper stories about “sex boxes that cured cancer.”

It was Reich’s opinion that the root of many diseases stemmed from a deficit (or constriction) of bodily orgone, aka: orgasm energy. This controversial theory was a point of contention in the press, and he received extreme amounts of backlash, resulting in a federal injuction from the U.S. Food and Drug Administration (FDA), which barred the interstate distribution of orgone-related materials, on the grounds that Reich and his associates were making false and misleading claims.

The FDA’s injuction stemmed from a belief that they were dealing with a “fraud of the first magnitude.” Sadly, Reich was charged with contempt in 1956 for having violated the injunction, and sentenced to two years’ imprisonment. That summer more than six tons of his publications were burned by order of the court, and he died in prison of heart failure just over a year later, days before he was due to apply for parole.

Some believe Reich to be a Tesla of sorts, an unsung hero wrongfully persecuted for a lack of proper understanding – while others believe his work to be a type of pseudo-science. Whatever the case may be, his story is an interesting one that is worth exploring.

The videos below provide a deeper look at Orgone Energy, its implications and Reich’s research. Watch, and be sure to share your thoughts and opinions on this fascinating theory.