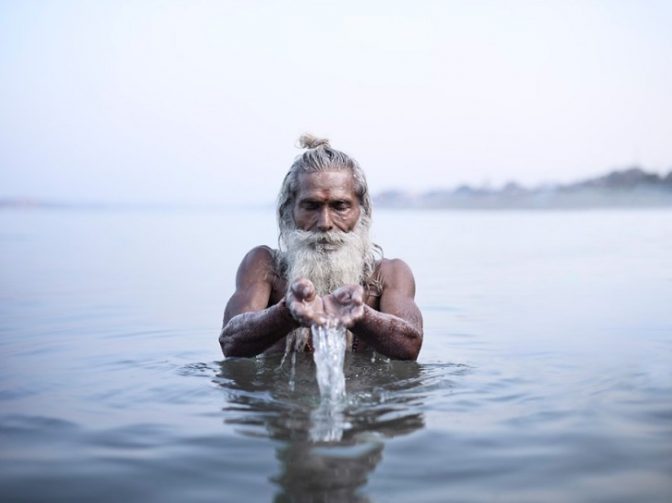 Brooklyn-based photographer, Joey L, has traveled the world searching for mystics, and those who have dedicated their lives to spiritual liberation.
His series, Holy Men, features the people he has encountered along his journey, and the photo series below focuses on the sadhus (holy men), who live in Varanasi India.

A large portion of the portraits focus on aghori, a sect known for engaging in post-mortem rituals such as covering themselves in human ashes, meditating on corpses or crafting jewelry from human bones.

According to Joey L., “The Aghori have a profound connection with the dead. Death is not a fearsome concept, but a passing from the world of illusion.”

Aghori sadhus cover themselves with human ash, which is the last rite of the material body.

When he was young, Lal Baba’s [man on the right] parents arranged a marriage for him. Uncertain about his future, he ran away from home in Bihar Siwan and took up the lifelong task of becoming a sadhu.

Magesh left a well paid job as an IT computer consultant to pursue to path of Aghora. After years of practice, he finds no temptation to return to his old life.

Lal Baba has dreadlocks (jatas) several meters long, which have been growing for over 40 years. To sadhus, dreadlocks are a sign of renunciation and a life dedicated to spirituality.

The Aghori have a profound connection with the dead. Death is not a fearsome concept, but a passing from the world of illusion.

Learn more in the video below…