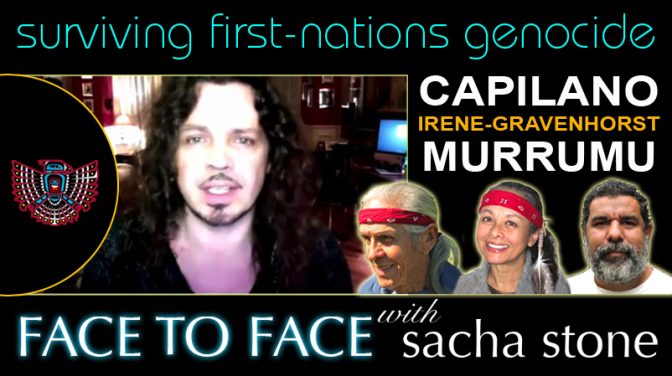 This weeks ‘live’ Face to Face show with Sacha Stone shines a light on first-nations genocide survivors to those wrestling their sovereignty from corporation governments.

Joining Sacha for this episode is Irene Gravenhorst Chief Justice of the Sovereign Squamish Government. She has successfully self litigated all her personal court matters and ‘abandoned’ all STATE CANADA government identification, leaving the Jesuit Freemason controlled tax and usury system as a sovereign, not a tax-slave!

Joining Sacha and Irene is Sovereign Traditional Leader Capilano, a historic survivor of indigenous genocide and now gatekeeper for the West of the Rockies protecting a portion of the Pacific coastline of the Sovereign Squamish Government (SSG) lands. Since 2007, he abandoned all de facto corporate government STATE CANADA identification to become a true sovereign example for his people, living on Mother Earth.

Sacha’s third guest is Murrumu Walubara Yidindji who renounced the Corporation known as ‘Australia’ and lives solely by tribal law. He walked away from his job, his possessions, his bank savings and a superannuation account built up over two decades. Giving up his citizenship, his passport and Medicare card he sent his driver’s licence back to the chief minister of the Australian Capital Territory, and now drives under Yidinji tribal law as a Sovereign ‘natural man’.