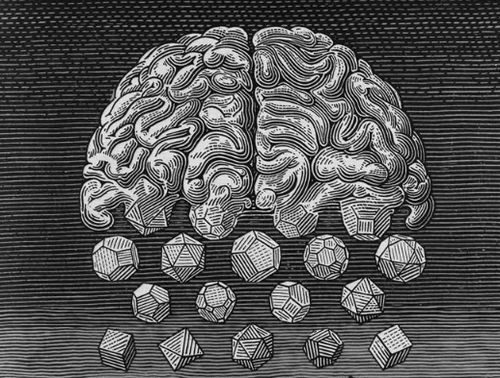 Synchronicity has become a household word. It’s a perceptual filter that you can put on, like goggles, to change the way you see the world. A coincidence occasionally manifests as something beyond chance; a meaningful and mysterious collection of incidents. Textbook examples include getting a phone call from someone who you were just thinking of, or alternatively, learning a new word and then hearing it three times that same day.

To the skeptic, so-called synchronistic events are the result of chaos, chance, and probability. It’s a game of statistics and therefore fundamentally meaningless. At best, the sync game is meaningful only to those who play it. At worst, a belief in synchronicity has been viewed as a pathological disease of perception which attributes meaning where there is none, perhaps because of an inflated sense of self-importance.

This should come as no surprise. Reducing profound emotional experiences to something bland and statistical is often the modus operandi of a scientific community. The scientific reality tunnel that views synchronicity as meaningless also views sex, love and psychedelics as biochemical processes. Most scientists adopt a moral stance to avoid appearing sociopathic, but the logical conclusion of their reductive stance, when taken to an extreme, would regard murder and rape in terms of Newtonian physics and ethical behavior as the consequence of socially constructed habit patterns.

Arguments against synchronistic perception are usually due to a lack of imagination. In terms of the history of intellectual development, it has come as a reaction to animistic spiritual beliefs held by our ancestors. It’s easy to forget that even today, many people do not enjoy freedom from a belief in witchcraft. They are stuck in a superstitious worldview. To these people, scientific reduction could be viewed as a liberating rather than limiting influence.

Most Western minds are firmly planted in the capitalist-materialist headspace. The risk of spirit possession is not high, and where such things occur, they are processed through the psychiatric and pharmaceutical industries until the patient is brought back to stasis. Drugged up and bored to death by behavioral modification, the psychotic and schizophrenic individual is successfully normalized and reintroduced to the workforce. Alternatively, the person is labeled mentally ill and remains in a psychic penitentiary indefinitely.

Between the oldschool fear of demonic possession and the newschool fear of “going crazy”, most people keep a distance from any worldview that might disrupt their mental fortress. The term synchronicity was coined by Carl Jung as a way to facilitate transformational psychic healing without the eradication of these perceptual anomalies. He believed that through dream analysis and active imagination, a person could integrate erratic forces within the subconscious and develop a relationship to them. Perhaps Jung was a bit crazy himself.

Sync-lite: A casual relationship to synchronicity acknowledging that the experience exists without indulging or pursuing it. Perhaps there is some underlying fear, but the general attitude is that sync is a harmless, not-very-interesting way of relating to events.

Intermediate Sync: A recurring experience of synchronicities on a daily basis. Typically this package involves some degree of enjoyment and active recognition. Maybe the person has a tendency to discuss syncs with friends and writes the events down in a journal.

The most intellectually sane perspective, in my opinion, is agnosticism. It is also the most pragmatic and allows the individual to do whatever they want with the experience. From the magical perspective, synchronicity is a reflection of our mind made manifest in the real world. The central teaching of sync is that the causal plane of physics exists in tandem with a second aspect of reality. That is to say, Life shape-shifts constantly to mirror our underlying beliefs, attitudes, and aspirations.

A fluid hyperspace that draws sentient beings towards one another is easily grasped through the examples of swarming bees, flocks of birds, and schools of fish. Rupert Sheldrake called this the morphogenetic field. A collective mind is postulated in order to understand how a large collection of biological creatures remain physically independent but unconsciously interdependent and unified in their movements.

Science fiction author Philip K Dick took synchronicity one step further and decided that even inanimate objects, like the label of a soda bottle, can present itself at just the right moment and from just the right angle to trigger a profound psychological event. I agree with him.

I have personally experienced a full spectrum of emotional responses to synchronicity, ranging from terror to bliss. The best conceptual framework I have found for relating to sync is through the metaphor of music. A non-musician’s relationship to music is passive; they wait to hear something that moves them. In contrast, a musician actively works to compose, arrange, and perform their music.

Synchronicity amounts to two or more data points that evoke a response in the viewer. Is this different from the effect of musical harmony? Replace “data points” with “musical notes” and imagine that the entire world is a playground of living information, each with its own resonant frequency, from which you can freely draw inspiration and create your own synchronistic narrative. This is in fact what we are doing all the time; creating our experience of life on a moment-by-moment basis through the stories we tell ourselves. But there is a weird and freaky dreamlike element to this process; the more acceptance and lucidity we have regarding unusual coincidences, the more frequently they occur and the more profound they become.

All perception exists in a balance of harmony and discord. By applying the principles of music composition to the intentional creation of lengthy ongoing synchronistic narratives, we become composers of our life journey and the entire universe becomes an orchestra. Sooner or later you will discover that the orchestra has a will of its own.