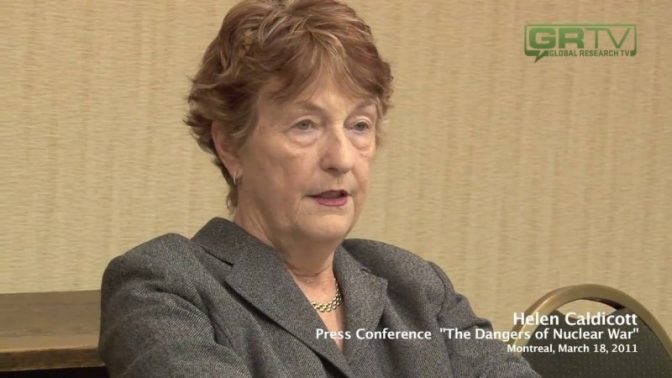 (Editor’s Note: This information is not intended to spread fear, although it will likely do so.  What that fear truly represents is awareness of a life altering truth, that we need to come together and act on behalf of our Mother Earth.)

The single most articulate and passionate advocate of citizen action to remedy the nuclear and environmental crises, Dr Helen Caldicott, has devoted the last forty two years to an international campaign to educate the public about the medical hazards of the nuclear age and the necessary changes in human behaviour  needed to stop environmental destruction.

Born in Melbourne, Australia in 1938, Dr. Caldicott received her medical degree from the University of Adelaide Medical School in 1961. She founded the Cystic Fibrosis Clinic at the Adelaide Children’s Hospital in 1975 and subsequently was an instructor in pediatrics at Harvard Medical School and on the staff of the Children’s Hospital Medical Center, Boston, Mass., until 1980 when she resigned to work full time on the prevention of nuclear war.

In 1971, Dr Caldicott played a major role in Australia’s opposition to French atmospheric nuclear testing in the Pacific; in 1975 she worked with the Australian trade unions to educate their members about the medical dangers of the nuclear fuel cycle, with particular reference to uranium mining.

Dr Caldicott has received many prizes and awards for her work, including the Lannan Foundation’s 2003 Prize for Cultural Freedom and twenty one  honorary doctoral degrees. She was personally nominated for the Nobel Peace Prize by Linus Pauling – himself a Nobel Laureate. The Smithsonian has named Dr Caldicott as one of the most influential women of the 20th Century. She has written for numerous publications and has authored seven books. It’s undeniable, Caldicott knows what she’s talking about with regards to the nuclear crisis at hand.

The video is from 2011, and it showcases Caldicott’s dire warning about the Fukushima  disaster. Her speech presents the crisis in clear light, giving no sugar-coating to the current rug-swept topic.

It’s time for us to stop denying our environmental and social responsibility. We cannot coin Fukushima information as “fear mongering” any longer. The message needs to get out to as many people as possible so that we can come together with a solution that, at the very least, slows any further damage from occurring.

Remember that we have the power to mitigate this situation. The first step to any great change is mass awareness.