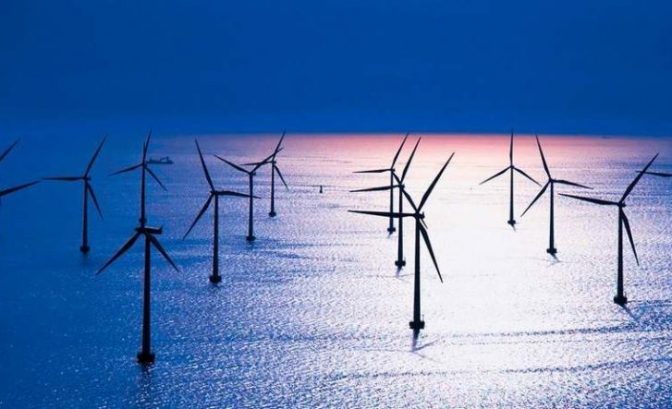 Prior to this week, all of the wind power generated in the U.S. was done so on land. Wind farms exist throughout the U.S., providing clean energy to combat fossil fuel dependence. But now, for the very first time in America, the ocean breeze is creating clean, renewable power offshore. The electricity will supply the small community of Block Island off the coast of Rhode Island.

Though news for Rhode Island’s Block Island Wind farm has sparked celebration, it may end up being the only one of its kind in the U.S., as the incoming presidential administration prefers coal and oil industry ventures.

But renewable energy is crucial to avoiding the catastrophic effects climate change stands to have on the world. Wind is free, for one thing, and harnessing it does not require fossil fuels. Wind turbines also take up less space than most power stations, and they can be set up in various remote locations, like offshore, as well as mountains and deserts. And wind energy resources throughout the country remain largely untapped.

The country’s first offshore wind farm was developed by a company called Deepwater Wind with support from the state’s political authorities. Block Island is a vacation destination that has a few year-round residents, who had been relying on diesel fuel to generate power.

“This is a historic milestone for reducing our nation’s dependence on fossil fuels, and I couldn’t be more thrilled that it’s happening here in the Ocean State,” said Rhode Island Senator Sheldon Whitehouse, co-founder of the Senate Climate Action Task Force said.

Deepwater Wind’s five-turbine 30-megawatt wind energy project has been in the works for more than a year. Now a reality, the farm is said to produce enough electricity for the three-mile island to use, as well as provide excess to Rhode Island’s energy needs at large.

Built by a division of General Electric, the wind farm is capable of powering 17,000 homes. And while small, it marks the first successful offshore wind development in the U.S., and provides hope that future offshore wind projects along the coast will unfold. The wind farm, which cost $300 million to build, also represents a noteworthy reduction in carbon dioxide emissions of about 40,000 tonnes per year.

The project will provide Deepwater Wind a federal tax credit. First-year rates for Rhode Island customers of National Grid, the utility company laying one of the cables to the wind farm, may be higher than what they currently pay, however.

Offshore wind farms are popular in Europe, where thousands of wind turbines have been placed along the coast. And just last year, 3,000 additional megawatts of wind power were added, which is about 100 times the amount of power generated by the Block Island Wind Farm. But in the U.S., offshore wind farms have struggled to succeed due to prohibitive costs, resident complaints — many argue that wind turbines destroy the natural beauty of the coast — and complicated regulations.

Deepwater Wind officials believe the Block Island Wind Farm will stimulate interest in and approval of the industry, resulting in more projects popping up along the East Coast.

“We’re more confident than ever that this is just the start of a new U.S. renewable energy industry that will put thousands of Americans to work and power communities up and down the East Coast for decades to come,” said Deepwater Wind CEO Jeffrey Grybowski.