The Taurid Meteor Shower Is Peaking: Watch For Fireballs! 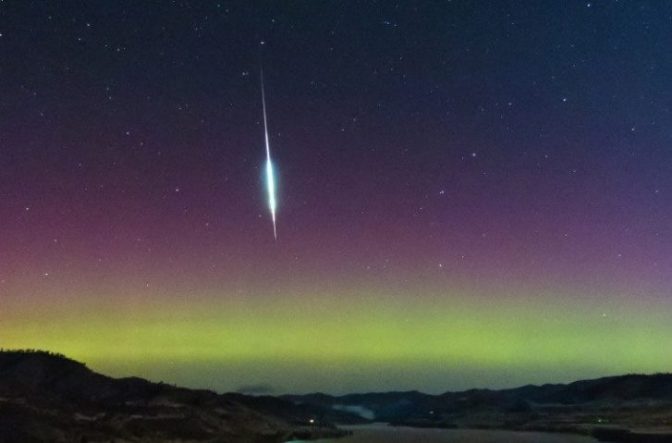 The South Taurid meteor shower has been the talk of the sky for a month now, with photos of meteors already being captured during this lengthy shower. Not all meteor showers garner the same enthusiasm, however, since many of us prefer the ones with the most excitement, like the Perseid meteor shower, which presented us with 200 meteors over an hour back in August.

There have been many dates discussed as the peak date of the South Taurids, and one of those happens to be November 4. So, if you’re ready for a show that doesn’t involve plopping yourself in front of a TV this Friday night, you’ll want to get yourself outside and take a look up. November 5 is also predicted to feature an above average rate of South Taurid meteors.

“In general, the Taurids are very bright,” explains NASA meteor expert Bill Cooke. “So there may only be five per hour, but they are bright. That’s their claim to fame.”

Should tonight and tomorrow pan out to be peak nights, you will likely see an average number of around 5 taurids increase to about 7. As for the significance of meteor showers, the American Meteor Society says, “The Taurids (both branches) are rich in fireballs and are often responsible for increased number of fireball reports from September through November.”

Look for the meteors to be in full swing just after midnight, when you may have the chance to see up to 10 per hour. According to Bruce McClure for EarthSky.org, the Moon seems to be cooperating this weekend by not reflecting moonlight through the sky, which would ruin the chances of skywatchers seeing anything.

“The Moon is now in a waxing crescent phase. Setting in the early evening, that means no moonlight to ruin the prime time viewing hours, centred on about 12:30am local time,” he explains.“We’re guaranteed to have deliciously dark skies for the South Taurids tonight and tomorrow, to highlight any Taurid fireball that might come whizzing by.”

Every year around this time, Earth passes through the Taurids, and are associated with the comet Encke. This comet and the Taurids are said to be the remains of a much bigger comet that has been falling apart over the past 20,000 to 30,000 years. The break-up may account for why there are so many Encke-like pieces that have been detected in our inner solar system.

The entire Taurid complex consists of numerous substreams, and has both comet Encke and various Near-Earth Objects (NEOs) moving inside it. The complex is even believed to be the biggest stream of material within the inner solar system. And it’s not small. “One astronomer has even postulated that it was a huge fragment of Comet Encke’s parent that produced a 10 megaton explosion over Siberia back in 1908,” explains NASA.

If you’re intrigued, and don’t want to miss the event, don’t worry, since it takes Earth several weeks to pass through the Taurid complex. And while the Taurids may be minimal, they move through the sky fairly slowly, around 28 km per second (17 mps) to be exact. They’re also easier to view since they contain many big pieces.