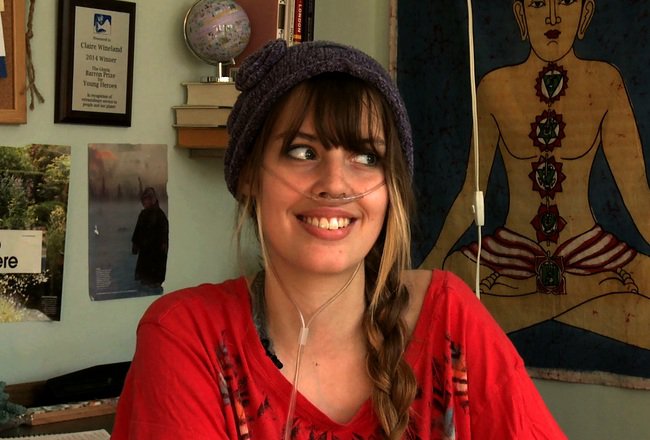 Claire Wineland has been inspiring people for quite some time now, but only recently did I come across a video of hers, and found myself completely captivated.

People don’t like to talk about death. It provokes fear of the unknown, and too many unanswerable questions as a result. What does it feel like to die? Will it hurt? How will I die? What will happen to me after I die?

The subject matter has been given a dark connotation, and so, simply put, people just choose not to go there. But not everyone has that luxury. Some people know they are going to die, and so, they live their lives a bit differently, not just physically, but also mentally and emotionally.

Claire is a 19-year-old from Venice Beach, California, who was born with cystic fibrosis, a genetic disease that causes excess mucous secretions and collection, most notably in the lungs. The disease has led Claire to undergo dozens of surgeries, one of which resulted in her becoming septic, which then caused lung failure back in 2010. She had to be put on an oscillator vent as a result, entering a medically induced coma for more than two weeks. I watched one of her videos on what it’s like to be in a coma, and that alone shook me to my core. She told the story both in the form of a vlog as well as through animation, giving a lighthearted yet informative explanation so that people can see the experience in a way they may never have had the opportunity to before.

“Cystic fibrosis is terminal, meaning it ends in death. And it is also progressive, meaning that as you get older, it gets worse,” Claire explained in the initial video I watched.

As someone who suffers from general anxiety disorder, I’ve learned that one of the most empowering things I can do is talk to people who have had similar experiences, or read stories about them. It helps me feel like I’m not alone, and to better understand what I’m going through. When I watched Claire’s videos, I could only imagine how her humour, intelligence, and positive yet matter-of-fact outlook affected others with CF, as well as their loved ones.

Of what it’s like to have the disease, she said:

Someone explained it me a while ago, imagine climbing a mountain and there is a giant like snowball hurling your way, you have to get up the mountain fast before it hits you, right. So you’re climbing of this mountain, but every single, you know, let’s say few miles, you get a giant weight put on your foot. And so as you’re getting higher, it’s also getting harder and harder to climb, but you have to climb even faster because you have to get to the top before that giant snowball comes wacks you off the cliff. That’s pretty much what having CF is like.

Claire’s nonprofit, Claire’s Place Foundation, which Claire founded when she was just 13 years old, gives emotional and financial support to children and families affected by cystic fibrosis. Her work has led to her being honoured by The Los Angeles Business Journal‘s Nonprofit & Corporate Citizenship Awards, and she received the Gloria Barron Prize for Young Heroes, both in 2014.

Her website, The Clairity Project, is a space for her to open up about her life and provide videos, photos, and writing related to CF and her experiences through it. Her YouTube channel has garnered a lot of attention as well. She discusses everything from why being in the hospital doesn’t always suck to how she’s preparing for death. She has even shared her story in person, travelling across the country to speak at venues like TEDx Malibu and PTTOW!

I was specifically intrigued by Claire’s effortless and inviting way of taking the taboo out of discussing death.

I could die in a year or they could come out with a cure and I could live for another 50 years, which kind of actually scares me more than the thought of death weirdly enough because I’ve lived my whole life in this bubble of like you’re going to die soon. You will die before you become an adult. And now like, you know, I could actually become adult and that’s terrifying as well.

So really if I think too far in any direction, I get panicked.

It seems, along with raising awareness and being a voice for others suffering from CF, Claire seeks to spread the message that we must all live in the moment.