The Boy’s Hand That Was Printed: The Innovative Technology That Is Changing The World 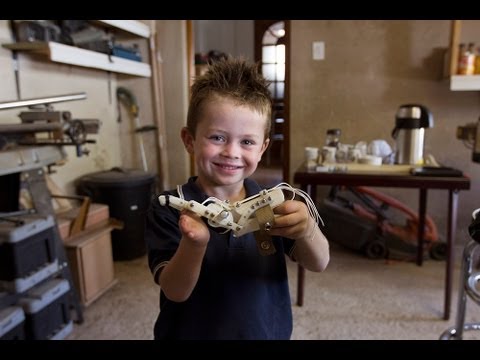 What Is A 3D Printer?

A 3D printer is a unique piece of technology that reads a digital computer file and then, through the use of a specific composite or polymer material, creates a physical object from the file.

3D printing technology is used for both prototyping and distributed manufacturing with applications in architecture, construction (AEC), industrial design, automotive, aerospace, military, engineering, civil engineering, dental and medical industries, biotech (human tissue replacement), fashion, footwear, jewelry, eyewear, education, geographic information systems, food, and many other fields; it has been deemed by manufacturers as a potential trigger for the next industrial revolution.

Recently two Swiss architects made headlines after beginning an innovative project in which an entire room was built using a 3D printer. Michael Hansmeyer and Benjamin Dillenburger put their computational abilities to the test by using algorithms to design the room’s intricate cathedral-like interior. The project utilized gigantic sandstone parts which were carved out by a large 3D printer. The uniqueness comes with the some 260 million surfaces of the sandstone room, printed at a resolution of a tenth of a millimeter. The room is titled “Digital Grotesque,” modeled after a medieval grotto, and took an entire month to print.

To print out the sandstone parts that made the room, the duo used a massive Voxeljet 3D printer, about the size of a large room. “It can print a single piece that weighs 12 tons, yet at a layer resolution of 0.13 millimeters,” says Hansmeyer. “This combination of scale and resolution seemed unreal to us at first.”

The 3D room was a massive task to take on considering something so large had never been printed before, but the architect duo believe that fabrication methods used to print the room will open the door to printing architecture -giving designers unimaginable leeway with the types of buildings that can be created. This new software and technology will hopefully allow old and weathered buildings to be restored as well.

Take 12-year-old Dylan Laas, missing his right hand because of something known as Amniotic Band Syndrome, a condition in which parts of the amniotic sack entrap and hamper the development of fetal body parts, most often appendages. Laas now uses a relatively inexpensive, arguably unprecedented hand prosthesis custom-crafted by a 3D printer. ”It looks cool. It makes me look like Darth Vader,” Lass told Yahoo.

Laas owes his new hand to South African Richard Van As, a carpenter who himself lost four fingers to a circular saw accident in May 2011. The most functionally advanced solution —a biomechanical prosthesis activated by the electrical impulses generated when contracting muscles in the arm —would have cost Van As tens of thousands of dollars. So after watching a YouTube video of a mechanical hand prop designed by Bellingham, Wash. resident Ivan Owen, Van As decided instead to build his hand replacement himself.

The result: Robohand, a 3D-printed thermoplastic limb with clutching digits and a joint-related actuator invented by Van As and Owen. According to Robohand’s website, the pair collaborated through “emails, photos, drawings and Skype-sessions” to pull the do-it-yourself prosthesis together —a device whose early-stage iteration worked so well it helped Van As resume his carpentry career.

And it really is a DIY device, costing around $500 to produce and assembled by the wearer. Think of it as a kind of plastic glove you slip over your missing hand or fingers, stitched together with cables and screws. According to an interview they did with Yahoo, Van As and Owen have so far created custom Robohands for roughly 170 people of all ages, with each hand funded through donations.

What’s next? Van As and Owen want to create DIY kits anyone could buy off the shelf at a store. And while they wait for the design patent to come through, they’re working to fill new requests, like one for a tiny, multi-colored Robohand: “This is for a 2 ½ year old in Australia,” said Van As.

The Future of 3D Printing

We are just treading the waters with the possibilities surrounding 3D printing. It is projected that within 10 years we will see the advent of 3D printed prosthetic organs such as the heart and kidneys; in fact scientists are already hard at work with this project.[3] With the Swiss architects’ new software and machinery for printing architecture, perhaps we will see entire communities being constructed from 3D printing in the near future. Other industries will most likely see the intervention of 3D printing, such as the food, electronics, jewelry, and automobile industries. It may also have a massive impact on the current state of manufacturing, as the technology is further refined and becomes cheaper and more readily available we will begin to see the printers in people’s households. From there the possibilities of creating in-home products are endless.