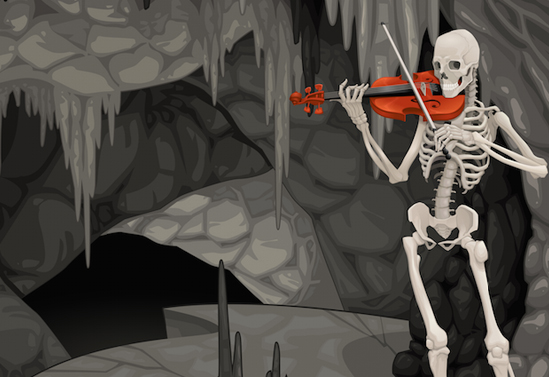 In Western musical theory, there are typically 12 notes in the chromatic scale and therefore 14 different interval possibilities (an interval is the distance between pitches). When two of these intervals are played at the same time, some of them are pleasant sounding and bright, such as the major third and perfect fourth and fifth. Others are darker, with a minor, strange or “sad” sound, such as the second or the minor third. There’s one interval, however, that’s the darkest and most dissonant of them all.

According to the OnMusic Dictionary, a tritone is…

The interval of an augmented fourth. This interval was known as the “devil in music” in the Medieval era because it is the most dissonant sound in the scale.

If you’re familiar with the piano, play a C and then play the F# directly above it at the same time. Or if you’re a guitarist, play your second string (B string) open while playing the first fret on the first string (high E string) at the same time.

THIS IS THE TRITONE, THE “DEVIL’S INTERVAL.”

Why is it known the “devil’s interval”? In the middle ages this interval was often avoided in composition because of its dissonant, clashing quality. The very sound of it suggests discord, opposition or even evil.

[With that said, this isn’t a history or music theory lesson on the tritone. If you’d like more information, check out this Wikipedia article or just Google search “tritone.”]Interestingly enough, what we consider music today wouldn’t exist without it. The dissonance created by this interval introduces drama into the tonality. As a piece of music moves along (if you listen closely enough), notes clash and then resolve, bite at your ear and then become pleasant, make you cringe and then make you smile. Without it, music would become boring very quickly.

Many of us want to sanitize our lives: pushing that which is dissonant far away, living a sheltered and safe life, avoiding the drama and fearing the darkness both in ourselves and in the world. During those times when we want life’s fucked-up twists and turns to end or for everything to be safe and manageable, let us never forget that the end of drama is the introduction of boredom, of lifelessness. Yes, there are shitty days and terrorists, jock itch and natural disasters, but at least in this dimension – in this life – everything that we know and experience couldn’t exist without them.

Let’s transform the previous sentence from above:

AS *LIFE* MOVES ALONG, IT CLASHES AND THEN RESOLVES, BITES AT YOU AND THEN BECOMES PLEASANT, MAKES YOU CRINGE AND THEN MAKES YOU SMILE. WITHOUT THE DRAMA, LIFE WOULD BECOME BORING VERY QUICKLY.

When we learn to accept that the dance of harmony and dissonance, the clash of good and evil, is exactly the very thing that makes the world go ’round, we’re free to participate in it with joy. We can be happy to roll with the punches and navigate a complicated and tricky existence without frustration, but rather with the acceptance that it has to be this way. This isn’t to say we have to be tolerant of the various kinds of evil or injustice we experience – let us fight them with vigor when we need to – but all the while knowing that in some grand, meta-narrative, it is all – ALL – good.