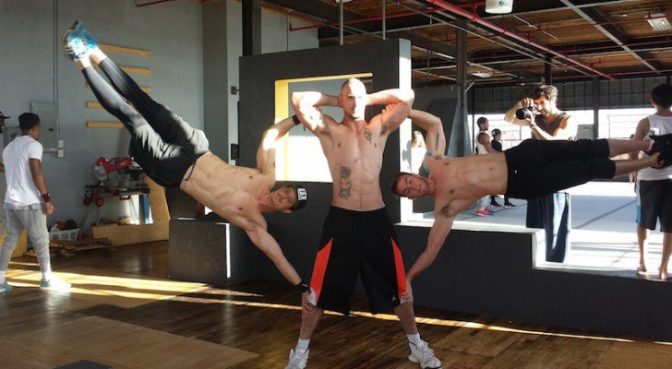 Carlos Salas was halfway through his architect degree at OCAD university when he was faced with a mid-university crisis. The passion and excitement he had once felt for his studies had suddenly disappeared.

Looking for the nearest escape route, he jumped into an exchange program that took him all the way to the “city of angels” itself. There, in L.A., he ventured to one of the city’s most infamous areas, Venice Beach, a grungy, beachfront neighborhood inundated in graffiti and cannabis shops and known for its population of iron-pumping junkies, once showcased in the popular LMFAO music video for “Sexy and I Know It.”

It was there where Carlos would soon find his salvation. After noticing a group of people working out on the beach who were solely utilizing bar setups and their body weight, Carlos was intrigued.

He approached the group, who as it turns out were a refreshingly friendly bunch, and was asked to try it out for himself.

Although Carlos could hardly even do one pullup at the time, he explains how he was immediately hooked, not only because of the unique style of exercise, but more so due to the sense of brotherhood and motivation that he felt around these people, who were all cheering him on.

It was this support network that kept Carlos coming back to the same spot week after week – and a new love for calisthenic exercise was quickly born.

When it was time for Carlos to return to Toronto, he was shocked by the lack of parks equipped to host calisthenic workouts.

However, this prompted him to start his own movement, called “TO Bars,” in the hopes of creating a community and support network like he once had in L.A.

It wasn’t long until Carlos was contacted by a man with a similar vision by the name of Dwayne Delves.

Dwayne, who started his fitness journey as a private boxing trainer, had already started his own calisthenics gym in Toronto, called Body By Chosen.

Dwayne’s fitness manifesto asserts exercise as a life-changing, empowering, and team-driven experience – the exact environment Carlos was in search of. Naturally, the two of them clicked, and Carlos joined the Body By Chosen team soon after.

Under Dwayne’s leadership, Body By Chosen has become a fast-growing fitness movement that aims to do more than simply teach people about fitness.

His team  has its own mentorship division which has worked with thousands of kids at city shelters and schools and impacts the lives of over 100 clients weekly with a range of bootcamps and personal training sessions at a modern facility in downtown Toronto.

“As soon as you walk into our gym you will feel welcome and invited,” says Dwayne. “Behind the small-size gym space and narrow corridors lay our fundamental values of creating a tight-bond community, a team-spirited approach to training and the lifestyle based on healthy body and strong mind. If these values resonate with you and you are looking for a home away from home, you are always welcome.”

How Calisthenic Fitness Can Change Your Life

Carlos explains how the Body By Chosen team promotes an LTMA lifstyle, that is, less talk, more action.

“We try to inspire people to follow their passion and dreams, reach their goals and become better people. Through fitness and calisthenics we want to build a stronger society and a tighter community based on brother/sisterhood, positive attitude and constant inspiration.”

But be warned: calisthenics is addicting, says Carlos. It has quickly become his escape from the confines of daily stresses.

In fact, many of the people on Team Chosen can attest to calisthenics becoming a perfect outlet for life’s challenges.

“Our team is made up of people who want to make a change and who want to inspire others to be better. We all come from different backgrounds and some even have different stories of difficult immigration, drug abuse, gang association, rough childhood, bullying, etc. Many of these have been able to overcome situations in life in big part through calisthenics.“

Take Jason Crewe, for example. Within one year, Jason had lost two uncles and his father to cancer, on top of being dismissed by his job.

It is easy for these types of situations to send people down a dark road, but as Jason explains, becoming a part of the Chosen team was his salvation from that path.

“It gave me a sense of accomplishment and built up my self esteem and confidence during these tough times in my life when I felt everything was falling apart,” Jason told CE.

Adam McMartin, another Team Chosen member, found himself in a deep depression after a long-term relationship had ended badly. He and his father couldn’t see eye-to-eye, and his son was no longer in his life either, a reflection of the turmoil that his depression was creating.

Eventually, Adam became determined to turn his life around, and found calisthenics to be cathartic in more ways than one.

“It made me healthy mentally and physically, and I started seeing progress in all areas of my life. I eventually shared my passion with my son, who also found a joy in participating. My father saw the positive impact it was having on my life, and eventually we reconciled our differences,” Adam told CE. “When I lifted weights, I was always in a basement or room by myself. Now I’m at playgrounds and outside in parks around amazing people helping each other and where anyone can take part. Today, my son lives with me full time, I’m a certified personal trainer, and am in the best shape of my life.”

CE sat down with the Body By Chosen Team to hear first-hand what their fitness manifesto is all about, check it out below!

More videos from Carlos of Body By Chosen:

How To Do A Muscle Up (Steps & Progressions)

How To Do A Front Lever (Steps & Progressions)

For more information on the calisthenic approach to fitness, be sure to check out Team Chosen’s website.