The Hidden Meaning of the Starbucks Logo 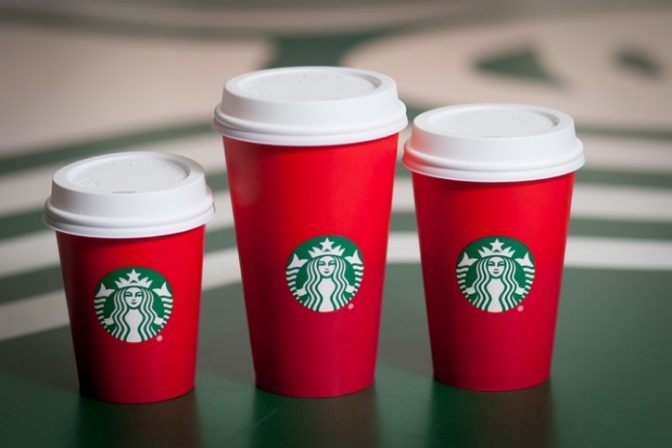 Starbucks’ decision to stay “holiday neutral” on their cups this year has been a point of contention and a heated conversation over the past few days, agitating many to believe that this decision was an intentional “war on Christmas” (see: Red Cup Controversy).

According to Jeffrey Fields, VP of Starbucks, the concept was for the holiday cups to be a blank canvas, allowing customers to create their own stories, “inspired by the doodles and designs that customers have drawn on white cups for years.” Stating:

“In the past, we have told stories with our holiday cups designs,” Jeffrey Fields, Starbucks vice president of Design & Content, said in astatement. “This year we wanted to usher in the holidays with a purity of design that welcomes all of our stories.”

What is interesting to note, is that the whole “red cup” controversy is pretty silly when you take into account that since the inception of Starbucks – their logo (which emblazons every cup) actually is highly esoteric in nature.

While The Little Mermaid portrays Ariel as a quirky, curious, beauty with hopes of exploring the world…according to Greek mythology, mermaids, or sirens, were predatory seductresses that would seduce sailors with songs and promises of sex – and then kill them.

The original Starbucks logo had a twin-tailed mermaid, known as Melusine. According to Wikipedia the tale of Melusine is as follows:

The tale was translated into German in 1456 by Thüring von Ringoltingen, the version of which became popular as a chapbook. It was later translated into English c. 1500, and often printed in both the 15th century and the 16th century. A prose version is entitled the Chronique de la princesse (Chronicle of the Princess).

It tells how in the time of the Crusades, Elynas, the King of Albany (an old name for Scotland or Alba), went hunting one day and came across a beautiful lady in the forest. She was Pressyne, mother of Melusine. He persuaded her to marry him but she agreed, only on the promise — for there is often a hard and fatal condition attached to any pairing of fay and mortal — that he must not enter her chamber when she birthed or bathed her children. She gave birth to triplets. When he violated this taboo, Pressyne left the kingdom, together with her three daughters, and traveled to the lost Isle of Avalon.

The three girls — Melusine, Melior, and Palatyne — grew up in Avalon. On their fifteenth birthday, Melusine, the eldest, asked why they had been taken to Avalon. Upon hearing of their father’s broken promise, Melusine sought revenge. She and her sisters captured Elynas and locked him, with his riches, in a mountain. Pressyne became enraged when she learned what the girls had done, and punished them for their disrespect to their father. Melusine was condemned to take the form of a serpent from the waist down every Saturday. In other stories, she takes on the form of a mermaid.

Raymond of Poitou came across Melusine in a forest of Coulombiers in Poitou in France, and proposed marriage. Just as her mother had done, she laid a condition: that he must never enter her chamber on a Saturday. He broke the promise and saw her in the form of a part-woman, part-serpent, but she forgave him. When, during a disagreement, he called her a “serpent” in front of his court, she assumed the form of a dragon, provided him with two magic rings, and flew off, never to return.[1]

Beyond the tale of Melusine, and mythological mystery of the mermaid – the other gods of the sea are amongst the most powerful in history, as water represents the power of creation which can both give, and destroy life.

For example, the Christian iconography of the fish symbol is associated with Jesus – and although it is believed to be in relation to his statement to “Peter and Andrew that if they followed him, He would make them fishers of men” – however, this mythology, too, dates back even before the Bible, and is actually relating to the Dagon god (or “fish god”) of the Philisitines.

‘Dagon is the diminutive of dag, and signifies ‘little fish;’ not so much, however, in reference to size, as to the affection entertained for it; so that some would render it, ‘dear little fish.’ The Babylonians believed that a being, part man and part fish, emerged from the Erythraean Sea, and appeared in Babylonia in the early days of its history, and taught the people various arts necessary for their well-being. Representations of this fish-god have been found among the sculptures of Nineveh. The Philistine Dagon was of a similar character.’9

Whatever holiday you choose to celebrate, it is important to see beyond the symbols and the mainstream narrative that suits our cultural conditioning, in order to find the root of what is (or was). Holidays are their own mythology (see: The Psychedelic Origin of Christmas), and history can be like the game of telephone at times, as stories get altered to suit the need of those in control of what is written.

What you choose to believe is personal to you, and a cup shouldn’t dictate or deter your celebration. Whether the cup is red, purple, green, or decorated in Christmas design, the spirit of the holidays is within you, nobody else…and regardless, year round, the mermaid still will be on the Starbucks cup – luring people to pay $5.00 (or more) for coffee with her siren songs.

To learn even more about “The Hidden Meaning of the Starbucks Logo”, the video below goes even further in-depth about the esoteric symbolism of the Starbucks logo, and the mythology of the mermaid.