The Story Of This Potty-Trained Sloth, “Danitsja,” Is Winning Over Everyone’s Hearts 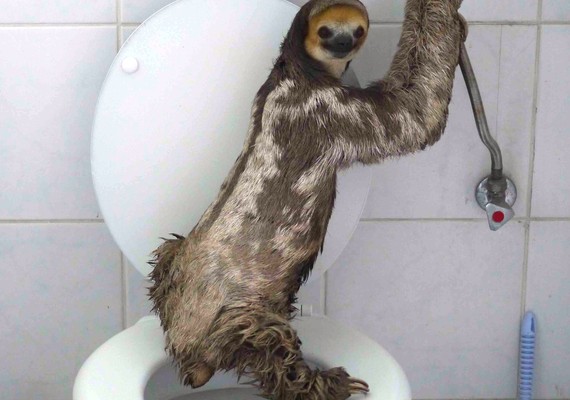 When conservationist Monique Pool rescued a very special sloth, named Danitsja, at her sanctuary in Suriname, she was shocked to discover a remarkable habit the majestic creature had brought with her.

When it was time to “do her deed,” Danitsja would elegantly (and slowly) make her way to the toilet, lower herself down into the bowl, and do her business. A potty-trained sloth.

This impeccable bathroom etiquette was unlike anything Monique had ever seen before, even after working with hundreds of rescued sloths at the sanctuary.

Though maybe not as elegant, strange pooping habits are common to the wild sloth population. While they spend most of their life high up in the jungle trees, snuggled to a sturdy branch or showcasing their latent acrobatic skills, once a week a sloth will descend to the base of the tree to do its business, a behaviour that has many zoologists puzzled, said Lucy Cooke in her article for the Huffington Post.

Zoologists  now believe the pooping behaviour of wild sloths to be a form of communication. These bizarre bathroom trips may be involved in helping these normally solitary animals mark their territory or locate a mate.

But in Danitsja’s case, the strange potty-training behaviour definitely wasn’t a wild trait. After analyzing her nails, which had been filed down, Monique knew that Danitsja had previously been someone’s pet, an illegal move down in South America.

Danitsja was discovered frightened, clinging to a woman’s fence post with an injury to the eye. It was then that she was brought to Monique’s rescue sanctuary.

The sanctuary is essentially her home, where the sloths roam freely around the house until they are ready to be released back into the wild. Monique noticed that despite her trauma Danitsja was remarkably well-adjusted to humans. So she decided to keep her separate from the other sloths.

“We kept her separate from the other animals that we had here, in the bathroom. That is when we noticed that she kept not just sitting in the toilet, but she even was capable of lifting the lid herself. It was clear that she had been taught how to use the toilet.”

Danitsja’s stay lasted a full year, during which she was trained to do her business in the wild, and also where she said hello to her first child. This new baby also meant it was time to release the mother and daughter back into the wild, where Monique felt the baby would “stand the best chances of becoming a big healthy sloth in a naturally abundant environment.”

Monique’s work is both inspiring and important, but she maintains that a proper facility is needed to continue her rescue and research operation. Please visit her webpage, Green Heritage Fund, to learn more about donating to this beautiful cause.