The Surprising Origin of Abracadabra 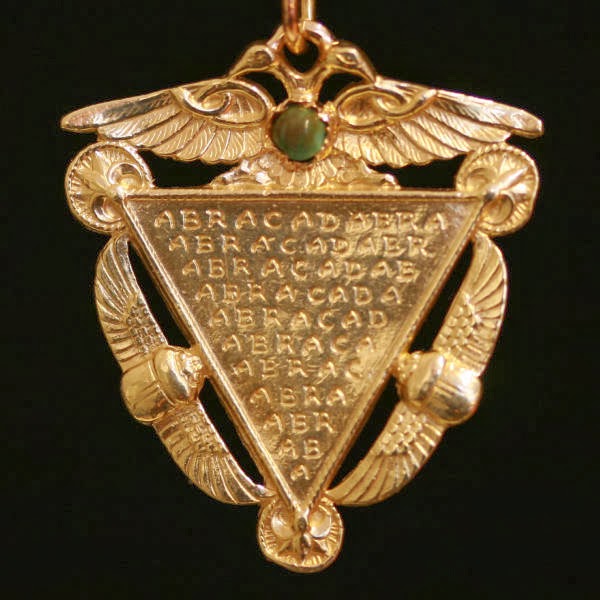 The word that’s synonymous with magic actually has an interesting origin, finding its roots back in the 2nd century AD. While the exact origins of the word are still up for debate, one of the oldest records found comes from a Roman sage named Serenus Sommonicus.

Sommonicus was physician to the Roman emperor Caracalla and would prescribe malaria sufferers to wear amulets containing the word “abracadabra” written in the form of a triangle (see below), as it was his belief that the power of the amulet could make lethal diseases go away. According to Wikipedia, other Roman emperors, including Geta and Alexander Severus, were followers of Sommonicus and may have used the “Abracadabra” incantation as well.

Other theories suggest the origins of the word stem from the word “abraxas,” whose letters in Greek numerology add up to 365 (number of days in the year). While others believe that the word is derived from the Hebrew words for “father, son and holy spirit” (“ab, ben and ruach hakodesh”), the most (phonetically) obvious answer seems to be that it was derived from the Aramaic phrase “avra kadavra” (not to be confused with “avada kedavra” from Harry Potter), which means “I will create as I speak”.

While the origins of Abracadabra are still slightly shrouded in mystery, the believed “power” of the word has not lost its potency. Aleister Crowley wrote about it in his book, The Book of the Law, but called it “Abrahadabra” (the word in what he believed as the true spelling):

Abrahadabra is a word that first publicly appeared in The Book of the Law, the central sacred text of Thelema. Its author, Aleister Crowley, described it as “the Word of the Aeon, which signifieth The Great Work accomplished.”[1] This is in reference to his belief that the writing of Liber Legis (another name for “The Book of the Law”) heralded a new Aeon for mankind that was ruled by the god Ra-Hoor-Khuit (a form of Horus). Abrahadabra is, therefore, the “magical formula” of this new age. It is not to be confused with the Word of the Law of the Aeon, which is Thelema, meaning “Will“.

“Do what thou wilt shall be the whole of the law,” the central philosophy of Themela, is strikingly similar to the notion of “I will create as I speak,” and in modern times seems to be yet another medium of manifesting through “Law of Attraction,” which is the practice of intentionally creating your own reality.

In metaphysical practice, there seems to be a fine line between magic/manifesting, and creating/attracting. Perhaps Abracadabra is the magic word to allow miraculous healing, manifesting, attracting and creating… or maybe it’s just a word, nothing more. Whatever the case may be, the history of this mystery is interesting nonetheless.