The Symphony of Oneness: An Interspecies Soundscape 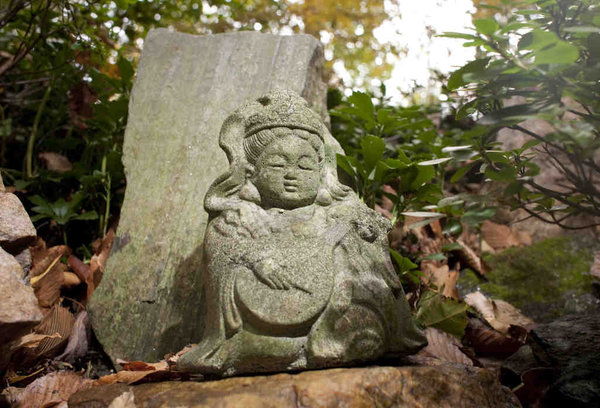 Avolokitisvara, the Buddhist Avatar of Compassion is known for their role in listening to and responding to the cries of the world. And within this philosophical and cultural framework is the notion of the bodhisattva, a being on the path to Buddhahood that embodies the teachings of the dharma and the commitment to love and serve all species all life. This is one of the beautiful flowers of the cultural garden, a distinct sounding symphony originating from within the Orient.

The Indigenous of most nations are known for their roles as ‘Keepers of Lore’ and traditions which place emphasis on the role of listening and heeding the voice of all relations. They know that their actions effect the generations to come and consider this in all of their actions. They have always strived to live in balance, close to their conception of the creator and guiding beings/ancestors. This worldview is embodied in sayings such as In La kech; I am another you, and Mitakuye Oyasin; for all my generations for the next seven generations. These are other flowers in the cultural garden of being. Keynotes in the larger symphony, from many places around the globe.  North and South America, Africa, Australia, Alaska, hold many voices of cultural wisdom saying the same things but in different ways.

The ‘Symphony of Oneness’ is an expression of the life of Planet Earth, the sounds of time- An Interspecies soundscape. Acoustic ecologists (a field of study that inspires me) speak of the voices of the natural world as geophony (sounds of earth, wind, water, volcanoes, etc.), biophony (the sounds of animals and plants), and anthrophony (the sounds originating from mankind or in relation to our activities and inventions). The Soundscape is the total sounds of a place at any given time.

Our current predicament suggests our ‘Orchestra of being’, of harmonious relationship is out of order, out of tune and out of key. The voices of anthrophony reign supreme, the voices of biophony fade as habitat is lost and monetary value eclipses relational worth. The sounds of geophony are regarded as non-essential for survival, not so core in our educated industrialized paradigm. We are not dwelling in caves anymore, so why listen for predators, or howling winds and heralding storms, (maybe we are the predators?). We block out, we tune out, we choose to what we will attune. But do we ignore our ancient instincts oriented around sound, and bring about our collective destruction in our haste to live the modern life and not take heed of the ancient knowing? Do you enjoy the voice of the birds? How does the sound of the ocean make you feel? What about the sounds within a forest? Do you hear them or do you have plugs in the ears to generate your own sound cocoon? I do it, many do it. How often do we do it? How often do you have conversation with others? Are they physically present or virtual? Beings need beings.

We are the dominant species, but our domination is destroying ourselves and all life. Realization is the key, yet can only come through love and balanced relation. Consciousness is able to ascend into greater aspects of being, as the capacity to love all and serve all grows within us. We understand, but for many it is very hard to attend to this knowing, these exalted levels of being when we are bound to survival in our daily lives. It is not impossible to act on realization in such a circumstance, but much harder, requiring different aspects of human ingenuity (which is one thing that we are very good at). If knowledge is confined only to a discipline, how can its teachings, its realizations benefit the collective? Realization is intrinsic to being, yet the specifics like pieces of the pie, or atoms of the molecule need translating into the many tongues of the human community, for the common humanity. Therefore it is the responsibility of those that do understand, who do have aspects of knowledge that relate to the whole to be stewards of all life to act from great beneficence and to be the voice of sanity to the policy makers, economists, those of might and power within the halls of high courts, who hold the reigns of civilization tight.

The symphony will play on regardless of our efforts, for we are not its only players. Yet we are fast eclipsing the players who do not conform to our vision of reality, (other life forms, the Indigenous nations, third world etc), the symphony of wilful egoist greed. We need to be guided by love and the higher principles common in all cultures. Principles of order and relation. Symphony members come and go. Their skill levels, voice and performative capacity vary. They have different hearing capacities. They occupy different places in life and within the frequency domain. At times for many reasons, beings and players become dissonant as a result of misuse of knowledge motivated by greed. There can be no ‘one unity of being’ within such diversity of a population when the ground of  being is cast aside- ‘the fundamental’ of our symphony. The fundamental allows us to sound, to be Sound and to perceive sound, as earth and the elements within it which allow sound to propagate. We abuse these elements and therefore ourselves. We are all related. We are all made of the same cell structures. The elements which constitute life on earth have of course been found elsewhere in the universe!

Just because we can does not mean we should. Our modern Symphony conductors are economists, corporations, military and governments who manipulate the masses and ‘the elected’ governments with their resources. The songs that they sing, the tunes, alluring like the Pied Piper of Hamelin- appeal to the base instincts, the essential needs, the senses, and you then have people as a “Maestro manipulating music and matter alike”.

Although this may appear cynical (it sort of comes with age), it is a perspective on our collective predicament. A specie-hood critique if you will of which I also am a player. I endeavour and would like many like me to play a symphony we all will enjoy. Where all are welcome because the concert is never ending and the tickets are free.

The Symphony of Oneness, an Interspecies Soundscape is the reality of the Sound world of Planet Earth. Its nature changes over large spans of geological time. Change- modulation is a constant on the systemic level, but when human agency has wrought in 200-300 years changes that will echo on in the valleys of future mountain ranges of earth for millennia, what are we to do? The modes of thought that got us here are what need to change. Our view of reality, our fundamental sonic upon which all of our assumptions are built, and that sonic is our modern civilization, which is the flower of the model from Ancient Greece and Rome. If we truly understood the nature of what we were doing, if we heard clearly, we would realize the need to rewrite our symphony at the level of players and actors, actions and directions for our collective specie-hood orchestra.

We must step outside ourselves for a while and step into the feet of other species, into the cell, the soul of the world. The trunk of the tree growing, the wings of the bees labouring for the Queen. There would be no toxic pesticides in my colony. Everywhere in the natural world supreme order and harmony of relations is mirrored, is sounded, and is sung in the dance of the symphony that modulates between concord and discord.

The collective stories and myths of the Great flood, the tale of Noah, tell us we have not changed much. Each round our desire nature must be transmuted, or great change will make us. We become as children forgetful of the high ways of civilizations before, and we progress down the same road and manifest in a different way. Noah embodied the repository of wisdom. Listening to guidance and making preparations and realizing the bigger picture is worth labouring for. He became, so we are told, steward to all life and protector. His role was to be the arc reaching from the old world to the new, the one to come after reconfiguration and after cataclysm. The world was repopulated so we are told. Specie-hood again evolved and diversified. We suffered great loss. We had to make sure we remembered this for the future through art, story, song, and myth all over the world.

But what we stand to lose this time is immense. Whether through just human agency or the forces of larger spans of geological changes speeding up. Do we think our sciences are evolved enough to re-engineer? Revive all life forms because we have genetic repositories, because we are mapping genomes? I don’t think we are that far along yet despite the science. We are still Mr. Frankenstein in the lab making monsters, like Monsanto cross breeding species and forms, waiting for the results of future mutations and experiments to get out of hand. What would these species sound like? Are we to be the progenitors of tomorrow’s symphony and do we even deserve to be? Do we know what divine will is? Do we know what it will sound like fifty years from now, a question Murray Schafer asked? Maybe it will just be a gentle wind blowing over the bones of the forgotten race. A slight melodic variation, due to holes in the bones of the humans. Maybe distant visitors will come and reseed the earth and clean it up. Maybe their knowledge and capacity to love is greater?.

The collective will of all species ‘is to life’. Most people given the facts and the truth, if it is within their ability to understand, will choose the will to life, to love, and to harmony. It is the great composers who govern the collective symphony as revealed in the daily song, the yearly and future forecast levels of governance that must be brought to account. They orchestrate the belief systems and social fabric, the norms entombed in the courts of the land as Law. The gnosis transmitted in the schools. They are us. The laws were revealed by all great teachers in all cultures. The laws are revealed in nature herself. If we have indeed been nurtured and seeded from the realms above and beyond this one, what is it that you think the higher forms of intelligence would want for us? What would the gods, Angels, and Avatars say now? How would they guide us?

Haven’t they all along? Is it us who fail to understand the message and listen? Maybe the greatest teachers are those species around us who sacrifice themselves so that we may come to realization and knowledge. And within it, what symphony will we play into the future? Will it be a symphony of Oneness?