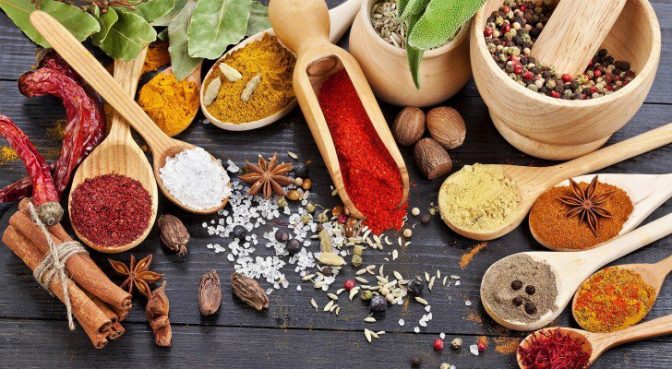 Besides the mouth-drooling aroma that your favourite herbs and spices emit, they also pack a powerful antioxidant punch that works effectively to keep your health in check.

Herbs and spices are another potent way to get your antioxidants. By flavouring your meals with herbs or spices, you are literally “upgrading” your food without adding extra calories. Surprisingly, herbs and spices contain higher antioxidant levels than are found in fruits and vegetables.

The Four Big Ones

As Dr. Mercola states in his article, Top Anti-Inflammatory Foods, Herbs, and Spices, researchers from three Universities devised an experiment to evaluate the “true world” benefits of herbs and spices, by feeding them to people in quantities that are typically consumed simply by spicing up your meals.

By breaking subjects into groups and feeding these groups a specific herb or spice, researchers were able to monitor antioxidant capacities through blood testing prior to and after ingestion. Here are the four foods they concluded had the highest antioxidant contents:

The researchers noted that even the small amount of spices or herbs normally used in traditional home dishes such as spaghetti and soup yielded amazing benefits.

The Other Top 10 Anti-Inflammatory Contenders

Another study looking for the most potent anti-inflammatory spices and herbs found the following ten contenders to be important additions to your spice rack:

Chronic Inflammation Is At The Root Of Most Chronic Diseases

As mentioned in a previous article, chronic inflammation is a silent killer that is the culprit of many chronic illnesses rampant today, including cancer, obesity, and heart disease, essentially making it the number one killer of the Western world.

This is not to be confused with the body’s natural inflammatory response to block foreign invaders from entering the body. It’s when this response becomes out of whack due to diet that we experience the aftereffects of chronic inflammation.

Luckily, we have the power to protect ourselves against chronic inflammation. Here are some other antioxidant-rich foods to make a regular part of your diet:

Leafy greens – Dark leafy greens such as kale, spinach, collard greens, and Swiss chard contain powerful antioxidants, flavonoids, carotenoids, and vitamin C — all of which help protect against cellular damage. Ideally, opt for organic and locally grown veggies that are in season, and consider eating a fair amount of them raw.

Blueberries – Blueberries rate very high in antioxidant capacity compared to other fruits and vegetables. They are also lower in sugar than many other fruits.

Matcha & tulsi tea – Both matcha and tulsi tea should be considered “super-teas,” considering their antioxidant level is 17x than found in a cup of wild blueberries. Tulsi is especially beneficial to our heart and immune system.

Fermented/cultured foods – The majority of inflammatory diseases start in your gut, as the result of an imbalanced microbiome. Fermented foods such as kefir, natto, kimchee, miso, tempeh, pickles, sauerkraut, olives, and other fermented vegetables, will help ‘reseed’ your gut with beneficial bacteria. Fermented foods can also help your body rid itself of harmful toxins such as heavy metals and pesticides that promote inflammation.

Shiitaki mushrooms – Shiitake mushrooms contain strong compounds with the natural ability to discourage inflammation, such as Ergothioneine, which inhibits oxidative stress. They also contain a number of unique nutrients that many do not get enough of in their diet. One is copper, which is one of the few metallic elements accompanied by amino and fatty acids that are essential to human health. Since your body can’t synthesize copper, your diet must supply it regularly.