The Women’s Section Of The Gym: Who Is It Really Helping? 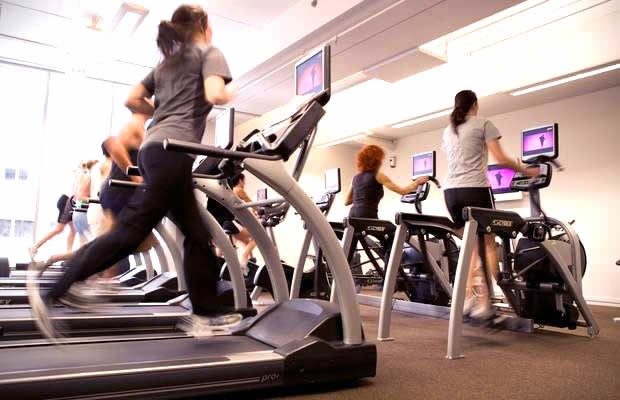 Last week during my friend Nat’s visit, we decided to get our sweat on at a local gym. After our workout in the weight room, Nat (who I lightheartedly call “Uber-man” due to her incredible strength), stopped me on our way out.

“I just want to check out the women’s section before we leave,” she said.

I followed her down a hallway to a distant corner of the gym to find the women’s only section, an area I naturally tend to avoid. I was surprised by the climax of our venture – a space inundated with cardio machines and a few weight machines.

My friend let out what could be described as both a grunt and sigh of disappointment. I asked her what was up, to which she explained her stance on the matter.

“Having women only sections of a public institution further perpetuates stereotyping  for both sexes. In order for new narratives to evolve people must be exposed to a variety of gym goers, a public space should NEVER be segregated.” Clearly she had thought about this before.

This got me thinking back to the array of women’s only sections I had come across in my lifetime. For the ones I could remember, images of lack-luster equipment flooded my memory.

She was right, the women’s only section often boasted a feeling of inferiority compared to the mixed gender areas of the gym or the male-dominated weight rooms.

Dumbbells in the women’s sections typically never surpassed 30lbs and there were no power racks or barbells for squats or dead lifts, the most quintessential exercises for any gender looking to build strength, while conversely there was almost always an overabundance of cardio machines.

This begged the question, “Is the women’s section of the gym really serving either gender? Secondly, what kind of message is this sending to the pubic?”

For the answers to these pressing questions, I took to a medium never lacking in strong, unapologetic opinions: Facebook.

Naturally, the jury was split on the matter.

Opinions varied from people seeing value in a separate section for women who were just starting a fitness routine or for women who may be self-conscious in front of men, to those who believed it only further promotes gender segregation, as well as a misleading message about women’s fitness.

One women named Lisa felt there were both pros and cons to women’s only gym sections: “For women starting out, it could make it more comfortable for them to learn the equipment. However, the big three power-lifting moves (bench, deadlift, squat) are the grandfathers of the weightlifting world and everyone should have equal access to [incorporating them into their routines] …”

Interestingly, there were a lot of women who liked the idea of  a women’s only section. Some women felt that it helped them to not worry about being seen or judged by men at the gym.

Christina wrote, “I [feel] most comfortable there. I know deep down men could care less about [what I’m doing] at the gym, but I can’t help but feel really insecure while working out with men in the same gym. I don’t know, maybe because I was bullied a lot by boys growing up?”

Indeed, this notion of feeling insecure around men was a common issue mentioned by women. Here’s what another young woman had to say:

“Psychologically, yes, I think [the women’s section] is a good thing, I know I use weights and machines more when men are not around, not that they sit and stare or anything. It’s mainly just because they are stronger and I feel weak next to them.“

Some women saw some benefit to the women’s only section, but felt the equipment typically found in these sections would not give women the strong physique they were likely working for.

Kristin O. wrote, “Having been to a few I can attest to there being less free weights, more machines and cardio equipment, the stereotypical exercise equipment that women are often seen using. The ‘ideal body’ that many women are seeking is [more efficiently] achieved through heavier weights rather than a cardio heavy regime.“

Men also chimed in with their views on the women’s section. One frequent male gym goer felt that the separate section didn’t make much sense considering how culturally we are moving away from gender segregation.

Erik wrote, “I think having a women’s section in the gym is a waste of space and is often poorly planned. It often involves throwing in female targeted machines that aren’t really of any [valuable] use, male or female.”

CE team member Mark Denicola saw it as yet another unnecessary boundary between the sexes, arguing that “The downside would be that it further segregates. We’re trying to shatter barriers, so to put more of them up doesn’t make much sense.”

Are Men & Women Really Distracted By One Another?

Surprisingly, a common theme prevalent in both men and women’s answers had to do with being ‘distracted’ or ‘bothered’ by members of the opposite sex.

Some men felt that women could be distracting in their sports-bra and workout gear, and therefore saw benefit in segregating genders at the gym.

Conversely, some women said similar things about men who oftentimes wear revealing tank tops (i.e. nip slips) or who are even seen taking their shirts off on occasion. One man even agreed that men can also be distracting to women.

“I feel like the workout gear/dress distraction is similar to the whole ‘nipple’ debate, if a guy is working out without a shirt on, I feel like no one would really care,” Lisa B wrote. “However, when a women works out in a sports bra, I find that a lot of assumptions and opinions are thrown out there.”

Then there was the issue of women being approached by men at the gym.  One woman explained that she liked having access to both areas of the gym because often when she worked out with men, it opened up the chance for her to be approached.

“I use the men’s weight room because it has more equipment, but the downside is that you are more likely to be approached by someone,” said Vanessa H. “The upstairs or ‘women’s area’ is nice because I can still do a variety of workouts and will almost certainly be left alone. It’s nice to have the option, though. “

However, Lisa B. felt that women who wear a supportive bra or tight workout gear should not be automatically be considered eye-rape fodder. “There is nothing wrong with checking out the opposite/same sex if they look good, but there shouldn’t be any ‘they asked for it,’ that reminds me of the rape mentality that some people have.“

Some men could understand how women might feel intimidated by men at the gym, and that women should be allowed to wear whatever they choose. Sean C. noted that the male college culture might have a lot to do with women feeling uncomfortable at the gym, as during this time in a guy’s life the gym may be “as much about checking out girls as it is working out.“

Natalie Mcutcheon, a British Columbia school teacher, has a progressive stance on gender specific gym sections. Her view sees the segregation as detrimental not only to our social/cultural development, but also for the health of women alike.

“The only benefits are short term, superficial benefits. Women think they feel more comfortable with no men around but in reality people are still looking at you and are still ‘judging you,’ that does not go away with the sexes. The long term affects are negative both individually and collectively.

Individually women need to be challenged and inhabit that same space as men to be seen as equal, women’s only sections are a barrier to this. Not to mention the equipment in these sections is always lacking and ineffective for what women should be doing.

In my opinion, heavy and challenging lifts to combat aging and osteoporosis as well as increasing metabolism are not possible in many of the women’s sections as the cardio machines and resistance bands take up the space. This sends the message to women that these are the exercises they should be doing and as most people are unsure about where to start this is what they do.”

Moving forward, Mcutcheon suggests that women must begin seeing these separations for the limitations that they are:

“The only way this can change to suit both sexes is to get rid of it completely and create a sense of celebrated inclusion and diversity at the gym. If women say they feel uncomfortable with men staring, this will only worsen if we continue to retreat into hidden rooms.”

We Want To Hear Your Thoughts

While discourse around gender equality is a hallmark of today’s progressive public values, there is still much to be settled in terms of moving forward as an equal collective. Women’s only sections of the gym stand as important fodder for change in many ways, which is why it is crucial for everyone to participate in these critical discussions.

We want to hear your thoughts on this matter, do you think that women’s only sections at gyms serve either gender? What sort of message do you think this is sending to the public? Share with us in the comment section below!