This Aluminum Graphite Battery Could Charge Your Smartphone In 60 Seconds 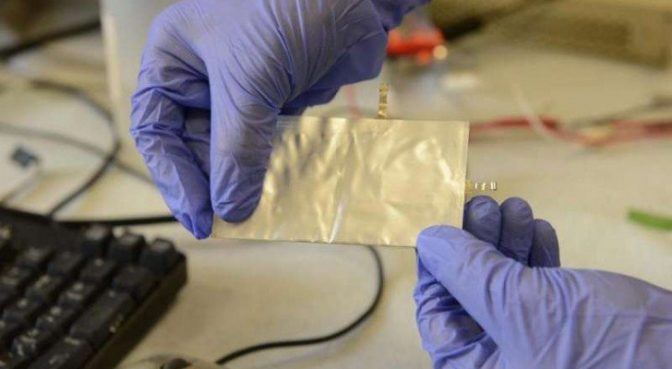 Stanford researchers are developing an aluminum graphite battery for smartphones that is non-combustible, charges your phone within one minute, and can last up to 7500 charging cycles without losing capacity.

The smartphone could easily be considered one of the greatest triumphs of the modern era. Billions of people currently sport these handy “micro-computers,” giving us instant access to information like no other generation could have ever imagined. Every year, they’re bigger, faster, and more intricate.

That being said, there are a few issues that smartphone consumers continually face on a daily basis, the main one being battery life. Indeed, while the issue may serve as a prime example of a “first-world-problem,” this notion doesn’t make the constant and rapid smartphone battery drainage any less of a pain in the butt for consumers.

Thankfully though, the good ol’ researchers over at Stanford have been working diligently to solve this issue, proposing an ultra-fast-charging aluminum battery that could be produced on a mass scale.

“We have developed a rechargeable aluminum battery that may replace existing storage devices, such as alkaline batteries, which are bad for the environment, and lithium-ion batteries, which occasionally burst into flames,” said Hongjie Dai, professor of chemistry at Stanford, in a statement to Phys.org. “Our new battery won’t catch fire, even if you drill through it.”

The aluminum-ion battery contains a negatively charged anode and a positively charged graphite cathode. Researchers placed the two inside a flexible polymer-coated pouch with an ionic liquid electrolyte.

Aluminum has always been a compelling material for battery design -it’s inexpensive, nonflammable, and has enormous potential – but historically proved too difficult to work with. The problem up until this point, the researchers said, has been in developing materials which can produce sufficient voltage after multiple cycles of charging and discharging.

As most of us can already attest, current lithium-ion batteries can take several hours to charge. But the new aluminum-ion battery blows the lithium battery out-of-the-park, with the ability to fully charge within one minute.

The researchers said that in addition to phone batteries, the aluminum-ion design could also be used to store extra capacity in renewable power grids, and the two-volt output could also be an environmentally replacement for 1.5-volt disposable AA and AAA batteries. That’s an immense amount of waste disposal saved.

But more improvements will be needed to match the voltage of lithium-ion batteries, Dai added.

“Our battery produces about half the voltage of a typical lithium battery,” he said. “But improving the cathode material could eventually increase the voltage and energy density. Otherwise, our battery has everything else you’d dream that a battery should have: inexpensive electrodes, good safety, high-speed charging, flexibility and long cycle life. I see this as a new battery in its early days. It’s quite exciting.“

While developers of the aluminum battery still have some kinks to work out, we cannot forget that the product is still in its infancy, and will likely be improved before it goes to market. Needless to say, we are excited about the potential here!

What are your thoughts on the new aluminum-ion battery? Do you think it’s a major-step forward? Or do you think developers should get more creative? Share with us in the comment section below!