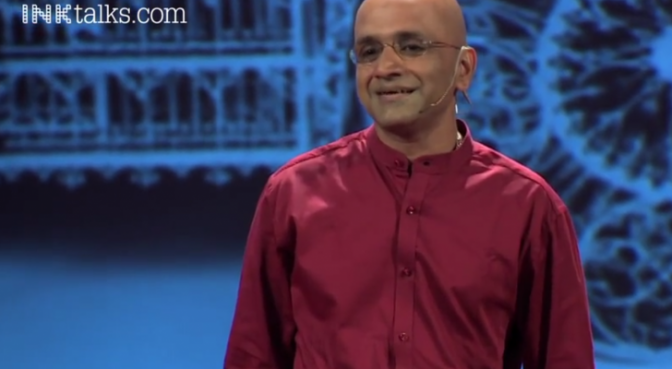 Dr. Nitin Ron is a neonatologist (aka: baby doctor), and associate professor based out of New York Methodist Hospital.

An innovator in his field, Dr. Ron believes in teaching his students the importance of love, compassion and kindness as a supplemental means to practicing medicine. He teaches this, not because this is something he merely just feels is necessary, but also because it is something he has experienced as necessary as well.

In the INKtalks video below, Dr. Ron explains the stories of baby Bruce (his personal hero) who he believes to have been saved by love, and beautiful baby Tia, saved by the innovation of medicine.

Baby Tia (beginning at 7:08 in the video) was born 28 weeks into her mother’s pregnancy, with a birthweight of 800 grams. She was unable to breathe on her own, so she required a breathing tube. After many unsuccessful attempts trying to get Tia’s lungs strong enough to not require the breathing tube, the medical team decided to use a VDR, a machine so huge it occupied half of the room in the neonatal unit. Also, this particular machine was typically only used on adults, so this innovative attempt was extremely bold.

Surprisingly, after a few days, her lungs began to breathe, and after 2 weeks she was off the respirator, and the breathing tube. Tia continued to thrive and was eventually discharged from the unit. She is now 5-years-old and an extremely happy child. Due to the advancements in science, medicine and thinking outside of the box, this little girl is alive today.

Baby Bruce was born just 26 weeks into his mother’s pregnancy, with a birthweight of only 600 grams. He, like Tia, required a breathing tube, but it was able to be taken out after a week. While he seemed to do okay at first, after 4 weeks the team discovered that Bruce had developed a case of necrotizing enterocolitis. This condition makes the blood supply to the intestine stop, which causes the tissue to necrotize, and at its worst, can become fatal. When the medical team performed surgery on Bruce to see if he had this condition, they came to find that almost all of the baby’s intestines were gone.

Dr. Ron believed that there was almost nothing they could do, and that the baby may not make it, yet he did not give up hope, and neither did Bruce’s mother. While Dr. Ron promised to do the best he could as the doctor, the mother promised to give all of the love, compassion and kindness she could to heal her baby from her heart. For 4 weeks straight, the baby’s mother did not leave his side, reading to him, speaking to him, caressing him, sleeping next to him, loving him with every fiber of her being. Then, by what seems like a miracle, the baby smiled, and as Dr. Ron stated, “babies cannot fake smiles.” Because of this, the medical team had renewed optimism, so they took Bruce back in for surgery, opened him up, and to their astonishment, large parts of the interior of his intestines had rejoined. They had never seen anything like this before…crying with delight with the extraordinary healing that occurred,  a miracle was the best way to describe what was experienced. After surgery to correct the remaining damage, Bruce was off the respirator after 3 weeks, and eventually discharged from the hospital. He is now 4-years-old, and doing extremely well.

While the advancements of science and technology helped both of these babies survive, and thrive, the power of love, compassion and kindness is what allowed healing to occur beyond all odds. Although science and technology provides us data, and allows for miracles in their own right, love is something unquantifiable, and the healing power of our hearts is a beautiful mystery beyond measure.