This Group Of Friends Spent An Entire Summer In A Guatemalan Village Living On Just $1 A Day: Their Lessons Will Inspire You 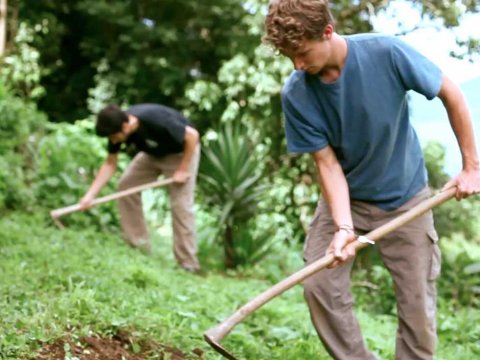 It’s a rare occasion to watch a film and have it move you in a profound way. This was the case for me after watching the hour long documentary “Living On One Dollar.” The concept was simple yet effective: A group of four economics students and friends set out on a journey to discover how to survive on just one dollar a day in a developing country. It was daring, hard-hitting and disturbingly revealing.

According to UNICEF, 22,000 children die each day due to poverty. And they “die quietly in some of the poorest villages on earth, far removed from the scrutiny and the conscience of the world.”[1] Globalissues.com states that 1.1 billion people live on less than $1 a day, a fact that became the catalyst for the four university students’ documentary.

Armed with only a video camera and a desire to understand, they spend just 56 dollars each for 56 days in rural Pena Blanca, Guatemala. They battle E.Coli, financial stress and the realization that there are no easy answers. Yet, the generosity and strength of their neighbors, Rosa, Anthony and Chino gives them resilient hope. They return home transformed and embark on a mission to share their new found understanding with other students, inspiring and challenging their generation to make a difference.

The four friends rent out a dilapidated mud hut for less than a dollar a day, where they scramble to make fires to boil their rice, beans and corn, the only three foods that they can afford on their strict budget. They quickly make friends with the village kids through their shared love of soccer, while the rest of the village is entertained by the curious presence of the westerners. The boys exchange their labour for agricultural training, where they learn to plant/weed/and harvest vegetables such as radishes.

It is discovered very quickly the dire challenges poverty poses: “At home I take a bed, stove and vitamins for granted. But here, a pad and blanket to sleep on, and a metal pot to cook with affect every aspect of life, in both the short and long term. Day by day, without adequate sleep and nutrition, how is one to overcome the stomach pain and lethargy to muster enough energy to work in the fields for 8 hours? Or in the long term, how is a child supposed to grow big and strong enough, how are they supposed to go to school when the family needs them to work? The lack of these goods therefore perpetuates the cycle of poverty.”

The real empathy presents itself with the introduction of the local village family previously mentioned, Rosa, Anthony, Chino and two other newborns. It’s a reality experienced by over a billion people every day -no access to clean water, sanitation, or proper nutrition, and no protection from nature’s unforgiving fury. Yet even in such a deficient environment, the locals maintain an inspiring sense of gratitude for what they have.

Selflessness and generosity run deep in the local’s culture, shown when Anthony invites the boys to his house for a special lunch. Even though Anthony’s family is just as poor as the students are, he and his wife Rosa share their delicacies with the boys, an act which shocks the starving students. In return, the boys invite Anthony’s family over to their hut and share with them their limited supply of beans, rice and lard. It’s a humbling moment for the students, one that paints a clear picture of what the world needs more of in their eyes. This marks the beginning of a touching bond between the students and Anthony’s family, a relationship which helps the boys learn about all aspects of local living, and in return the students share their knowledge with Anthony and his wife Rosa, teaching them about micro-financing, a budgeting and saving plan which eventually helps the family save over 1000 quetzals, doubling their family’s savings.

This concept is eventually taught to the entire village, and while not the end-all-be-all to their situation, in just three years the knowledge has begun to help meet the needs of the community at large, instilling a new hope for their future.

Coming back to US, the boys were in rough shape. They were covered in scrapes and bed bugs, they had lost over 20 pounds and one of them had contracted a severe case of E.coli. But there was a pressing question which was on all of their minds, “What do we do now?” Now thousands of miles away from Guatemala, the boys spent countless hours condensing over 300 hours of footage into a one hour documentary. Next, they presented their story at a Tedx talk, where they advocated that poverty isn’t about statistics, it’s about hopes and dreams of living people. “Moving forward, we want to mobilize all of the world to develop a solution to global poverty.” Their project went viral around the web.

From there they launched their own non-profit called “Living On One,” taking their film on tour to students all around the US. They were amazed by the amount of young people just like them who were searching for a way to make a difference. They even got to go back to Guatemala to share the film with the village to show how their story was inspiring people all over the world to create change.

“We came here to investigate how to live on just one dollar a day, already at this level, we have a great understanding of how little things make the biggest difference in the lives of the extreme poor. Whether it’s access to clean water or a new stove, these kinds of things are essential in allowing someone the opportunity to get themselves out of poverty. And it all comes back to the dirt floor in Guatemala, and the people there that changed our lives forever.”

It’s work like this that really makes a difference, bringing the reality of poverty and the world’s unethical class segregation into the homes of the masses. The good news is that together we can fix this, with a just a little bit of effort from all of us. Much love!

Check out their amazing project HERE!